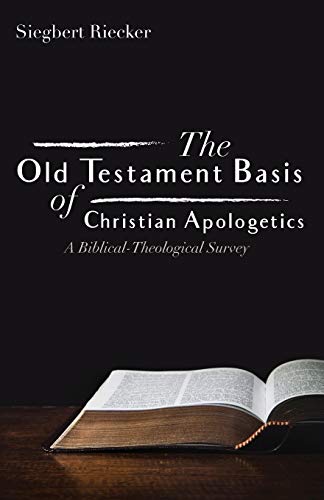 The Old Testament Basis of Christian Apologetics: A Biblical-Theological Survey

The author of this small yet important book teaches the Old Testament and Systematic Theology at Bibelschule Kirchberg (Germany) and at the Evangelical Theological Faculty of Leuven (Belgium). His ideas presented here were published in a shortened version (“Alttestamentliche Grundlagen der Apologetik. Ein biblisch-theologischer Entwurf,” ZThK 138 [2016]: 1–27). The reason for this book is Riecker’s astonishment that “in the realm of Christian apologetics, the Old Testament is only rarely considered when apologists look for a biblical vindication of their task” (p. xiii).

Chapter 1 (out of nine) outlines the meanings of the ἀπολογία word group in the New Testament and other Greek literature and New Testament. The chapter also outlines the modern efforts of systematic theology, particularly the theologians Schleiermacher and Barth. The spectrum between defense, attack and “dispute about the truth of what is believed on both sides” (p. 18) is broad. Chapter 2 draws consequences for biblical theology. Inspired by Koorevaar, Riecker follows the three parts of the Hebrew Canon and differentiates between narratives, prophetic and wisdom apologetics (chs. 4–6). However, he anticipates Genesis 1:1–2:3 as a special case because of its anti-Mesopotamian polemics (ch. 3). The following chapters are Citatory and Exemplary Apologetics (chs. 7–8). At times, the complex reality resists Riecker’s basic scheme.

Chapter 4, “Narrative Apologetics,” concentrates on the dispute with human hubris (primeval history) and the polemics against the gods of Egypt (Exod) and Canaan (Lev–2 Kgs). Riecker does not deliberate on whether Exodus 5–12 is interested much in an implicit confrontation with the gods of Egypt (explicitly only in Exod 12:12). Israelite historiography was confronted with two problems: Israel did not correspond to the ideal of obedience, and the political downfall could be interpreted differently, thus also as a failure of YHWH (p. 45). Apologetics is required here, since “theological interpretation of history transforms the identity and behavior of the individual reader as well as the believing community” (p. 46).

Chapter 5, “Prophetic Apologetics,” has the interesting subtitle “YHWH as Apologist.” Riecker puts the emphasis on idol apologetics, which he also finds in Deuteronomy and Psalm 82. Surprisingly, he says nothing about Israel’s social misconduct, although the prophets often draw attention to this disregard of YHWH. The following chapter, “Wisdom Apologetics,” also has an interesting subtitle that points to a broad subject: “Interpretation of Life and Praise of God.” The third part of the biblical canon deals with the concerns of the second in a doxological-confessional and narrative way. Here, the critical engagement with atheism (more practical than theoretical) becomes clear several times (p. 68). But in view of the little-known intentions of the Wisdom Writings, it remains questionable how far we can speak with Riecker of a public debate. And when Daniel 3 tells of a public confessional attitude, an argumentative justification before Nebuchadnezzar consciously is lacking.

Chapter 7, “Citatory Apologetics as Antithetic Proclamation,” describes a frequent prophetic argumentation back to the Torah (e.g., Exod 14:11–12). Such quotes can show a lack of trust in God or a false trust in God, a false satisfaction with the status quo, or a clear rejection of God’s claim. The following chapter, “Exemplary Apologetics: Case Learning,” presents detailed arguments (e.g., from Exod 5–12 and 1 Sam 17) to reassure readers of their faith by providing arguments for the defense of their beliefs.

A short concluding chapter, Apologetics as Challenge and Mandate, summarizes the book’s findings and deepens them with a look at modern speech-act theory (illocutionary acts). Contrary to the “terms ‘polemics’ and ‘mockery’, which have oftentimes been preferred in previous research” (p. 89), Riecker points to the fact that “the argumentation takes place on a rational level in a predominantly ‘nonpolemical’ and factual way. The texts persuade with logic (and are intended to objectively correct what has been wrongly alleged), pictorially illustrate, announce salvation or judgment, and demonstrate the fulfillment of prophecy in life and deeds” (p. 89). The biblical texts also empower lay people to faithful attitude and conduct.

The book concludes with a detailed bibliography and indexes (authors, subjects, Scripture). Its discussion is fair, and its use of a broad range of secondary literature is impressive. The author is to be thanked for working on a previous gap in biblical theology and for making many helpful suggestions. Such considerations are also important for the missionary task of Christian congregations.