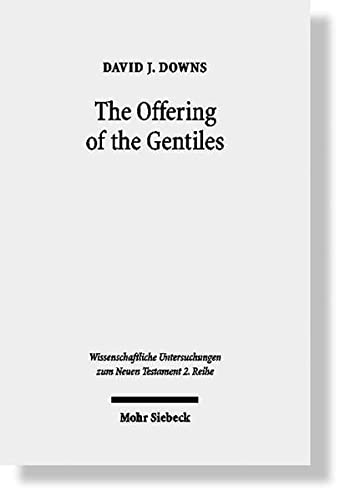 The Offering of the Gentiles: Paul’s Collection for Jerusalem in Its Chronological, Cultural, and Cultic Contexts (Wissenschaftliche Untersuchungen Zum Neuen Testament 2.Reihe)

It is likely that the level of importance with which Paul treated the financial collection undertaken by his Gentile churches for the Jerusalem church is not matched by the amount of scholarship devoted to its exploration. The collection for the Jerusalem church occupies significant portions of the Pauline epistles (1 Cor 16:1–4; 2 Cor 8:1–9:15; Rom 15:14–32), spanned the course of years of Paul’s ministry, and was something that Paul claimed he was prepared even to die for (Rom 15:30–31). David J. Downs seeks, then, in his revised dissertation completed at Princeton Theological Seminary, to examine the collection from a historical (ch. 2), socio-cultural (ch. 3), and theological standpoint. He claims that a careful study of the first two aspects will enable him to give “a much richer understanding of the place of the relief fund in Paul’s theology” (p. 2).

First, however, Downs examines the four primary scholarly interpretations of the collection. Most significant here is his rejection of the common claim that Paul viewed the collection as a metaphorical depiction of the prophetic fulfillment of the eschatological pilgrimage of the Gentiles to Zion (Isa 2:2–4; Mic 4:1–2; Isa 60:5). Downs decisively rejects this view by noting that none of the classic pilgrimage texts occur in connection to Paul’s statements about the collection. Further, Paul never emphasizes that the companions whom he is bringing to Jerusalem are Gentiles. Finally, the eschatological pilgrimage texts repeatedly mention the Jerusalem Temple as the place where the gifts are to be given, and not only does Paul never mention the temple as the locus for their gifts, he consistently indicates that the collection is for the poor Jerusalem saints (Rom 15:25). Downs also rejects the notion that the Pauline collection was an obligation placed upon Paul by the Jerusalem church leaders. He notes that whenever Paul speaks of the collection, he speaks of it as arising out of his own initiative.

In ch. 2 Downs seeks to locate the collection within Pauline chronology. Downs is convincing in his claim, contrary to many scholars, that Paul’s collection did not originate out of the Jerusalem church leaders’ command to Paul to “remember the poor” (Gal. 2:10). Rather, Gal 2:10 refers to a separate and prior relief fund undertaken by the church of Antioch for the Jerusalem church. Thus, Paul was engaged in at least two relief funds for Jerusalem—one from the Antioch church and later one from his Gentile churches. An independent witness confirming his argument is Acts 11:27–30, which portrays Paul and Barnabas as representatives of the church in Antioch engaging in relief aid for the poor in Jerusalem. Downs further notes, rightly in my view, that the Book of Acts nowhere mentions the collection and that attempts to interpret Paul’s “almsgiving” (Acts 24:17) as a brief and allusive reference to the collection are flawed. The narrator has given the reader of Acts no indication that Paul is engaged in a relief fund, and the reference, further, fits well with the portrayal of Paul as a “faithful Jew whose individual piety is demonstrated by almsgiving and worship” (p. 63). Downs provides a detailed historical reconstruction of the collection within Paul’s chronology, and he concludes that to retrace the history of the collection is to “be reminded that the seemingly mundane task of fundraising was for Paul a deeply theological endeavor, one which demanded his total commitment and perseverance through intense struggle” (pp. 71–72).

In ch. 3 Downs argues that ancient voluntary associations within the Greco-Roman world can legitimately serve as comparative models for the practices of the Pauline churches. Downs argues that the financial practices of these voluntary associations suggest that the Pauline collection was both analogous and distinct. For example, Paul entirely minimizes the honor that a donor to his collection might have expected based on the current practices of patronage and benefaction. On the other hand, there is ample evidence for associations pooling together their finances in order to support special projects. While much evidence demonstrates that similar associations had trans-local links and connections, Downs argues that Paul’s attempt to convince his churches to give their money “for the saints in Jerusalem does stand out when compared to the pecuniary practices of pagan associations” (p. 117). Many of Paul’s difficulties with the Corinthians and the collection may, in fact, have arisen out of their inability to understand why they were obligated to financially support a people so geographically distant and ethnically different from their own.

Downs’s most important contribution is found in ch. 4, where he examines the theological rhetoric and metaphors that Paul uses as a means for convincing his churches to participate in the collection. His basic thesis is that Paul presents the church’s participation in the collection with the metaphor of a cultic offering, that is, as an act of worship to God. In so doing, Paul challenges the economic ideologies of patronage and benefaction that confer honor and status upon the giver. Instead, Paul’s alternative economy originates out of God’s grace/benefaction. Downs supports his argument by noting that 1 Cor 16:1–4 indicates that giving to the collection was intended to be a significant component of the weekly Christian gatherings and that the term Paul uses for the collection (λογεία) has strong cultic overtones. In 2 Corinthians Paul speaks of the collection as originating out of God’s own χάρις. Thus, when humans participate in giving, they are simply responding to God’s own grace/benefaction, and in this manner Paul challenges the public honor and recognition that would typically accrue to the giver. While Paul’s repeated use of ἐπιτελέω in 2 Cor 8:1–12 is often translated simply as “to carry out,” the frequent usage of the term in cultic contexts for the fulfillment of religious obligations suggests that for Paul the Corinthians must give of their resources as a cultic obligation. In Rom 15:16, Downs argues forcefully that the phrase ἡ προσφορὰ τῶν ἐθνῶν should be translated as a subjective genitive, namely, as “the offering given by the Gentiles.” Downs denies that the appositional genitival reading (“the offering of the Gentiles”) that many scholars have suggested alludes to Isa 66:20 and thereby triggers allusions to the fulfillment of the eschatological pilgrimage of the Gentiles. Rather, Downs argues that the context (esp. Rom 15:16) is filled with cultic terminology, and therefore the phrase should simply be interpreted as the Gentiles’ fulfillment of their cultic obligation through financial giving to the collection.

Downs’s monograph is a tightly argued, well-written, and thorough study of Paul’s collection. I found especially convincing and significant his argument that Paul was engaged in at least two relief offerings—one originating out the church in Antioch (Gal 2:10; Acts 11:27–30) and the other originating out of Paul’s own voluntary desire and from his Macedonian and Achaean churches. Additionally, his argument that nowhere in Acts is the collection mentioned should put to rest the common scholarly assumption that Acts 24:17 is a veiled reference to it. Perhaps what is so refreshing about Downs’s work is his skillful ability to engage in historical and socio-cultural work (chs. 2–3) as well as providing a significant theological interpretation of Paul’s religious rhetoric (ch. 4).