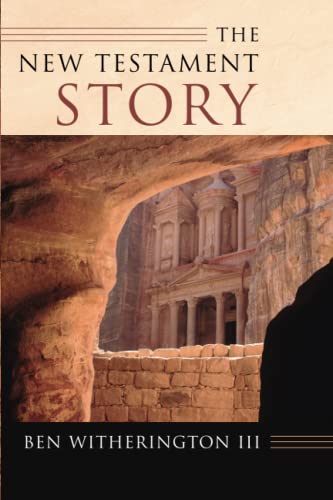 The New Testament Story reflects Ben Witherington’s extensive work within NT studies. Witherington addresses the story of the NT (its collection and assembly) and the stories within the NT (both overarching and individual stories). His aim is to introduce the text as Scripture that must retain both ‘its historical particularity’ (ix), including the influence of the OT, and its newness. Further, broader Christological concerns are central throughout his discussion of individual books.

The book has two parts. Part One is a diachronic study of the NT’s formation and origins in the Christian community. Part Two summarises the major storyline of the NT, focusing on OT stories in the NT (ch. 6); stories of Paul and Peter in the epistles, Gospels and Acts (ch. 7); Jesus’ family (ch. 8); stories of Jesus outside (ch. 9) and inside (ch. 10) the Gospels. Each chapter concludes with several questions for further study and reflection.

Part One covers basic critical matters, such as the existence of Q (a theory that he supports), the synoptic problem, and the question of genre. Witherington argues that Matthew, Mark, and John are biographies, that Luke-Acts is a historical monograph, and that an evangelistic Judean follower of Christ, probably not John the Apostle, wrote the fourth Gospel (ch. 4). As for the formation of the canon within the early church context (ch. 5), Witherington believes that ‘orthodoxy preceded canon’ (103) and that these texts primarily served public worship meetings.

Part Two begins with an analysis of OT stories used in the NT (ch. 6). Witherington continues to discuss the texts in their chronological order, beginning with Paul’s letters and concluding with the Gospels. Especially of note is his claim that Paul re-examines important OT stories and characters through Christ (120). Chapter 7 includes a useful timeline of Paul’s life and ministry (144–46) and gleans information about Paul and Peter’s lives and beliefs from their letters. Witherington defends an early high Christology in chapter 9, though he also suggests the gradual development of Paul’s ‘in Christ’ theology (206). Acts, which Witherington considers a historically reliable text, provides additional christological insights in rhetorical form. Chapter 10 accounts for the differences between the Gospels, over against an ahistorical conflation. Matthew and John largely draw on the Jewish sapiential tradition. Mark proclaims power and transformation through Jesus’ death and resurrection. Luke announces the universality of the gospel message, among other themes. Witherington exercises caution in assigning authors and locations where no author or location is mentioned.

Overall, this book achieves the author’s aims. He explains the story of NT texts without collapsing their diversity or their historical particularity. His focus on the authors and the people they describe calls attention to the fresh vitality of these books.

This book will be of particular interest to advocates of the kind of historical and narrative approaches employed by, among others Witherington and Wright. The introductory purposes of The New Testament Story require the author to state his own conclusions simply and without extensive references to the viewpoints of opponents or supporters. For example, throughout this work, Witherington assumes Pauline reliance on Jesus traditions, a minority position among NT scholars, without mentioning the controversial nature of this belief. Thus, the book is best read alongside other introductions that will orientate the reader to critical debates. In addition, while those who do not already view the NT as Scripture are unlikely to interact with this book, Witherington’s engaging writing style and simple language make this book easily accessible to beginning theology students.