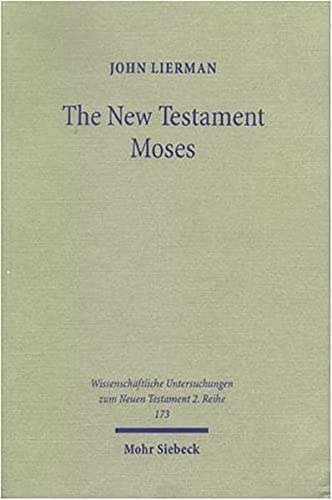 THE NEW TESTAMENT MOSES: CHRISTIAN PERCEPTIONS OF MOSES AND ISRAEL, IN THE SETTING OF THE JEWISH RELIGION

The relevance of the image of Moses in the New Testament has long been recognized by NT scholars. Prior studies, commentaries, and monographs have primarily focused upon how such Moses imagery contributes to our understanding of NT Christology, e.g. Jesus as the second Moses, Jesus as the Prophet of Deuteronomy 18 etc. As important as such connections are, this new study by John Lierman suggests that a fuller treatment of Moses in the NT is warranted so that scholars can move beyond merely Christological concerns and gain a fuller and more well-rounded vision of how early Christians understood Moses and his relationship to Israel. In particular, Lierman argues that too little attention has been given to how the NT’s portrayal of Moses helps our understanding of first-century Judaism, rather than just seeing the NT as a source for how Christians should see Moses’ relationship to Christ. In the end, argues Lierman, a clearer conception of how early Judaism viewed Moses (and how the NT contributes to that conception) will actually provide the relevant historical and theological context in which to understand comparisons between Christ and Moses, thus breathing new life into our NT Christology.

Lierman arranges his study according to how the NT portrays the various roles/functions of Moses in his relationship to Israel. Thus, there are chapters on Moses as Prophet, Moses as Priest and Apostle. Moses as King, Moses as Lawgiver, Baptism into Moses, and Moses the Focus of Jewish Loyalty. There is also a summary chapter dealing with Moses and Christology. In each chapter Lierman catalogues the contribution of a variety of Jewish sources (from the Assumption of Moses to Philo to various Rabbinic texts) to that particular role/function and then explores the relevant NT texts as well. It is clear that Lierman is well versed in second-temple Judaism and one of the book’s strengths is the vastly detailed sections which plough through a variety of these ancient sources. As a whole, The New Testament Moses is quite an impressive volume in both scope and depth and Lierman covers a lot of theological and historical ground in this single study.

However, it is precisely the vast amount of attention paid to ancient Jewish sources that raises a methodological concern in the book. The title of the book (and the introduction) suggests that the focus of the study will be upon the New Testament’s contribution to Jewish understandings of Moses. Thus, we would expect that the NT teaching on Moses would be the starting point of the study, with such passages illuminated and clarified by an examination of the ancient Jewish sources. However, at times the reader gets the impression that it is not the NT texts themselves that are driving the understanding of Moses in any given role (lawgiver, priest, etc), but rather the views of extra-biblical sources. This issue becomes particularly evident in chapters where the NT evidence for a particular role of Moses is quite scant. For example, in the chapter on Moses as Priest and Apostle, the only NT text that was cited was Hebrews 3:1–6, Moreover, that text does not apply the terms ‘apostle are priest’ to Moses at all, but to Jesus Ironically, Lierman must appeal to the broad comparison between Christ and Moses made by the author in order to suggest that such titles also applied to Moses himself; sort of a reverse typology. But, if Lierman’s study is designed to move beyond the too-often-used approach of simply comparing Moses with Christ, it is noteworthy that he must engage in that very process here to reach his exegetical conclusions. This chapter proceeds to document a number of Jewish sources that seem to affirm Moses as a priest and apostle, but one wonders whether the NT teaching on Moses is really driving the study, of whether the ancient Jewish thoughts on Moses are being read into the NT.

Such methodological concerns aside, Lierman has given the scholarly community a much-needed volume on how Moses was viewed within Second Temple Judaism and how such views were also apparent with the NT itself. Thus, Lierman is successful in his goal. He has provided a broader and fuller picture of Moses which, in the end, enriches our NT theology, and particularly our Christology.