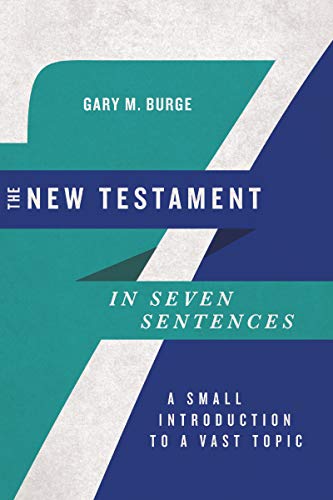 The New Testament in Seven Sentences: A Small Introduction to a Vast Topic

Gary M. Burge is visiting professor of New Testament at Calvin Theological Seminary, having previously taught for twenty-five years at Wheaton College. This book draws on his experience as a teacher, both in an academic context and on as a member of the teaching roster in his own local church. Its goal is to help the reader obtain an “aerial view” of the New Testament (p. 2), viewed through the prism of seven biblical texts that he has selected as entry-points into the seven major themes on which he focuses: fulfillment, kingdom, cross, grace, covenant, Spirit, completion.

Chapter 1 (Fulfillment) says that Paul’s ministry inspired the church to revisit Jesus, which led to the writing of the Gospels. One of the primary ideas that the Gospels affirm is that Jesus is an anointed one of God and thus the fulfiller of the messianic hope. But the Gospels make a further claim that Jesus is the Son of the living God.

In Chapter 2 (Kingdom), Burge emphasizes the centrality of the notion of kingdom in Jesus’s teachings. The mysterious nature of Jesus’s kingdom, however, caused anxiety among the authorities. Burge rightly stresses that Jesus’s kingdom—while it already is on earth—is not centered on restoring the prosperity of a political Israel. It does not necessarily mean, however, that his kingdom is something private and individualistic. Burge underscores that we all are agents of God’s kingdom because we are living in the reality of inaugurated eschatology.

Chapter 3 (Cross) shows that, while no one expected the fulfiller of the messianic hope to die, Jesus kept making predictions of his death as a ransom. So, Paul correctly understands that Jesus’s death is “a key to the gospel” (p. 52). Jesus’s cross also indicates a move from “a ritual sacrifice” to “an act of personal redemption” (p. 55). It is emphasized again that the cross is not submissive but rather subversive because it shows us how we ought to live.

In chapter 4 (Grace), Burge recognizes grace as central to the story of the New Testament. Burge traces the presence of grace in the Old Testament by showing that Abraham, too, was justified by grace. It is in Jesus, according to Burge, that we see the reappearance of this grace (p. 67). Furthermore, Paul is the “chief spokesperson of grace in the New Testament” (p. 70), which explains Paul’s dismay at the people’s relapse into self-righteous legalism (pp. 74–76). The principle of grace that God takes the initiative to be gracious toward us still holds true.

Chapter 5 (Covenant) argues that the Abrahamic covenant did not just pertain to Israel. Abraham continues to be a central figure in the New Testament primarily because it is faith that is required to belong to the lineage of Abraham (p. 87). This then implicates the Gentiles’ “full inclusion into Abraham’s family” (p. 88). Therefore, the church is now the covenant community rooted in God’s covenant (pp. 90, 93).

In Chapter 6 (Spirit), Burge claims that, while Spirit-experience was limited and selective in the Old Testament, the early church was full of it (p. 97). The expectations for the Spirit were fused into the messianic hope (p. 104). But the experience of the Spirit was promised for the Messiah’s people, too. Jesus came as “the bearer of God’s long-awaited Spirit in the world” (p. 107) after the Spirit is active throughout the entire New Testament.

One of the recurring patterns in this book is that Burge accentuates the contrast between two sides, i.e., “sin management” versus “kingdom building” (p. 41). The reader may get the impression that the faith of those who belong to the so-called “sin management” camp is simply private (p. 39) and that they are mindful only of a simple work of salvation (p. 58). Furthermore, Burge says that teachings that fail to see the larger picture of God’s theological project are “incomplete and tragically short-sighted” and run the risk of misrepresentation and reductionism (p. 134). By contrast, Burge argues that those who understand “the great theological panorama” (p. 134) know that Jesus’s cross is not only a “work of salvation” but also “a mandate for how his followers ought to live” (p. 58). They are thus those who work untiringly “to transform the world so that creation itself begins to align with God’s purposes” (p. 95). I would cautiously suggest, however, that this dichotomy is a bit too sharply drawn, and that it would seem more reasonable to assume various stances on a continuum, characterized by a variety of ways in which these two biblical themes are integrated.

As the title itself says, this book is an ambitious project that attempts to deal with a vast topic. It is laudable, therefore, that Burge has successfully provided a sound overview of the New Testament in just seven key terms. The reader will benefit from the impressive proposal of the seven interpenetrating themes of the New Testament: fulfillment, kingdom, cross, grace, covenant, Spirit, and completion.