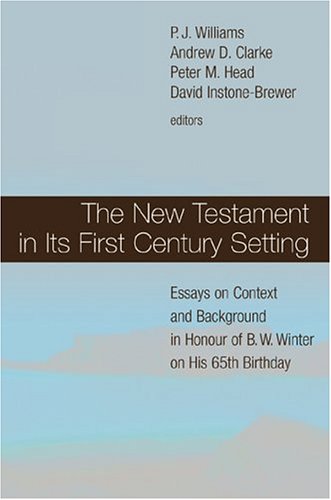 THE NEW TESTAMENT IN ITS FIRST CENTURY SETTING: ESSAYS ON CONTEXT AND BACKGROUND IN HONOUR OF B. W. WINTER ON HIS 65TH BIRTHDAY

Bruce Winter is the longest serving Warden of Tyndale House in Cambridge, having taken on this role in 1987, and finished in 2006. A few years ago, a group of former colleagues and friends produced this Festschrift in his honour: twenty-one essays aiming to look at aspects of the New Testament with a particular eye to their first century setting. One of Bruce’s emphases has been to encourage exegetes to illuminate the various parts of the New Testament by examining the culture and society in which they were written. This is something he has done both in his own writings and also in his counsel to other scholars. These essays aim to demonstrate this importance of setting and background in accurately understanding the New Testament.

The essays are divided into four sections: Gospels (six essays), Acts (three essays). Epistles (ten essays) and the Apocalypse (two essays), Some essays are more specialized than others, but most would be accessible to Themelios readers. I will highlight one or two essays in each section to give a taste of the contents.

In the first section, Rikki Watts looks at Mark 5:21–43, arguing that Mark presents these two stories (the raising of Jairus’ daughter and the healing of the woman with a haemorrhage) as part of his overall presentation of an Isaianic background to Jesus’ ministry. In particular he uses motifs from Isaiah 64—God is doing amazing things that his people did not expect.

Andreas Köstenberger considers the final two verses of the Fourth Gospel, particularly the ‘I suppose’. After examining the word in extra-biblical Greek literature, he thinks it reflects ‘authorial modesty in stating a claim or opinion’ and is a key part of the author’s argument. This first person singular ‘would suggest a single author rather than a group of authors, editors or redactors’ (87f.).

On Acts, Conrad Gempf reflects on Paul’s different mission strategies in 1 Corinthians 2:2 and Acts 17: did he change after the relative ‘failure’ of Acts 17, or was the Athens mission an exception (as Gempf thinks)? ‘Paul’s practices seem understandable in the context of what we now know about the cultural situations of the cities themselves’ (142). This essay illustrates clearly the value of understanding first century issues; in this case, the methods employed by the sophists at Corinth and the philosophers at Athens.

In the epistles section, Andrew Clarke considers Paul’s use of ‘brother’ language and how this illustrates the way in which Paul and his readers related to each other. He concludes that the term indicates a mutuality of relationships rather than an equality. In which case it does not conflict with Paul’s use of ‘father-child’ language. Howard Marshall asks why Paul used ‘head’ and ‘body’ language to develop an analogy between husband/wife and Christ/church. He looks at such language in other epistles, and thinks it likely that Paul is the originator of such ‘head’ language, this apparently not being paralleled in the first century world.

Edward Judge considers how Paul appeals to ‘convention’ or ‘custom’ in 1 Corinthians 11:16. He suggests this is misunderstood if one fails to recognize that within the church, all status is to be subordinated to a common way of life as each believer contributed his or her own gift. Brian Rosner writes a careful piece that seeks to show that Paul’s view of resurrection bodies indicates a body that is changed and suited to a new mode of existence in the realm of the Spirit. The term ‘spiritual body’ should not be taken as indicating anything that is non-physical.

Peter Walker seeks to enlighten the reader as to the setting and purpose of the Epistle to the Hebrews. He shows that it is likely to be a first century sermon from a Jewish Christian, to fellow-Jews in Jerusalem, emphasizing how their faith was to be rooted in ‘the full radiance of God’s eternal Son’ rather than in any earthly temple. Don Carson thinks that Jeremiah 31 is the part of the Old Testament being alluded to by 1 John 2:27—‘You have no need that anyone should teach you’—that God has fulfilled the promise to write the law on his people’s heart, with all knowing the Lord, and so there is no need for any intermediary teachers.

In one of the essays on the Book of Revelation, Bruce Longenecker discusses the character of the seven churches of Revelation 2–3. He argues that they were dominated by a Roman economic and imperial system. The author wrote to help the believers see that competing for Roman honours is inappropriate Rather they should be recognizing and finding honour before the One who rules over all, the sovereign Lord.

This description of some of the book’s contents hopefully gives some idea of the diverse riches it contains. Each chapter is short enough to be read quickly and its value thus ascertained. Each chapter, however, also provides illumination as to how much value is to be gained by an understanding of some aspect of the historical or cultural background to a text. New Testament studies of this kind show how exciting it is to engage in the kind of research which throws light on the text—something Bruce Winter would heartily endorse!