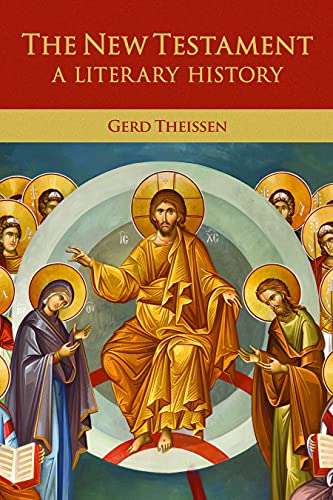 Writing ‘for anyone who is interested’ (p. ix), Theissen has produced a gripping read and a brilliant distillation of his view of how the parts of the NT arose (AD 50–130), a view he claims is ‘free from extreme theses’ (p. x). Here is a coherent explanation for the NT’s origin as literature and its relationship to the events behind the text. The titles of the nine chapters explain the basic argument: (1) ‘The “New Testament” and its Literary Forms’ (considering the analogies by which a New Testament could have been made); (2) ‘Jesus of Nazareth’; (3) ‘The Jesus Tradition in the First Generations: The Logia Source and the Oral Tradition of Jesus’; (4) ‘Paul of Tarsus’ (a man not particularly interested in the historical Jesus, but who helped develop a message which would allow Gentiles into Judaism); (5) ‘The Beginnings of the Letter Literature in the First Generation: The Letters of Paul’ (1 Thess., Gal., Phil., Phil., the Corinthian correspondence, and Rom., which is Paul’s Testament); (6) ‘The Synoptic Gospels and the Acts of the Apostles: The New Form of Literature in the Second and Third Generations’; (7) ‘Pseudepigraphical Letters: The Continuation of the Literature of the First Generation’ (2 Thess., Col., Eph., the Pastorals, 1–2 Pet., James, Jude, and Heb.); (8) ‘Johannine Writings: The Link between Gospel and Letter Literature’ (not un-Hegelian); (9) ‘The Way to the “New Testament” as a Literary Unity’ (dividing early Christianity into three literary phases: ‘fellowship with oral communication’, then ‘closed literary fellowship’ during which most of the NT was produced, and thereafter a ‘literary fellowship which is opening up’ allowing three new kinds of literature to arise: apocrypha/-apostolic fathers, apologetic literature, and Gnostic literature).

As well as being so lucid, the book helpfully contains bullet points, further reading, and a glossary. Students of any conviction can be glad to have such an accessible introduction to a common way of viewing the origins of the NT. It would serve well as a textbook for some courses. It puts its viewpoint about as cogently as it can be put. A disappointing feature of this work, however, is that it completely fails to engage with any of the possible explanations for the NT that are not naturalistic. They are not even mentioned as existing. Consequently, the author may be amazed or puzzled by aspects of his model without even allowing himself to consider an alternative: ‘They [miracles] pile up in a quite extraordinary way in the Jesus tradition’ (18). ‘Historically the appearances of the risen Christ are amazingly well attested’ (52).

The great historical riddle of the formation of the canon is that in the second century there were no central government authorities in Christianity who could have established a canon of holy Scriptures: there were no synods extending beyond regions, no bishop with an undisputed primacy, far less an emperor who was interested in the unity of Christianity. Nevertheless an amazing consensus developed without pressure (181).

Those who find the argument form Paul’s silence about written Gospels an unconvincing argument against their early date may be amused to see Theissen confess that, given that the book of Acts was written after AD 96, ‘It is puzzling that Acts contains no reference to the letters of Paul’ (110).