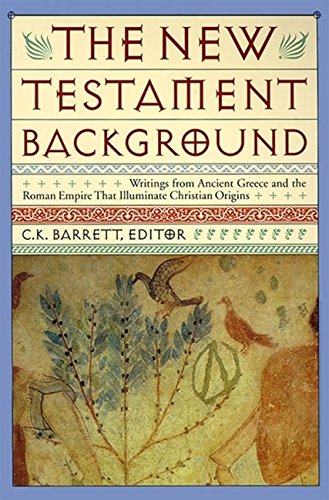 For over 30 years Barrett’s Documents have provided theological students with a fascinating taste of the world in which the NT was written. In 1956 Barrett’s book was a first (at least in English); since then many others have attempted a similar task, but for me at least Barrett’s somehow remained the most judicious and palatable selection. But it was compiled when Qumran literature was barely beginning to be noticed in NT studies, and before any of the Nag Hammadi Gnostic material was readily available. So a revised and expanded edition has long been needed.

The new edition is 85 pages longer. Much of this is accounted for by material which has newly become available during these 30 years, not only Qumran and Nag Hammadi, but Mandaean and Mithraic texts and ossuary inscriptions. Barrett has not merely added one or two new sections, however, but has worked over the whole collection in the light of his own continuing study of the first-century world. He has now decided to include small tastes of Aristotle and of the Greek dramatists, and of Juvenal’s bitter anti-Judaism. New selections appear also among the Rabbinic texts, and particular attention has been paid to Jewish biblical exegesis (remedying the remarkable omission of targums from the first edition) and Jewish mysticism.

Any such anthology must be a personal selection, and none is ever completely satisfactory. But Barrett’s mature judgment and the breadth of his knowledge of the relevant literature inspires confidence. I hope that in the next 30 years it will be not only theological students who are guided by him into a broad and enriching awareness of the world in which Christianity came to birth.

The place of biblical criticism in theological study

Did Jesus and his followers preach the right doctrine from the wrong texts? An examination of the presuppositions of Jesus’ and the apostles’ exegetical method

The Sabbath: mark of distinction

by David T. Williams
VIEW ALL VIEW ALL

The Purification Offering in the Priestly Literature: Its Meaning and function

The Story of David and Goliath. Textual and Literary Criticism. Papers of a Joint Research Venture

Israel Alive Again: A commentary on the books of Ezra and Nehemiah

History and Ideology in Ancient Israel

Reviewed by A. R. Millard
History and Historical Theology
VIEW ALL VIEW ALL