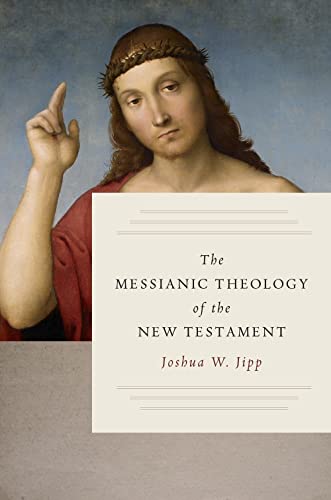 The Messianic Theology of the New Testament

According to Joshua Jipp, the field of New Testament theology has fallen on hard times. The postmodern predilection for diversity has largely curbed the output of integrative New Testament theologies. Furthermore, the few that have been written in recent decades (often in evangelical-friendly circles) have not exhibited the same degree of rigorous and vibrant creativity which marked the mid-twentieth-century contributions of Rudolf Bultmann and George Ladd. Jipp seeks to remedy the situation on both fronts with this substantial (though still relatively short) volume, aimed primarily at theological students and well-trained pastors.

Jipp’s distinctive approach is signaled by the adjective “messianic” in the title. His aim is to root a synthesis of the New Testament canon in the vocation of Jesus as the promised king of Israel. He writes, “The central argument of this book is that the messianic identity of Jesus of Nazareth is not only the presupposition for, but is also the primary (though certainly not exclusive) content of, New Testament theology” (p. 3). In other words, Jipp argues that “messianic discourse” (portrayals of Jesus as Israel’s royal king) should be the starting point for theological reflection. The foundational claim that “Jesus is the Christ” profoundly shapes everything the New Testament has to say about God, salvation, the church, and other theological loci.

Jipp is careful to qualify, however, that the New Testament writings do not express Jesus’s messianic identity in line with an artificial “preformed messianic pattern or idea” (p. 7). Jipp tries to rigorously respect the diverse ways in which the New Testament speaks about Jesus. He therefore lays out three methodological criteria for identifying messianic discourse: (1) the use of royal honorifics to refer to Jesus, (2) the presence of a scriptural citation or allusion which appeals to a messianic or ideal kingly figure, and (3) the activation of a messianic scenario or image (pp. 16–17).

With this foundation in place, Jipp organizes the book into two main sections. Part 1 consists of nine chapters (289 pp.) in which Jipp leads the reader on an exegetically rich tour of messianic discourse in Matthew, Mark, Luke/Acts, John, the Pauline corpus, Hebrews, 1 Peter, and Revelation. To provide a few examples, Jipp maintains that Jesus’s conversation with his disciples about servanthood and authority in Mark 10:42–45 portrays Jesus as embodying the characteristics of an ideal king (pp. 67–69). Jipp reads the temple scene in John 2 as an example of the expectation in Second Temple Judaism that the messiah will construct the eschatological temple (pp. 132–37). Finally, Jipp situates the Christ-hymn in Colossians 1 within the tradition of singing praises to kings in the ancient world. He shows that the hymn itself not only contains royal honorifics but also resonates with scriptural promises for a royal Davidide and an Adam-like ruler (pp. 234–38). To sum up, Jipp makes a compelling case that the New Testament compositions should be read as “creative expansions upon the earliest Christian confession that Jesus is the Messiah of God” (p. 3).

Jipp begins the task of synthesizing this material in Part 2. Over the course of five shorter chapters (91 pp.), he unfolds implications for the loci of Scripture, Christology, soteriology, sanctification/ecclesiology, and politics/power/eschatology. To provide just one example, Jipp enters the ongoing debate regarding early high Christology. He boldly affirms, “Jesus Christ’s identity as Israel’s messianic king plays a significant role in the early Christian conception of Jesus as divine and as worthy of receiving worship alongside the God of Israel” (p. 336). Following the lead of scholars such as Wesley Hill and Matthew Bates, Jipp gently but firmly critiques Richard Bauckham’s notion of “divine identity” as insufficiently nuanced. Instead, Jipp argues that the right starting point is the personal relation between Jesus and the God of Israel, with a key element of this relation being Jesus’s messianic vocation. Jipp maintains, “There is no a priori reason why we should reject the possibility that early Christian Christology developed, in part, through reflections upon Jesus’s identity as Israel’s singular messianic king” (p. 341, emphasis original).

The strengths of this volume are many. Jipp displays a thorough and careful handling of the biblical text. His index of the canonical Scriptures comprises twenty-four pages by itself, not counting non-canonical and other ancient sources. Theological students will find Jipp’s footnotes to be a veritable treasure trove of secondary literature, reflecting an immense breadth of research. Moreover, the study of Jewish messianism has often been fraught with exaggerated claims (everything is secretly messianic) or wide-ranging denials (there was no coherent messianic expectation in Second Temple Judaism). By comparison, Jipp follows thoughtful criteria and offers fulsome yet reasonable conclusions. Jipp’s synthetic chapters likewise provide fresh takes on a number of classic problems in New Testament theology, providing much grist for the mill for both theologians and pastors.

The weaknesses of the book are relatively minor and somewhat unavoidable with a work this ambitious. The messianism of the Catholic Epistles could have been explored in greater depth (though his two pages on the messianism of James [pp. 281–82] are insightful). Similarly, one wishes he could have expanded his synthetic chapters to cover more theological ground. Nevertheless, Jipp’s Messianic Theology will prove useful for students and pastors for years to come.