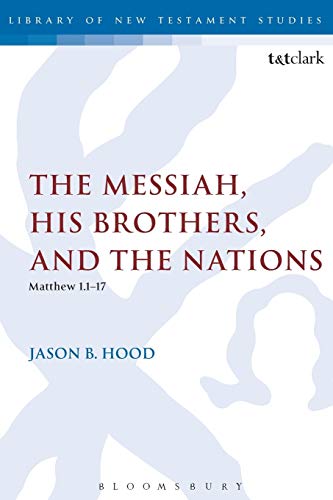 The Messiah, His Brothers, and the Nations: Matthew 1.1–17

Attempting to understand Matthew’s genealogy can feel like shoveling snow in the midst of a snowstorm; as hard as you work, you wonder if you will ever see the end. In his published dissertation (University of Aberdeen, 2009), Jason Hood contributes to this seemingly unending task by addressing two specific questions: why Matthew appended “and his brothers” to Judah and Jechoniah (Matt 1:2, 11) and why he included the four annotations about the women (1:2–6). To resolve these issues, he employs composition criticism, a method that focuses on the final form of the text while giving attention to historical extra-textual referents.

Having laid the groundwork in chapter one, Hood focuses on the literary form and function of the genealogy in chapters two and three. He emphasizes how the narrative component of genealogies (including Matthew’s) is inextricably tied to their legitimizing or sociological function. He argues, as others have done, that Matthew’s genealogy retells the story of Israel, placing it into the literary category of “summary of Israel’s story” (SIS) along with texts like Acts 7, 13, and Heb 11.

In chapter four, Hood specifically addresses the annotations “Judah and his brothers” (1:2) and “Jechoniah and his brothers” (1:11) and argues that both serve the same purpose: to point to Jesus’ self-sacrificing messianic vocation. Hood argues that Judah and Jechoniah are characterized in the OT and early Jewish literature as positive models of royal figures who sacrificed themselves “in order to remove or mitigate the threat of danger to their brothers” (p. 86). He suggests that these annotations point to Jesus’ own royal act of self-sacrifice for the sake of his own brothers, Israel.

Chapters five and six are devoted to the annotations of the “women.” Based on his presentation of the genealogy as an SIS, in which continuity is found among various characters, Hood understands (with most scholars) these four annotations as a unit, excluding the reference to Mary in verse 16. He argues, however, that the focus is not on four women, but on four Gentiles. Moreover, the fourth reference does not spotlight Bathsheba but Uriah. What unites these four (Tamar, Rahab, Ruth and Uriah) is that they are all Gentiles who are praised in the Jewish literature for their righteousness. This coincides with Matthew’s emphasis on the messiah’s vocation to the Gentiles, while still viewing two stages in Jesus’ messianic work: Israel first, Gentile second. As Hood states, “This interpretation fits with the move in recent scholarship to distinguish between two aspects of messianic restoration, that for Israel and a subsequent restoration for the nations” (pp. 161–62).

In chapter seven, Hood connects his arguments on the genealogy to the book’s conclusion, particularly the reference to Jesus’ eleven disciples worshipping him (28:16) who are called “brothers” (28:10). He sees an intentional allusion to the “brothers” in the genealogy and to Judah’s eleven brothers worshipping him in Genesis (cf. Gen 37:9–10; 49:28). The reference to the nations is another connecting thread. The naming of the Gentiles in the genealogy foreshadows Jesus’ messianic vocation to the nations; likewise, at the end of Matthew, the messiah and his brothers (Israel) call the nations to obey Jesus (an allusion to Gen 49:10).

Hood’s work is insightful and does a great deal to advance the current state of scholarship on the genealogy. Appropriately drawing out its narrative element, his categorization of it as an SIS is fitting. He makes a very convincing argument connecting the annotations in the genealogy with the conclusion of the gospel. Moreover, Hood’s overall sensitivity to Matthew’s attention to theological detail is right on the mark.

I do, however, have a few criticisms. While Hood does a thorough job of critiquing others’ arguments, he occasionally exaggerates the strength of his own, going so far as to say that his analysis of the four women “has no weaknesses” (p. 118). He also spends too much time on the categorization of the genealogy as an SIS, a categorization that does not always help his argument. For example, in using this category to argue for unity between the four Gentile references, Hood misses the fact that SIS texts often include individuals with the intention of evoking memories of different events along the trajectory of Israel’s history (Acts 7, 11; Hebrews 11). Thus, one might use this same categorization to argue against Hood’s attempt to unify these references. Moreover, by uniting their meaning simply as “praiseworthy Gentiles,” Hood may actually be diminishing Matthew’s theological storytelling intent. For example, by arguing that Matthew primarily sees Uriah as a praiseworthy Gentile, he misses the importance of David’s sin, the consequences of his actions, and the effect within Israel’s story. Regarding the scope of his work, and considering Hood’s criticism that the genealogy is too often interpreted apart from the entire book, it is surprising that he did not pay more attention to the entire book. The middle portion of Matthew’s gospel receives only passing references. Hood would have done well to trace his argument throughout the whole of the book.

Despite these criticisms, Hood offers a measure of clarity on one of the most challenging pericopes in Matthew. His work is as important to those focusing narrowly on the genealogy as it is to those looking more broadly at the gospel as a whole. It is a helpful move forward in getting to the bottom of Matthew’s daunting genealogy.