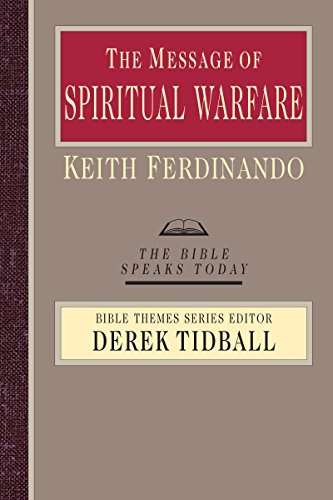 The Message of Spiritual Warfare

Written by Keith Ferdinando Reviewed By Will Brooks
Mission and Culture

Reading books on spiritual warfare is like trying to breathe in a city with rampant pollution. It’s risky business. Books on this topic are often filled with rash speculation and controversial “strategies” for engaging the enemy or overpowering demonic beings. Amid these extra-biblical discussions, Keith Ferdinando’s biblical exposition is a breath of fresh, clean air. Ferdinando is associate pastor at Woodford Evangelical Church in England. As a former professor in the Democratic Republic of Congo, a place rife with animism, he is uniquely equipped to tackle this subject.

This book has four sections. The first considers Satan, his nature, and work in a fallen world. The second section looks at the person and work of Christ. He explains how Christ accomplished victory over Satan. The next section highlights the implications of Christ’s victory for believers. Finally, the last part looks at how believers must fight sin and Satan in everyday life. In each of these sections, Ferdinando examines and unpacks specific biblical texts that relate to the theme of spiritual warfare.

One strength of Ferdinando’s work is the fact he understands that spiritual warfare is neither first and foremost about believers nor about the response of believers to the world around them. In his introduction, he writes, “Before it is the warfare of God’s people, however, spiritual warfare is the warfare of God himself” (p. 2). He then continues, “Satan, sin, and the world are all expressions of cosmic rebellion against the Creator and his will and purposes, and God himself addresses that opposition and brings it to nothing” (p. 2).

Ferdinando’s God-centered perspective of spiritual warfare is refreshing, biblical, and it grows out of his understanding of the grand narrative of Scripture. He admits that the lack of biblical evidence related to Satan and the demonic realm leads many to “extravagant speculation” (p. 6); nevertheless, he himself adopts a posture of humility and awed wonder when attempting to answer the unanswerable. When addressing the nature of Satan’s existence, he writes, “[God’s] relationship to sin and Satan is certainly perplexing beyond human comprehension, but his perfect holiness is unquestionable” (p. 9). He then writes, “In the end everything is about [God] –– the whole drama of creation and redemption. And through it all, why does he do anything but to manifest his glory, to display his own being – his eternal power and divine nature, his wondrous grace and truth?” (p. 9).

Another strength of this book is its detailed exposition. Unlike similar books, his book is not proof-texted. For each aspect of spiritual warfare Ferdinando covers, he focuses on one or two key pericopes. For example, in chapter 15, he argues that cross-shaped suffering is an integral part of the Christian life and a “central theme of the whole New Testament” (p. 180). To make his case, though, he doesn’t pick and choose verses from the whole NT; instead he provides a detailed exposition of 2 Corinthians 12:1–10, arguably the most convincing passage in the NT in making this point. Such an approach enables Ferdinando to provide detailed exegesis of these texts.

Ferdinando deftly weaves together scholarly analysis of a text with the practical application that believers need. In chapter 2, he utilizes Gen 3:1–5 and John 8:44 to explain Satan’s corrupted nature as a liar and murderer. He doesn’t stop with an explanation of these texts. He then makes several applications for believers, like the fact all believers should recognize that “lies are always at the heart of every temptation” (p. 35). These teaching points help connect detailed exposition to the everyday life of the believers.

The book’s primary weakness is that Ferdinando sometimes misses the opportunity to contradict or point out faulty understandings of spiritual warfare. In his exposition of Job, he relates Job’s suffering with Paul’s suffering in 2 Corinthians 12. He then alludes to the fact that many authors advocate the naming and engaging of demonic beings. While Ferdinando does state, “There is no suggestion in the text that [Paul] attempted any direct dealing with the demon responsible, either to bind it or drive it out” (p. 56), he never explains that many contemporary warfare authors advocate such an approach, nor does he reference them. Perhaps this lack of confrontation arises from Ferdinando’s humility and mutual respect for other scholars. That is certainly understandable. Nonetheless, it would be helpful to have more direct interaction and discussion about how his views oppose or contradict the views of others.

Perhaps the best chapter in the book is chapter 13, in which Ferdinando ties together spiritual warfare and missions by unpacking Matthew 28:18–20. He not only explains why an understanding of spiritual warfare is so essential to the church’s mission, but he also confronts faulty understandings about spiritual warfare, like the need to engage territorial spirits. The chapter’s closing words serve both as an encouragement to all those committed to fulfilling the Great Commission and as an apt conclusion to this review. He says, “Far from their natural homes [missionaries] will face hostility, persecution, and death, but as they go, they will never face these things alone – nor Satan, nor all the powers of darkness. Christ has conquered, Christ is Lord, Christ is with them – always and everywhere” (pp. 167–68).