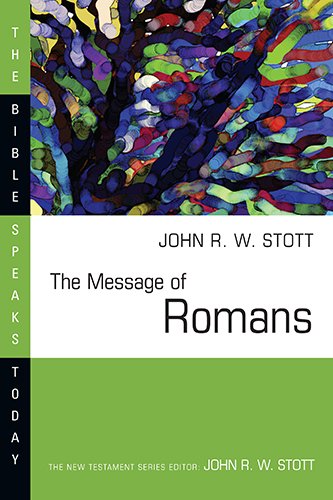 The Message of Romans: God’s Good News for the World (BST)

This contribution to the Bible Speaks Today series of expositions is destined to be a classic of its type. In the preface Stott argues that the BST volumes should have three strengths: a serious engagement with the text, an applied focus, and a readable style. In the exposition he then proceeds to deliver the goods on all three fronts. The clarity of his exposition is admirable, with numerous apt citations from a range of writers, and an orderly approach. Romans is divided into 28 manageable portions and each one of these is presented in a comprehensible manner, with preachable pegs everywhere. The very first passage gives a good example of this: headed ‘Romans 1:1–6: Paul and the Gospel’, it has the subheadings ‘The origin of the gospel is God’, ‘The attestation of the gospel is Scripture’, ‘The substance of the gospel is Jesus Christ’, ‘The scope of the gospel is all the nations’, ‘The purpose of the gospel is the obedience of faith’, and ‘The goal of the gospel is the honour of Christ’s name’.

Throughout the exposition, and without labouring them, Stott helpfully addresses a wide range of contemporary issues raised by the text of Romans. Here is readily understood exposition without too many frills, perfect for putting into the hands of someone preparing Bible studies on Romans, and useful for borrowing outlines for talks or sermons.

In a helpful preliminary essay Stott sets forth the primary framework of his exposition: Romans as a statement of the truths of the gospel of grace, understood in continuity with the Reformers. Stott interacts critically with Stendahl, Sanders, and the new perspective on Paul, arguing that there are sufficient reasons in 4 Ezra and the later Rabbinic literature to suspect that popular self-righteousness could have characterized Jews in Paul’s day and thus have been the basis for Paul’s antithetical remarks (rather than pride in Jewish national identity). Although the controversy between Jewish and Gentile Christians in Rome is said to ‘be heard rumbling throughout Romans’, the tendency here, and more especially in the exposition proper, is to emphasize general theological truths. Indeed, other than a change of mind on Romans 7, the exposition throughout seems solidly Reformed in orientation. (In Men Made New Stott took the view that the person depicted in 7:14ff. was a mature, believing Christian; here he acknowledges the weaknesses in the traditional Reformed view and opts for a compromise position: the person is an OT believer, regenerate but lacking the Spirit).

Students and preachers will thus find this exposition provides a simple introduction to Romans and a valuable stimulus to exposition. They will also be aware of the weaknesses of this sort of volume, which can turn the turbulent torrent of Romans, and the battlefield of contemporary scholarship, into an ordered calm. More than once the mischievous thought popped into my mind that Stott may be clearer than Paul. Innumerable points of controversy are resolved in tidy fashion, often using good judgement and incisive argument, occasionally succumbing to the preacher’s favourite tool when faced with two or three alternative views: forging a view which combines them all (e.g. on ‘righteousness of God’ on p. 63). What emerges is certainly safe and sound, but one misses something of the struggle and the passion to which Stott alludes in his preface and which were clearly present in the lifetime of study reflected here, but which have actually been masked by the air of measured calm that pervades the exposition (but not the apostle’s original composition). Obviously, there is more to Romans than can be contained even in the biggest and best Bible Speaks Today.