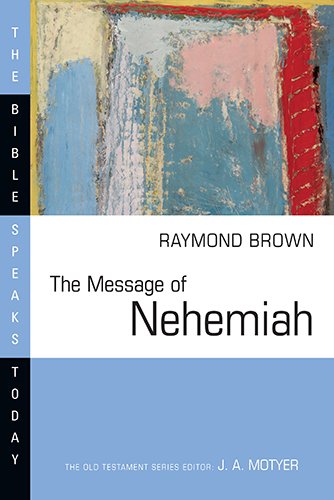 The Message of Nehemiah. God’s Servant in a Time of Change (BST)

As the thirty-seventh volume, this book joins a long established series that has a distinctive place among Bible commentaries. Having already contributed two volumes (on Deuteronomy and Hebrews), Brown is evidently comfortable with the series style, producing a book that is extremely easy to read. In keeping with that style, the discussion of background material and technical issues is especially brief: a mere four pages, in which he adopts a traditional conservative position. The emphasis in this series lies instead on overall themes (eight pages of introduction) and a consideration of the relevance of Nehemiah to contemporary society (another four and a half pages), an emphasis that continues throughout the volume.

Brown’s study divides Nehemiah into two sections—rebuilding the walls (chs 1–7) and reforming the community (chs 8–13)—with the alliterative section headings suggesting the sermonic origin of much of the commentary. In place of a verse by verse analysis, the series style considers larger portions of the biblical text. Brown neatly dovetails the narrative into his commentary on the events before moving smoothly and easily to their implications. The ease with which some points are related to examples from recent church history and the challenges of modern life serves as an excellent model. Overall, though, I would have preferred it if the analysis had given more illustrations from and applications to contemporary life—at times it barely moves beyond 5th century BCE Israel. Chapter 13 (on Neh. 10:30–39), for instance, includes a short evaluation of the contemporary state of marriage but otherwise barely looks beyond the Bible for expansions.

Nehemiah’s uncompromising approach to faith and life makes for a commentary that will readily challenge the attitudes of readers. Whilst I occasionally found the exegesis over detailed—for instance, a full two pages on the nature and variety of fear from the statement ‘I was very much afraid’ (Neh. 2:2)—most of it is solidly based in the overall thrust of the biblical text. Brown’s study on Nehemiah 3 is especially effective, finding relevant comments in such mundane source material. Even if some of those examples betray Brown’s generation, ethical considerations are clearly drawn out and precisely stated without a heavy-handed moralism. Indeed, there are occasions when Brown could have been much firmer when stating important implications, but he apparently prefers to be under-stated and to leave readers to draw their own conclusions.

As with so many of the volumes in this series, this book functions well in two ways: first, as a source of private devotional reading with significantly more bite than the popular publications; second, as a source for ideas for developing preachers. If in the past Nehemiah has always seemed to this reader to be rather like a super-saint—always doing just the right thing, his faith always triumphant, always dependent on God through prayer and spiritual discipline—what I gained from this study was an appreciation of Nehemiah as a person beset with problems. This picture is one I can relate to and has given me renewed impetus to investigate these memoirs.

is Director of Open Learning at London School of Theology