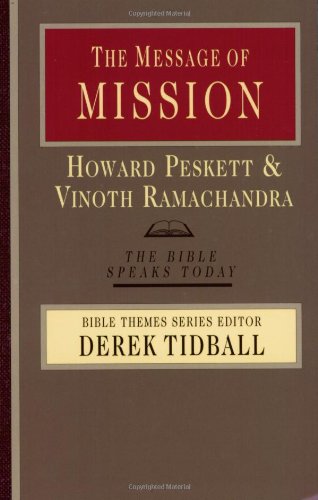 THE MESSAGE OF MISSION, BST

This is a book about the way that Scripture witnesses, in many different and exciting ways, to God’s mission, or we might say to God’s future, to his unswervable purpose expressed in creation and redemption. If this seems a somewhat ‘exalted’ description—the rather plain title The Message of Mission does not sound the same note—it is because I am trying to do justice to the perspective of the authors, and to acknowledge their achievement. The authors are experienced missionaries and missiologists and both have a fine grasp of Scripture and the gift of making it plain and relevant. They add to these gifts a sound of trumpets.

The chapters of this book might be described as a collection, or perhaps two collections, of assorted but well polished gems. The easiest thing to do is to examine them one by one. Because the book invites this approach, however, it is difficult to get much sense of its overall pattern. Even within the chapters there is a rather scatter gun approach. The first chapter, for example, essentially about the uniqueness and sufficiency of Christ in creation and new creation, includes, among other things, a quick look at ‘the powers’ (Walter Wink’s version), the need for metanarratives, the ‘foolishness’ of the cross, missio dei, John Hick’s pluralism, the colonial captivity of mission and the error of (theological) universalism. Quite an agenda for one chapter!

If the book does not treat the message of mission as a story, is there some uniting theme or themes? Undoubtedly the central theme is ‘the glory of Christ’, the subject which sets the scene in the first chapter and then is sustained by a meditation on John’s Prologue (ch. 4), a Messianic interpretation of the Servant Songs (ch. 8) and three chapters (9–11) drawing on the ministry and teaching of Jesus himself from the Gospels. An almost equally important emphasis is the uniqueness of the gospel or perhaps I should say, of the Christian faith. Chapter 3 is headed ‘The Incomporable God’. Chapter 5 challenges us to live either ‘for the promise’ or to find ourselves ‘against the promise’ (104). Chapter 6 is headed ‘A distinctive people’ and so on. I did wonder, at this point, whether the tone was not a little too adversarial. In particular, perhaps too much emphasis is put on the vindication of Christian mission by means of a history which, apparently, ‘proves’ that we Christians do things better than our rivals.

A further thought is whether the text’s determination to find roots in the Bible, enables it to find enough routes into the twenty-first century. No doubt it is a matter of balance, but I would have found a little less exegesis and a little more application helpful. Perhaps this is simply that I would have liked a longer book. Certainly a wider and deeper discussion on subjects such as the attack on the Twin Towers, the rise of international terrorism, globalisation and the information age, or the rise of Christian fundamentalism and its eschatology (just to mention few) would have been helpful.

In the end I come back to my original analogy. There are gems here. Anybody who wants to think seriously about mission will be delighted (and challenged) by what is to be found.