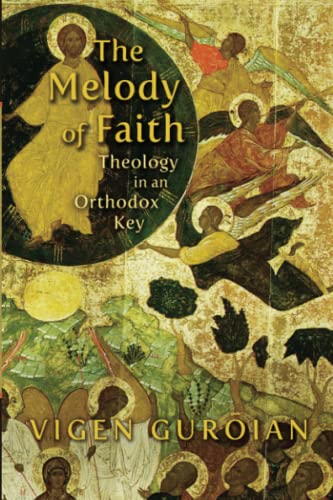 The Melody of Faith: Theology in an Orthodox Key

This reviewer has often been told by Orthodox people that one cannot grasp Eastern Orthodoxy through reading books; one has to experience it. To some degree, such a statement is true of any Christian tradition, but it is especially true of Orthodoxy, whose forms of expression and whose overarching themes are so seemingly foreign to Western Christians. But for those whose access to the world of Orthodoxy is limited to books, this new work by Vigen Guroian comes closer to enabling readers to feel the lifeblood of Eastern theology than any other book this reviewer has read.

Guroian, an Armenian-American who teaches Orthodox studies at the University of Virginia, writes in a reader-friendly, conversational style that makes this little book a delight to read. He moves effortlessly among various genres of material, analyzing quotations of the church fathers and of Eastern liturgical texts, discussing the theological meaning of certain icons, and even citing such artifacts of popular religious culture as C. S. Lewis’s Chronicles of Narniaand Mel Gibson’s The Passion of the Christ.

Guroian organizes the book around six major themes (he calls them “tone poems”) of Orthodox theology: “the litany of creation,” “the luminous moment of the apocalypse,” “divine therapy,” “Mother of God; Mother of holiness,” “the victorious cross,” and “the rhythm of the resurrection.” These are common themes in Western theology as well (with the exception—in the case of Protestantism—of the focus on Mary the Mother of God), and Guroian acquaints Western readers with the distinctive Orthodox approach to these topics. I believe that in the process of reflecting on these themes, Guroian does a service to three different audiences within the Western Christian world.

First, Guroian’s presentation speaks to a general Western Christian audience by helping to correct imbalances in our popular faith. For example, he succinctly critiques a theology of redemption that is exclusively juridical and rational, and argues for a more metaphorical theology in which the motif of healing plays a major role as well (pp. 50–51). Likewise, he emphasizes the uniqueness of humans as beings composed of body and soul and focuses the Christian hope on the reconstitution of the whole person through the resurrection of the body, not just the soul’s survival of death (p. 129). These ideas are hardly new to Western theologians, but Guroian’s popular Western audience can benefit greatly from his correctives.

Second, Guroian’s work benefits Western theologians by introducing them to some ideas that are likely to be new to them. He speaks of creation as being anthropocentric but for a theocentric purpose (p. 16). He links the apocalypse and the liturgy as a way of introducing his readers to the Orthodox belief that the liturgy transports worshipers into the eschaton, so that the church lives in both the now and the not yet at once (p. 33). And most strikingly (and at least to Protestant theologians, most disturbingly), his extended discussion of Mary focuses on her role as both the mother of God incarnate and the mother of believers (p. 66) and describes her willingness to bear the Christ as her participation in the Son’s kenosis by which our redemption was achieved (pp. 78–79, 88). These aspects of the book help to show how very different the world of Orthodoxy is from the West, and they give Western theologians a great deal to consider.

Third, Guroian’s work speaks to those of us who know Orthodoxy well by helping us to hear voices from the non-Greek and non-Slavic Eastern tradition. Not surprisingly, Guroian makes substantial use of Armenian and Syrian sources, and these sources supplement the Greek and Russian sources with which Western scholars of Orthodoxy are more familiar. The agreement between these sources helps the knowledgeable reader to recognize the substantial unity among all the Eastern churches, both Chalcedonian and Oriental. Even though these groups are not in fellowship with one another, and even though Western textbooks label the Oriental churches as “Monophysite,” the differences between them are more cultural and political than theological, and many today (including this reviewer) believe both groups are saying the same thing about Christ. Guroian’s juxtaposition of Chalcedonian and Oriental Orthodox sources—without actually addressing the “Monophysite schism”—helps to strengthen the growing consensus that the two groups share the same faith.

This short book thus accomplishes a great deal. Most important, it provides an alternative to an excessively rational way of doing theology by exposing Western readers to the concept of theology as a celebration, a song. In the process of achieving its major aim, it speaks helpfully—and sometimes provocatively, even disturbingly—to Western Christians at all levels. Guroian’s work should surely find a place as a textbook for courses on Eastern Christianity, and it will be useful as a secondary textbook for more general theology courses as well.