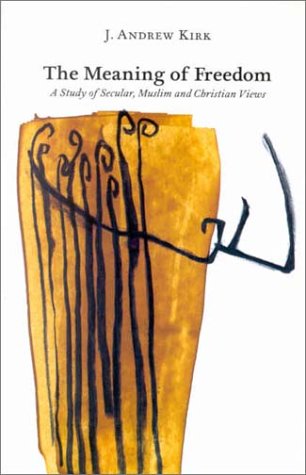 The Meaning of Freedom: A Study of Secular, Muslim and Christian Views

In the introduction to this volume the author suggests that for modern people freedom constitutes, and possibly defines, the ‘most fundamental good’. The rise and spread of modernity has resulted in a situation in which the pursuit of individual liberty in ‘free’ societies has become the chief goal of almost all people on earth. Yet there is paradox: even as the modern notion of freedom comes to define the goal toward which developing societies aspire, massive doubts have surfaced in the West concerning the adequacy of this concept as a central value. In Kirk’s words, ‘the pursuit of freedom, in so far as it becomes a self-referring goal, is intrinsically self defeating.’

Given such an introduction one might anticipate an attack on modernity and a recital of the evils flowing from the Enlightenment. In fact, although Kirk certainly subjects secular worldviews to searching critical analysis, the tone adopted here is eirenic and the purpose is missiological. Indeed, what makes this book remarkable is that it seeks to engage in dialogue with modern people concerning the nature of freedom. Andrew Kirk indicates that his book is intended to encourage people ‘who live on the basis of secular assumptions’ to understand the importance of ‘establishing an open, transparent and unrestricted dialogue with Christian perspectives concerning some of the most important human issues that affect us all …’. This is a remarkable statement that perhaps needs to be complemented by similar encouragement to Christians to enter such dialogue.

The book traces the origins and development of the concept of freedom from Greek philosophy, through seminal Christian thinkers such as Augustine and Erasmus, to the rise of modernity and the revolutionary assertion that freedom is inseparable from human autonomy. Kirk’s survey of these developments is comprehensive and informative and it concludes with a moving description of the ambiguities and tensions in the modern situation. Thus, Albert Camus is quoted as saying that ‘the task of every person thrown willy-nilly into the world is to make what he can of the freedom he possesses’. It is a short step from here to either complete nihilism or mindless hedonism and the evidence of both consequences of the loss of agreement on the meaning of human existence is all around us.

Before outlining a Christian response to this situation Andrew Kirk takes a detour to note Muslim perceptions of freedom. This is important since the most passionate and searching critiques of western anthropologies have come from this source, based on the fundamental Islamic belief that freedom is inseparable from submission to the will of God. Islamic views thus challenge secular thought and are also capable of disturbing Christians who have accepted an uncritical synthesis between faith and modernity.

In the final section Kirk outlines a Christian view of human freedom. He concludes that ultimately we are free only when serving ‘the liberating purpose of the One who is both the source, goal and meaning of freedom’. There are aspects of the author’s argument that may provoke critical questions. For example, the claim that knowledge of God apart from explicit faith in Christ is no more than ‘a fiction of the imagination’ of religious pluralists seems strangely at odds with the dialogical approach to Islam mentioned above. Kirk’s distrust of ‘religion’ is well known but seems here to be in conflict with his willingness elsewhere in the book to learn from Islamic theistic perspectives on the issue under discussion.

Overall though this is a stimulating and challenging study and in addressing modern people on a subject of central concern within Western culture, Andrew Kirk offers an admirable model of the way in which both theology and mission will need to be done in the future.