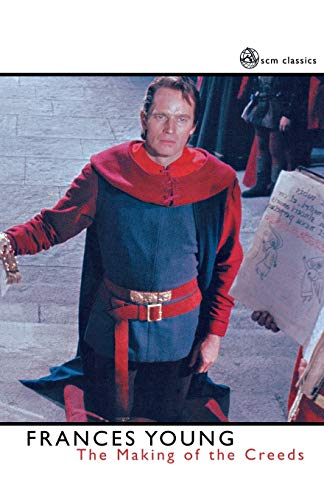 The Making of the Creeds

Frances Young, Edward Cadbury Professor of Theology in the University of Birmingham, was commissioned to write a successor to Alan Richardson’s Creeds in the Making and has fulfilled this difficult task well. The book aims to be accessible to a wide range of interested readers and succeeds in communicating concepts which seem strange to the modern mind with clarity and sympathy. Anyone wanting a short readable account of the development of patristic doctrine, either as an introduction or as revision, would profit from this crisply written book.

We are reminded initially of the character of church creeds. Originally they were summaries of faith taught to new Christians, not dry dogma but living spirituality ablaze in the mind and heart of the baptismal candidate. The NT contains credal material and Young uses the now fashionable category of story to describe the function of such creeds. The growth of the church in the context of Gnosticism and syncretism led to the need for the rule of faith, exemplified in the teaching of Irenaeus, as a standard indicating where the true faith lay. This indicates the shift in function of creeds towards a formal test of orthodox doctrine and away from the baptizands’ confession of faith. Young laments the development of tests of orthodoxy, but on the other hand recognizes the concern for questions of truth. This dialectic occurs from time to time through the book as a question without resolution.

Gnosticism forced the question ‘Is this God’s world or not?’ on the church and compelled the articulation of one God, maker of heaven and earth. Young writes particularly well on the defence of the unique creator and the development of the notion of creation out of nothing, established after Irenaeus and Tertullian. Her discussion of Athanasius and his doctrine of a re-creative incarnation in this connection is also fresh.

She rehearses the complex development of Trinitarian and Christological doctrine with panache, helpfully using much quotation from original writings. There is a healthy balance between the wider and the narrower points at issue; for example, she shows how the Platonic influence led to a hierarchical view of divine expression which was taken in a very subordinationist direction by Arius. The story of Antiochene and Alexandrian Christological dispute is well told and the reader knows the genuine sympathy Young feels for what the various theologians sought to uphold. Ecclesiological questions of church order, Cyprian, Augustine and Donatism are also recounted in highly readable fashion. Some scholars might take issue with her reference to ‘the minimal differences between the Cappadocians and Augustine’ (p. 63) over Trinitarian theology, particularly the school of thought dominant in the BCC report, The Forgotten Trinity.

Salvation is especially well treated by way of stressing the theme of re-creation at the heart of the work of Christ. This shows the subtle Christian view which rejects any ultimate dualism, but acknowledges what Young calls a certain ‘practical dualism’, given the seriousness of sin and need of redemption. Augustine’s debate with Pelagius receives mature reflection in this context.

The book cannot be said to bring any new teaching to bear on the subject; perhaps some fresh perspectives, particularly that of creation through all the doctrines. The author concludes with the question, now perhaps itself a credal test of orthodoxy, as to the lack of women in the history of theology. Women were significant in the pastoral and spiritual upbuilding of the church, and the Fathers are not to be chided by anachronistic judgments. The book as a whole contains much wisdom and maturity of interpretation. Excellent value for the theological student and also for the minister wishing for a clear and short rehearsal of the story he knows perhaps a little vaguely!