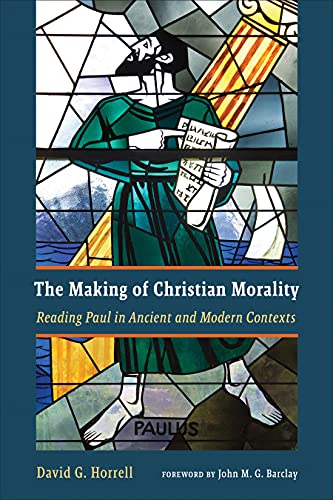 The Making of Christian Morality: Reading Paul in Ancient and Modern Contexts

David Horrell is professor of New Testament studies at the University of Exeter. His most significant work has been in ecotheology, particularly in his attempt to re-read Paul’s letters through an environmentally friendly lens in Greening Paul: Rereading the Apostle in a Time of Ecological Crisis (Waco, TX: Baylor University Press, 2010), and in his plea for revising Christian hermeneutics in light of environmental concerns in The Bible and the Environment: Towards a Critical Ecological Biblical Theology (London: Routledge, 2014).

The Making of Christian Morality: Reading Paul in Ancient and Modern Contexts is a collection of essays, all of which have been published elsewhere or delivered as conference papers. The result is a somewhat loose connection of individual entries in topics that interest Horrell rather than a cogent argument about a particular topic. Nevertheless, the essays all tend to highlight a basic assumption of Horrell’s that the apostle Paul had his own version of Christianity that is distinct from other versions of Christianity.

The book contains three parts, with each section focusing on a particular subject of concern. Part 1 deals with Horrell’s interest in the sociohistorical context of Paul’s writings. His first essay begins by ignoring the possibility of continuity between the authors of Scripture, but goes on to argue against the existence of distinct “Pauline” churches. In chapter 2, Horrell debunks some popular constructs about early church architecture largely by revealing the slim archeological evidence that some conclusions are based on. This is the most useful essay in the volume and relies on interdisciplinary research that basically calls for Christian scholars to hold their opinions until further evidence can be uncovered. The third essay argues from that Philemon may have been a middle-class Christian instead of a major patron of the church. If Horrell is correct, the financial loss of freeing a slave is much more significant and the subversive antislavery message of Paul’s letter even stronger. Chapter 4 explores the way the language of family functions in the Pauline corpus. Based on a comparison of the early “authentic” Paulines with the later “pseudo-Pauline” epistles, Horrell argues that, as Christianity evolved, household replaced family as the primary ecclesiological metaphor.

Part 2 shifts to the topic of Pauline ethics. The fifth essay emphasizes the centrality of the resurrection in Pauline ethics, but lurches to an odd conclusion as Horrell considers how that vision can help lead toward a Rawlsian consensus for ethics, which is an essential part of the liberal order as he sees it. In chapter 6, Horrell uses Pauline ethics to argue that ethics ought to be culturally determined; that is, ethics is about the enforcement of norms that are generally socially acceptable. For Horrell, then, Pauline ethics reject the model of Christians as a contrast community and promotes, instead, the idea of the church as a community that affirms the values of the culture even better than the culture. The seventh chapter explores the concept of humility as a central part of Pauline ethics, arguing that there is little unique moral content in Paul’s corpus.

In part 3, Horrell shifts to a discussion of contemporary applications of Pauline ethics. Chapter 8, which deals with various models of ethics, is largely a call to see Scripture as an insufficient basis for ethics. Horrell writes, “So, while reading Paul in the context of our contemporary debates can be suggestive and fruitful, using Paul’s texts to ‘think with’ does not by any means suffice for the task of thinking about adequate models for Christian ethics, but only marks the beginning of the work” (p. 182). In a different context that statement could be taken as hopeful, but Horrell’s intent is to reject the sufficiency and authority of Scripture and to encourage his readers to rely on other sources for moral authority. Chapter 9 approximates an abbreviated version of Horrell’s book, Greening Paul, and is another entry into the genre of revisionist scholarship that tries to recover themes from Scripture that reinforce a particular desired outcome. This essay highlights the central emphasis of Horrell’s lifelong project as he writes, “Reconfiguring our religious and cultural traditions in light of the new challenges that face us is a crucial task” (p. 207). For Horrell, Pauline studies are useful inasmuch as they power activism that matches cultural demands on topics of particular concern. The book concludes with the tenth essay, which outlines some contributions that Horrell feels Paul can make to ecojustice. However, the essay and the book end with a fizzle when Horrell concludes that Paul can be helpful to “reconfigure our vision of the world around us, and to ground a revised theology that (re)integrates humanity into solidarity with the whole community of creation––critical tasks indeed––but neither he nor any of the biblical writers can give us substantive answer to the question as to what, in concrete terms, we then should do” (p. 228). According to Horrell’s own writing, then, the best thing for people to do may be to put the Bible down and start looking for answers in the ever-evolving pool of scientific research shaped by a never-static and rarely defined summum bonum.

Horrell’s work is excellent by the measures of critical biblical scholarship. His writing is lucid and clear. Those who accept his assumptions will likely find this book illuminating and thought provoking. Christian scholars who accept the authority and integrity of Scripture will continually find themselves frustrated by the basic assumptions that seem to dictate the outcome of the analysis. Nevertheless, there is some significant value in this collection of essays, particularly where Horrell carefully treats issues related to New Testament backgrounds. Those essays make this volume a worthwhile addition to an academic library.

The Making of Christian Morality illustrates the need for Christian ethicists to continue thinking about Scripture, orthodox Christian theology, and how to apply the vision inspired by those sources to contemporary issues like creation care. Horrell provides an excellent conversation partner for those seeking to engage in such scholarship.