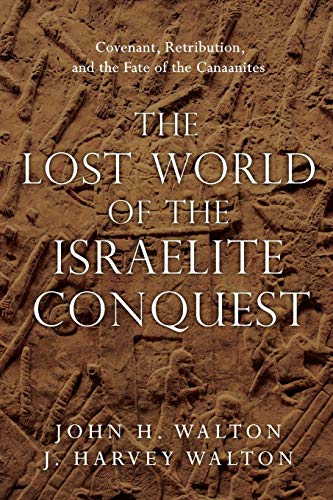 The Lost World of the Israelite Conquest: Covenant, Retribution, and the Fate of the Canaanites

Two Waltons, father and son, co-authored this third book in the Lost World series, which aims “to transcend the shackles of our modern worldview and traditional readings to recapture the text as it would have been understood by the original author and audience” (p. xi). The authors attempt to disabuse Christians of the faulty idea that God ordered the Israelites to kill the native Canaanites and to take their land by force. They argue that this misunderstanding derives from a combination of wrong hermeneutics, poor understandings of some of the key biblical passages, and a lack of familiarity with the ancient Near Eastern background of the text. Yet the purpose of the authors goes well beyond simple apologetics. They interpret the Israelite conquest in the larger context of Israelite covenant in order to give practical teachings to modern Christians.

In Part 1 they discuss the purpose of the Old Testament, which is not to provide a list of laws and illustrations to be followed, but to record God’s actions through the Israelites in order that we may understand them and participate in God’s good purposes. The problem, however, is that the Old Testament records God’s actions using the language that had meaning in the context of the ancient cognitive environment. So, in order to understand the Bible’s teaching, the authors argue, the “cognitive environment must be translated” (v. 10). If properly translated, it will provide “a template for interpreting the New Testament which in turn gives insight into God’s purposes for us today” (p. 233).

Parts 2 and 3 are intended to refute the common idea that the conquest was punishment against the Canaanites. The authors argue that no textual indicators show that retributive justice was dealt to the Canaanites. That they were idolatrous, depraved, and in no status of holiness does not make them “deserve” annihilation. The Canaanites could not “sin” because they were not bound by the covenant of Yahweh. Further, the description of the Canaanite nations as sexually depraved and idolatrous in Leviticus 18–20 is comparable to a well-established ancient literary trope about hordes of invincible barbarians called “Umman-manda” (p. 139). The point of the literary trope is to create a negative image of those who live outside the established order, not to describe the observed acts of the historical people of Canaan (p. 140).

After refuting the idea of conquest as punishment for Canaanite sinners, the authors propose an alternative view in Parts 4 and 5: the conquest was the preparation of the land for God’s special use of it. They argue that the conquest recapitulates the idea of chaoskampf, namely, removal of chaos in preparation for divine order. Just as the point of chaoskampf is the result of the battle, the point of the conquest is the new order that God establishes after the agents of chaos (the Canaanites) have been removed. Noteworthy in this regard is the author’s translation of Hebrew חרם as “to remove from human use,” rather than as “utterly destroy.” They argue that God’s חרם against the Canaanites was intended to destroy the identity of Canaanite communities lest the Israelites should use it. In other words, חרם was intended to create the conditions under which Israel could co-identify with Yahweh only. חרם was, therefore, never intended as a genocide, the killing of innocent people. Finally, in Part 6 the authors suggest some practical implications of their understanding of the conquest for modern Christians.

In this informative and readable book, the authors attempt an innovative interpretation of the Israelite conquest by re-reading some key passages concerning the conquest which, the authors claim, have been totally misunderstood thus far (e.g., Gen 15:16; Lev 18:25; Deut 9:5). The authors are to be commended for bringing some of the technical materials of the ancient Near East—otherwise unavailable to lay people (e.g., legal wisdom, the literary trope of Umman-manda)—to bear upon the passages relating to the conquest. Furthermore, the timely use of metaphors and illustrations (e.g., cultural river, baking a cake, eminent domain) help to clarify the sophisticated logic of the authors. Hence, the following criticism does not change the fact that the authors have rendered a great service by helping many perplexed Christians to navigate through some intractable issues associated with the Israelite conquest.

The authors, first of all, would have been more convincing if they had paid as much attention to dissimilarities as to similarities between the Bible and its ancient Near Eastern parallels. For instance, the description of the Canaanite nations in Leviticus 18 may be as polemical as that of Umma-manda in contemporary extrabiblical literature, but one may consider the possibility of biblical reshaping of the extrabiblical motif from its being an alien issue to its being related to universal ethics. Second, the authors could be more sensitive to the dynamic semantics of Hebrew words, as well as their historical development. For example, the semantic division between חטא/חטאת and עון is not as clear-cut as the authors make us believe. The Hebrew terms חטאת and חטא are used with respect to the pagans outside the covenantal order, contra the authors (Lam 4:22; Zech 14:19). Third, some of the authors’ exegetical conclusions are more ingenious than convincing. For instance, “Genesis 15:16 does not say that the conquest was delayed so that the Canaanites could build up a balance of enough sin to warrant their destruction; it says that the conquest was delayed so that the violence and turmoil would not occur during the lifetime of either Abraham or his Amorite allies” (p. 256). The biggest problem with this interpretation is its failure to explain the fact that the delayed destruction was not a favor given to Abraham’s Amorite allies alone: other contemporary Canaanites also avoided the violence and turmoil of the conquest. Further, if “the fourth generation” refers to the time shortly after his death, namely the time in which Abraham will “not see his offspring into adulthood” (p. 60), one is hard pressed to explain how the Israelites could possibly come back to Canaan in Abraham’s fourth generation. It is more logical to connect the fourth generation to the four hundred years of Israel’s slavery in Egypt (cf. Gen 15:13) and to argue that “the four generation” is intended to nuance the conquest as being done under the retribution principle, for the Mosaic law stipulates that one’s sin is punishable to the fourth generation. Fourth, even when accepting the thesis of this book, the reader is still left wondering why God allowed “innocent” Canaanites to be “caught up” in the destruction of the land (p. 131). Although the authors may not intend to answer this question definitively, appealing to God’s mysterious purpose or asserting that the Bible is not intended to give us universal moral principles (p. 100) comes dangerously close to moral relativism or agnosticism.

This book reminds us that our God is bigger than our questions and encourages us not to be weary in asking honest questions about his revelation in the Bible. As Kierkegaard once said, “In the longing itself the eternal is.”