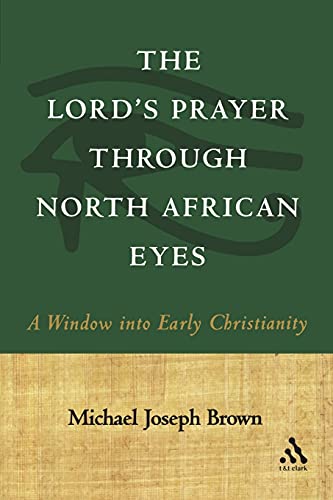 This is a fascinating book that provides an accessible account of two perspectives on the Lord’s Prayer as it appears to have been understood in North Africa in the late second- and early third-century.

The opening chapter suggests how each part of the prayer would have been most readily understood in a Graeco-Roman context. Thus Brown neatly demonstrates how the meaning of the prayer depends not only on its content, but also on how that content is understood and appropriated by each person who hears or prays its words. Taking as his base the Lord’s Prayer in its Matthean from—for it is in the Matthean form, as found in the Sermon on the Mount, that it has been known to most Christians—Brown suggests what connotations each word or phrase will have had to non-Jewish hearers outside Palestine. This provides the hermeneutical framework in which he analyses the way in which the prayer is interpreted in the writings of Clement of Alexandria and Tertullian of Carthage, each of whose writings Brown reads in the light of his reconstruction of the social and material culture of the cities in which they lived.

The book is clearly structured and a joy to read. Greek quotations are not always translated, but while this may be an unnecessary irritant to some readers, it rarely impedes appreciation of its author’s main points. Brown’s book is successful on a number of levels—as a reminder of the importance of the prior assumptions of the interpreter and his or her own context in the generation of meaning; as a sympathetic introduction to the lived theology of Clement and Tertullian, two important, but often neglected early theologians; and, last but not least, as a stimulus to continuing reflection on, and praying of, the Lord’s Prayer today.

The distinction that Brown draws between an understanding of prayer as largely conversational, expressing and developing a relationship with a God whom one wishes to honour (which he finds in Clement), and an understanding of prayer as petitionary, actually asking God to act on things that the Christian requests (which he finds in Tertullian), remains important and controversial today. Thus it is helpful to examine these early representatives of each view. (Here it is significant to note, as Brown does, that references to the Lord’s Prayer in Clement are often no more than passing—but whether this means that he deliberately omitted it from his longest discussion of prayer is unclear. Unlike Tertullian, Clement did not devote a treatise to the subject, but it is difficult to know what weight to put on this ‘omission’. Brown perhaps places too much significance on the absence of any sustained discussion of the Lord’s Prayer in Clement. Is it not possible that the Lord’s Prayer had simply not yet attained the prominence that later Christians would give it?) Similarly, by demonstrating the extent to which each author was shaped by his cultural context, Brown reminds his readers of the need to be aware of the factors that shape our own understanding of prayer and the God to whom we pray. Thus, by showing what the Lord’s Prayer has meant to Christians in other contexts, Brown challenges us to reflect on what it means for us—and for others—today.