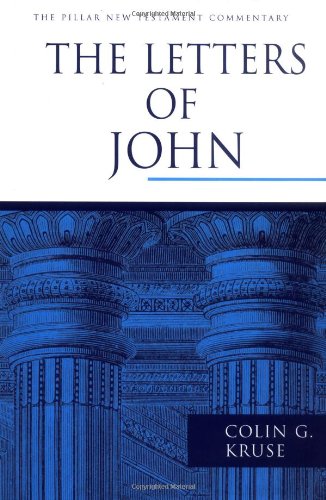 The Letters of John. The Pillar NT Commentary

This medium seized commentary offers a very accessible and reliable explanation of the three Johannine Epistles. The English text used is the NIV, but the argument is based upon the (transliterated) Greek. Despite the fact that it is more expensive than the alternatives, this commentary is a first buy for students and pastors.

Kruse’s perspective on the Epistles is dominated by the view that their author is involved in a dispute with heretics which has to do with the correct interpretation of the Fourth Gospel. In this respect his approach is not unlike that of Raymond Brown’s massive commentary, and indeed Brown is the author most frequently referred to. Both commentators thus do not read the letters as timeless tracts concerning love and light, but Kruse manages to give a very edifying exposition of these polemical writings. A major difference between Brown and Kruse is the fact that the latter unashamedly works from Evangelical presuppositions. He does not refer to many other commentators; people like J.L. Houlden, J.R.W. Stott and T.F. Johnson never occur in this book, and others are only mentioned very sparingly. Relevant articles are adduced at the appropriate places.

The first fifty pages of the volume are devoted to the usual discussion of introductory matters. Kruse first paints a convincing picture of the historical situation addressed which accommodates all three epistles and describes the contribution that each of them seeks to make. He hesitates to refer to the author of the epistles as ‘John’ mainly because he is under the spell of Eusebius’ notorious suggestion that next to the apostle John there was an elder of the same name. Nonetheless he (in my view rightly) interprets 1 John 1:1–4 as the testimony of an eyewitness. When discussing the identity and position of the adversaries, Kruse quotes at length from early Christian sources so that the readers can evaluate the evidence for themselves. I would be so bold as to venture that his final conclusions in this respect, viz. that the adversaries were docetistssimilar to the ones combated by Ignatius, would have been even sharper had he profited from interaction with my essay in Nederlands Theologisch Tijdschrift 53 (1999) 17–24, in which I refer to the Apocryphal Acts of John as a remarkable parallel. When Kruse arrives at the ever problematic questions of the genre, form and structure of the first epistle, the discussion becomes quite technical. He basically relies on D.F. Watson for his conclusions in this area.

The exposition is followed not only by indeces of authors and texts, but also by an appendix which gives the text of references to Cain (cf. 1 John 3:11–12) in the Bible and extrabiblical literature; the commentary itself, however, hardly interacts with these texts so that they are just there for the sake of interest. Interspersed between the comments there are some twenty ‘Notes’ on words or subjects requiring some extra attention. These notes are generally very helpful, not least because they are well cross-referenced and can be found in the table of contents. Only the one on the antichrist I found rather thin. In his explanation of disputed verses and subjects Kruse always first mentions the alternatives and then states his preference, though there are occasions when he frankly concedes that no firm decision can be made. Such is the case in regard to the apparent perfectionism in 1 John. No specific attention is paid to contemporary application. Errors are few; I just noted that B.D. Ehrman has become B.E. Ehrman.