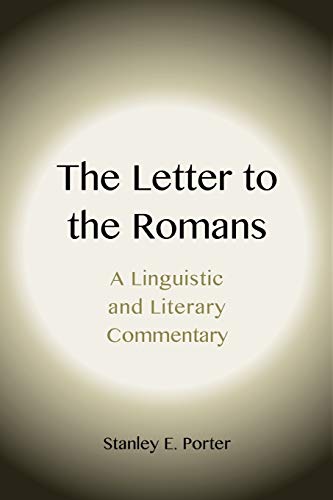 The Letter to the Romans: A Linguistic and Literary Commentary

Stan Porter needs no introduction since he is one of the most prolific and fascinating NT scholars of our day. Porter takes a distinct approach in this commentary by adopting a linguistic and literary approach. The linguistic approach adopted is Systemic Functional Linguistics. Porter explains this approach in some detail in the introduction, though it is rather difficult to understand for ordinary readers since many technical terms are used to describe the approach. In the commentary proper, on the other hand, the use of such terminology is kept to a minimum so that the reader who is unfamiliar with Systemic Functional Linguistics can follow what Porter is saying. But there is also a liability to this procedure since the basis for some of Porter’s claims is not explicated in the commentary. Those who are interested in such will need to await a more detailed and formal approach.

Apart from the emphasis on linguistics, Porter’s introduction is quite typical and represents what is found in other standard commentaries. Porter canvases the various purposes of the letter and argues that a number of reasons may account for the letter, but he particularly emphasizes the theological cast of the letter and its status as real letter written to believers in Rome. The letter is divided into a five-part structure: 1) opening (1:1–7); 2) thanksgiving (1:8–15); 3) body (1:16–11:36); 4) parenesis (12:1–15:33); and 5) closing (16:1–27). In terms of the character of the letter, Porter, like other scholars, sees a dialogical element, and hence emphasizes the diatribe. Still, the focus on the diatribe in some texts (like Rom 3:25–26) is quite distinctive. Porter sees the climax of the letter in chapter 5 where the reconciliation of God with human beings is celebrated. Justification cannot be the climax, according to Porter, since it denotes one’s legal status before God and lacks the warmth and relational character present in reconciliation.

The bulk of the commentary consists of a close reading of the letter. Porter wants the reader to hear Paul and to pay careful attention to the text itself. It is useful to indicate some of the judgments made by Porter as a commentator. Porter spies a slap against the empire in the opening which declares that the gospel centers on Jesus Christ. He says that the body of the letter is not anti-imperial, though he sees an anti-imperial theme in believers being identified as God’s sons in Romans 8. Despite Porter’s claims, a critique of the empire seems unlikely, especially since Paul says nothing negative about the government in Rom 13:1–7. Porter agrees with most that the theme of the letter is in 1:16–17, and he understands God’s righteousness forensically. On the other hand, Porter is not shy about traveling his own path. Romans 2:1 is not directed against Jews only but is directed to moral Jews and Gentiles. The obedience in Romans 2 is not hypothetical but represents the change of life of those who have repented of their sins. The sphere of the law (3:19) cannot be limited to the Jews since the word law in Romans is not limited to the Torah (so also according to Porter in 3:21 and 7:7) but may refer to any law written or unwritten. The superior textual reading in 5:1 is not the indicative: “we have peace with God,” but the subjunctive: “we should enjoy peace with God.”

Porter also adopts readings that are endorsed by many scholars, especially evangelicals. Romans 3:25 has the meaning of propitiation, says Porter, no matter how unpalatable that is to moderns, though he dissents from the notion that it refers to the mercy seat. We are not surprised to learn as well that he supports “faith in Jesus Christ” since Porter has contributed to this debate previously. The contested words in Rom. 5:12 ἐφ᾿ ᾧ, where the impact of Adam’s sin is discussed, should be translated “because.”

We also get Porter’s take on matters where there is significant debate. For instance, baptism, which is referenced in Romans 6, was by immersion according to the author. Disagreement on Romans 7 will continue until the parousia, and Porter says Paul describes his own experience as a believer. The role of the law in Rom 10:4 is also intensely debated, and Porter doesn’t go into details but argues that the law has come to an end relative to righteousness. Porter thinks Paul is ironic in 11:15 so that life from the dead means Israel would accept the resurrection of Jesus or that it symbolizes Israel returning to God as the promised people. The salvation of all Israel (11:26) includes both Jews and Gentiles and thus the redemption of the church is promised.

A few other judgments of Porter are worth noting. Calling Jesus Lord in 10:13 is equivalent to identifying him as Yahweh. Porter’s expertise in grammar made us wonder how he will handle the participles and infinitives in Rom 12:9–21. He sees them as imperatival, though we are not given much of an explanation as to why he makes this judgment. When it comes to the exhortation to obey ruling authorities (13:1–7), Porter says that the call to submit is limited to morally righteous authorities. In Romans 14 the weak are primarily Jewish, while the strong are mainly Gentile, and the dispute is over Jewish food laws. It is not a problem that Romans 16 addresses those Paul knew in Rome since many traveled in the Roman world. He also argues in chapter 16 that Phoebe was a leader of the church in Cenchreae and that Junia was a full-fledged apostle.

Since this is a literary and linguistic commentary, many theological issues are not probed or discussed in much detail. If readers are looking for theological discussion on matters like the new perspective, original sin, or election, they are apt to be disappointed. Still, Porter makes it clear at the outset that such is not the aim of the commentary. He offers a close reading of the text. The interpretive decisions cataloged above are obviously disputed and there is not space in this review to adjudicate matters. Given the brevity of the commentary, Porter often defends his interpretation without much argumentation. But if he delved into matters more deeply the commentary would be much longer. In closing, we can be grateful for the reading of Romans provided by a seasoned scholar.