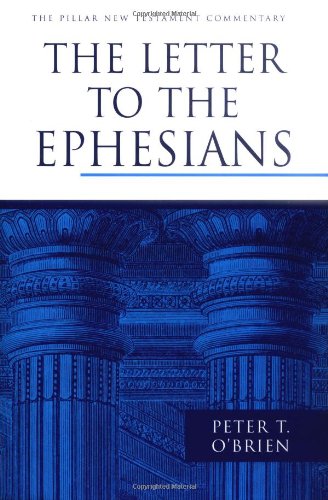 The Letter to the Ephesians

On a topic that is already so heavily written on that a book-length bibliography can be published, to attempt some categorisation of the literature on it, the question might be put, ‘what is the value of another commentary on the book of Ephesians?’ In the case of Peter O’Brien’s recent work there is much value, especially for evangelicals. From the start, O’Brien’s commentary proves itself a valuable tool both for scholars and those seriously interested in working through the issues Ephesians poses. With a substantial select bibliography of over 360 of the most important and helpful works on the subject, to an extensive set of indexes (Subject, Author, Scripture, Extrabiblical), O’Brien’s commentary is organised and structured for maximum utility by serious students of the text. However, O’Brien’s entire approach to the interpretation and exegesis of the book makes it accessible to those who do not feel the need to interact with the academic discussions behind the text as well. O’Brien’s sympathetic posture allows for a genuine ‘spirituality of the text’ to be grasped, without alienating those more interested in the more refined aspects and arguments posed by biblical criticism. This makes O’Brien’s commentary an especially useful tool both for pastors who are concerned to delve into the important theological and pastoral themes raised in Ephesians, as well as for theologians who are looking for a commentary that is more sympathetic to evangelical perspectives.

Beginning with the thorny question of authorship, O’Brien commits the first half of his introduction (over 40 pages) to an evaluation of the arguments that have been posed by scholars on both sides of the debate as to whether or not Paul is the author of the book. O’Brien addresses each of the important arguments made against Pauline authorship, such as the impersonal character of Ephesians, the author’s language and style, the literary relationship between Ephesians and Colossians the theological emphases of Ephesians, the picture of Paul presented in the book, and relates them to the whole question of authorship and pseudonymity in the NT (1–46). While he isn’t always able to offer a positive alternative to the views he is critiquing, O’Brien engages in the much neglected task of challenging the consensus, and reminds evangelicals and liberals alike of the dangers inherent in simply passing over the difficult issues involved in the question of Pauline authorship for a pat answer. By challenging the more liberal suggestion that a non-Pauline authorship is the ‘assured result of New Testament criticism’, O’Brien brings the discussion back into open debate with intelligent and critical evaluations of the most important questions posed in this debate (46).

O’Brien next addresses the other debated issue regarding Ephesians: the destination of the letter. Settling on the consensus opinion that Ephesians was likely not destined to Ephesus in particular, but was a circular letter to the various churches in Asia Minor, O’Brien sides with those who see the key phrase, ‘in Ephesus’, which is missing in our most reliable documents, as decisive for determining this question. By viewing Ephesians as a circular letter destined to the churches in Asia Minor, O’Brien, with others, is able to explain the ‘impersonal character’ of the letter. In doing so, he suggests a provenance for the letter around AD 61–62 from the apostle Paul during his imprisonment in Rome, very near the end of the apostle’s career. Perhaps this explains the grand and far-reaching visions of the letter to the Ephesians, and the cosmic scale of its central themes.

The central theme of the letter, O’Brien proposes, is in fact cosmic reconciliation and unity in Christ. While the letter is divided into two halves, one more doctrinal (chs 1–3) and the latter more ethical (chs 4–6). It is held together in 4:1–6 by the exhortation to unity, which is the underlying theme that consistently resurfaces throughout the letter (64). This is not only a unity established between God and man, but one that finds its most immediate expression in the reconciliation of Jews and Gentiles (2:11–22). Central to this work of reconciliation that makes unity conceivable, is the death and sacrifice of Christ on the cross. This is a unity and peace that is only possible through the work of Christ, and so is not dependent on human effort. However, this unity is created by the Spirit, and spirit-filled believers are exhorted to maintain that unity through their actions and behaviours (4:1–4).

O’Brien’s exegesis of the text of the letter is critical, cautious and more generally conservative. Over the next 400 pages he deals specifically with the themes and sub-themes that this rich text offer to those who probe into its intricate arguments and who are willing to work through the symbols and metaphors Paul uses to try and express the ‘unsearchable riches in Christ’. However, those familiar with O’Brien’s lucid style will be happy to know that he maintains this through even the most meticulous sections making the commentary both readable and enlightening throughout. O’Brien divides the letter theologically into two sections which he classifies as ‘the New Humanity a Divine Creation’, encompassing chapters 1:3–3:21, and ‘The New Humanity in Earthly Life’ encompassing chapters 4:1–6:20. In the first half he addresses the important theological themes, such as the supremacy of Christ, the role of the universal Church in God’s mystery, the reconciliation of Jews and Gentiles, and the individual transformation of believer’s lives. These grand ideas are put in the context of God’s plan to ‘gather all things up in Christ’ (1:9–10). This ‘summing up’ along with the underlying concept of cosmic reconciliation and unity are the substance of God’s great and mysterious plan to gather all things together in Christ, and the very message Paul himself has been entrusted to reveal and proclaim to the Gentiles (3:1–13). In the second half, he discusses the functional and ethical out-workings of this great and mysterious work of cosmic reconciliation in Christ. Believers are exhorted to maintain this unity not in rational beliefs alone, but through practical attitudes and behaviours that are conditioned by a spirit-controlled life, characterised by ‘putting on Christ’. Chapters 4–6 explain Paul’s theological insights in practical admonitions and in stirring exhortations to ‘put on the armour of Christ’ (6:10–20).

Peter O’Brien’s five-year commitment to this letter and its interpretation has resulted in an authoritative study and evaluation of a letter that has in recent times been marginalised and misused. By doing the difficult work of aching through the vast literature on the subject, and by engaging thoughtfully and spiritually with the themes of the letter, Peter O’Brien has provided scholars and serious students of the Bible an up-to-date and comprehensive assessment of one of Paul’s most important and influential letters.