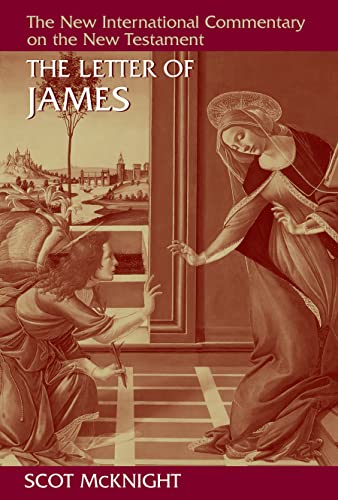 The Letter of James

Scot McKnight’s commentary on the letter of James is a greatly welcome addition to the field. This commentary replaces Adamson’s 1976 NICNT commentary and more than doubles its length, but despite that it does not make for dry or pedantic reading. McKnight writes in an engaging, humorous, and thoughtful manner, drawing the reader into the various issues he approaches and bringing clarity to the various debates on introductory and interpretive issues.

The commentary follows standard format, with an introduction to the background issue of authorship in all its complexity for this epistle, a helpful guide on how to read James, and introductions to the (controversial) question of central themes in the epistle and how the epistle is structured. Perhaps less interested in questions of audience and remaining relatively non-committal on date (although opting for the 50s), McKnight’s introduction seems more focused on helping the reader to read James themselves, understanding the character of the author and the literary context of the letter, so that the voice of the epistle can emerge in the canon. In this sense, McKnight follows through his introductory admonitions to “read James!” and then “read James in light of James!” (p. 1), first by helping the character and context of the author, as well as the themes and potential structures of the epistle, to emerge such that one approaches the text with a great deal of respect before even beginning.

As the commentary progresses, each pericope is given a brief introduction, a translation that usefully compares NRSV and TNIV interpretations, and then a detailed verse-by-verse discussion. As is normal for the series, the Greek is in footnotes, so as not to interrupt the flow of the text, and the transliteration and use of vocabulary is seamless, making this a useful text for those who know Greek and Hebrew as well as for those who do not. Likewise, detailed grammatical conversations are kept to a minimum and more often appear in the footnotes with the Greek, again supporting the notion of a comprehensive commentary that does not alienate various levels of readers. Where grammatical discussions are significant, he does include them in the text, such as the implications of the present tense in 2:9 as not simply “something currently going on” but, based on aspectual theory, actions “depicted as incomplete and depicted as going on before our eyes” (p. 209; see 71n12). McKnight balances well between technical discussions and keeping the reader aware of where they are in the theology and argument of the larger text.

McKnight does take some less established positions, such as seeing all of 1:2–27 as “a single unit addressed to a specific audience: the poor messianic community that is being oppressed by persons in positions of power” (p. 68), finding an economic twist to all the trials and temptations described in this chapter. This leads him, for instance, in 1:2–4 to see these “trials of any kind” as more particularly “socio-economic suffering” (p. 76). Likewise, he holds that “the entirety of 3:1–4:12 is addressed to teachers in the messianic community” (p. 267), which I would argue has some implications for how this is read in community. While he remains consistent, he also shows other prominent interpretations and, where he differs significantly, describes how they play out in the text. As such, the commentary does not swing into any isolated positions, remaining consistent to McKnight’s outline of the text even while fairly presenting the various interpretations. His use and awareness of the current scholarship is sound.

One of the greatest strengths is McKnight’s masterful use of external literature to help unveil the meaning in the text. With every verse there are at least parenthetical references to other NT texts with common vocabulary or teaching (e.g., his discussion of “wickedness” in 3:16, p. 309), but more often he gives citations to Wisdom, Deuteronomy, Proverbs, Sirach, the prophets, the Gospels, and other biblical texts, as well as to Greek and other early Jewish literature. In this, the commentary becomes a treasure-trove resource for those who wish to give the text a literary context and understand where James is both like and unlike other literature. Likewise, McKnight’s literary-theological reading of James allows him to see texts such as 2:14–26 as flowing “naturally from 2:1–13” (p. 223). His reading of James as a coherent and theological document may be one of the greatest contributions of this commentary. Even where one may disagree with his interpretation, McKnight demonstrates deft awareness of the Jewish-Christian world from which the epistle originated, the relevant literature (then and now), and a respect for the text that is refreshing. In my perspective, this greatly expanded NICNT commentary stands as a prize addition to the field as a widely useable resource.