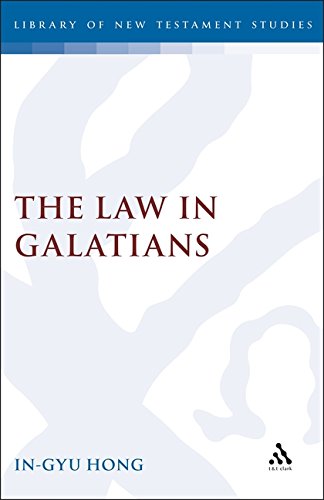 The Law in Galatians (JSNTS 81)

In light of the massive amount of literature which has been produced in recent years on the subject of Paul and the law, one might wonder why still yet another monograph has been written in this area. In the introduction to this volume, which originated as a doctoral dissertation presented to the theology faculty at the University of Stellenbosch in South Africa, In-Gyu Hong addresses this question. After surveying some of the most influential approaches to this topic which are presently on offer, e.g. the positions advocated by H. Hübner, E.P. Sanders, H. Räisänen, J.D.G. Dunn and S. Westerholm, Hong contends that none of them is satisfactory. Moreover, he maintains that in order to understand Paul and the law aright one must consider carefully Paul’s remarks on the subject in each individual letter. Hong selects Galatians, the epistle which he believes contains Paul’s earliest thoughts on the law, because he is convinced that ‘no one has thus far made a serious attempt to penetrate deeply Paul’s understanding of the law as expressed in this letter’ (p. 15). (I wonder how the above-mentioned scholars, along with countless others who have attempted to decipher the function of the law in this epistle, would respond to this loosely worded opinion!) Although this statement is certainly a gross exaggeration, it does illuminate the author’s rationale in pursuing such a project.

The monograph is divided into two parts. The first section is given over to preliminary considerations. Chapter 1, a discourse and rhetorical analysis of the structure of Galatians, constitutes the lion’s share of the first part, or for that matter of the entire book. Hong devotes some 55 pages (roughly a quarter of the volume) to this tedious analysis. He painstakingly evaluates the letter’s structure on both a micro and macro level. His inquiry leads him to conclude that Galatians is a deliberative letter which may be broadly outlined as follows: prescript (1:1–5); proposition (1:6–10); narration (1:11–2:21); argument (3:1–4:31); exhortation (5:1–6:10); and postscript (6:11–18). In our opinion, Hong’s discourse analysis of the epistle is the most significant and original contribution of this volume, even though he does do a poor job of integrating the results of his analysis into the rest of his thesis. In the second chapter Hong argues that Paul’s argument in Galatians is grounded in ‘his understanding of the cross of Christ as the event of the eschatological redemption’ (p. 95). According to the author, such an understanding was initially gained by Paul on the Damascus road. We learn in Chapter 3 that Hong perceives Paul’s Galatian opponents to be ‘Jewish Christians connected with the right-wing party in the Jerusalem Church’ who were encouraging the Galatian Christians to ‘receive circumcision and obey the law as the Jews do’ (p. 120).

The second part of the book seeks to discern Paul’s view of the law in Galatians. After a cursory consideration in Chapter 4 of the meaning of νόμο̯ξ (‘law’) in Galatians, Hong sets forth in the three chapters that follow what he believes to be the three functions of the law in Galatians. He suggests that Paul understands the law to operate on three different levels: (1) as an obligation of the Sinai covenant (ch. 5); (2) as an enslaving power (ch. 6); and (3) as an expression of love (ch. 7). Hong contends that in Paul’s perspective the first two functions of the law were made obsolete as a result of Christ’s redemptive work. But the love command which fulfils the whole law remains operative in the life of the believer. By way of conclusion the author summarizes the results of his study and offers three implications of his work for the present debate on Paul and the law. Hong maintains that in Galatians Paul does not misrepresent the law in Judaism, that his view of the law is not wholly negative, and that his treatment of the law is not inconsistent. The author leaves the broader application of these observations to the reader.

Although Hong displays a high standard of scholarship throughout much of this volume and has admirably waded through a flood of secondary literature on the subject, he seems to have overestimated the uniqueness of his views on Paul and the law. The majority of his conclusions are conventional and are similar to, if not a mere rehearsal of, others’ views on the subject. There is nothing inherently wrong with such a study, but given the introduction to the study one expected the moon! On the whole Hong argues his position well; however, his arguments against others’ opinions are often quite thin and not as conclusive as he appears to think (see his inadequate rebuttal of Räisänen’s view of the law in Paul on pp. 195–197). That there has been so much written on Paul and the law is due largely to the fact that it is such a complex issue, as the author rightly acknowledges. Because it is such a knotty problem, Paul and the law will continue to be a ‘hot-button’ in NT studies. This book is instructive and a welcomed contribution to the discussion, and among its other strengths, it serves as a helpful summary of the current state of the debate.