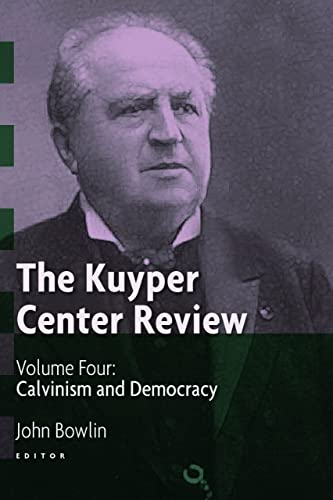 In 2012 a group of scholars gathered at Princeton Theological Seminary for a conference titled, “Calvinism and Democracy.” The purpose of this conference was to reflect upon the neo-Calvinist legacy, to explore its theological roots, and to assess in what ways this tradition might provide resources for democratic criticism and renewal. The Kuyper Center Review (Volume Four): Calvinism and Democracy represents the published proceedings of this conference.

Although this collection covers a wide range of topics, there are two themes that tie all eleven essays together: (1) the notion that democracy today is facing a crisis. and (2) the fact that neo-Calvinism has always had a complicated relationship with democracy. Despite these unifying themes this variegated compilation of essays lacks coherence. Since there does not seem to be a strong organizing principle behind their arrangement, for the sake of the review I will divide them into three categories: historical essays on Abraham Kuyper, prescriptive essays based upon Kuyper’s theology, and essays examining other theologians.

The historical essays include contributions by seasoned Kuyper scholars George Harinck and Harry Van Dyke, as well as one by Clifford Anderson. First, Harinck explores the reasons behind neo-Calvinism’s complicated relationship with democracy. Next, Anderson makes perceptive observations regarding the logic behind liberalism and democracy. He argues that the Kuyperian notion of divine sovereignty rather than popular sovereignty allows us to hold these two ideologies together. Finally, Van Dyke makes two contributions: first, he translates the correspondence between Willem Groen van Prinster and Kuyper regarding Kuyper’s election to parliament; second, he addresses the nature of Kuyper’s democracy and his role as an emancipator of the kleine luyden (the ordinary people without influence in the land) in the Netherlands.

However, this collection does not limit itself to looking back at neo-Calvinism’s historical and theological roots. In the group of prescriptive essays Jeffrey Stout, Michael Bräutigam, and Michael DeMoor look to Kuyper as a resource for democratic criticism and renewal. Stout turns to Kuyper’s The Social Problem and the Christian Religion in order to prescribe a course of action for addressing the problems of poverty, domination, and exploitation. Bräutigam makes the case that Kuyper’s distinction between the church as an institution and as an organism “provides a significant motif for Christian political involvement” (p. 67). Finally, DeMoor calls upon other political theologians to develop a specifically neo-Calvinist conception of deliberative democracy rooted in the God’s sovereignty.

The final category of essays focuses on theologians other than Kuyper. David Little argues that Calvinist theology has made “a significant, if sometimes very ambivalent contribution” to the rise of modern constitutionalism (p. 24). He makes this argument by turning to the political theology of John Calvin, John Cotton, and Roger Williams. In “Distinctively Common,” Clay Cooke utilizes the thought of Herman Bavinck to develop ways to hold on to Christian peculiarity and the common good in the public square. James Eglinton also looks to Bavinck’s theology and shows how Bavinck could support the democratic development of the Netherlands while insisting that churches ought to be organized around principles that differ from democracy. Finally, Brant Himes shows how Kuyper’s and Dietrich Bonhoeffer’s Christology and doctrines of creation enable them live our their convictions that Christianity demands “public discipleship.”

Calvinism and Democracy is a superb collection that will serve to stimulate further theological and political reflection upon its subject matter. Many of these essays provide avenues for further scholarly research. For instance Clay Cooke suggests that Bavinck sees cruciformity as a political virtue. One might want to further investigate what it looks like in practice to engage in politics in a cruciform manner. Michael Bräutigam’s chapter, “The Christian as homo politicus,” explains how Kuyper used new forms of media to stimulate political action among the kleine luyden. It would certainly be a worthwhile project to see how new forms of social media, including twitter and blogs, could be used to continue Kuyper’s legacy of stimulating political action within the church. In addition to stimulating further research, this collection will also serve ministers who are attempting to form their own theology of political action within the church. Clay Cooke’s and Michael Bräutigam’s essays will be especially helpful. Both move beyond mere theory and develop practical courses of action for the church.

Despite possessing these strengths, this book certainly has its flaws. One weakness of the collection as a whole is its lack of organization. There is no apparent logic as to how the individual chapters were organized within the book. Several essays also could have been improved. For instance, DeMoor’s essay calls for someone else to develop a neo-Calvinist model of deliberative democracy, but it would have been stronger if he had developed a model himself. Little’s essay also has an odd flaw; although he addresses John Cotton’s and Roger Williams’s political theories he never specifically addresses their distinctive Calvinist theology. This surely undermines his thesis. Yet despite these drawbacks Calvinism and Democracy is a valuable collection that will stimulate further scholarly work and encourage ministers to develop their own theology of political action.