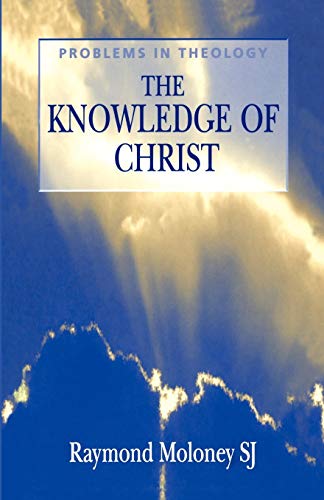 The Knowledge of Christ (Problems in Theology)

There is an interesting question that underlies the current popularity in wearing the wristlet with the initials WWJD (What would Jesus do?). It is this: how can we be certain of Jesus’ mind on any and all matters? And behind this lies the question being addressed in Raymond Moloney’s book, The Knowledge of Christ. It concerns our understanding of Jesus’ own self-consciousness and self-knowledge. As Mascall correctly points out in relation to this very subject, ‘It is both ridiculous and irreverent to ask what it must have been like to be God incarnate’.

It must be stated at the outset that this little book is very much one that dares address this question, and does so from a Roman Catholic tradition. As such, it makes little sense to anyone with scant knowledge of this tradition and its theology. It is clearly a book for theologically aware readers. This may be a negative for some, but given the subject matter of the book, it makes sense that this is being addressed from within the Roman tradition. Put bluntly, it is only from within this robust tradition that the subject of Jesus Christ’s self-consciousness, as one who is both fully man and fully God, can be discussed. It has an aristocratic history and yet is also given serious reflection given the problems modern psychology raise in relation to any traditional two-nature Christology.

The author makes a difficult subject relatively readable. What he does is to summarise three key Roman Catholic thinkers in order to wrestle with the issue—and correctly so, for as he admits, the NT itself does not fully answer the question on its own. Yet, if we are to be able to answer the question of what Jesus would do in any given situation, we also need to have confidence in our ability to know his mind on these matters: something more easily said than done. Enter the theologians, Rahner, von Balthasar and Lonergan to whom Moloney turns in order to address the problem. In essence they locate the answer in terms of Jesus’ relationship with God his Father. From this relationship came his self-understanding both as the man Jesus of Nazareth as well as the Word become flesh. Consequently, our Lord’s self-knowledge is to be understood within the matrix of his own vision of God and his understanding of Son.

I like this: no quick fix or instant knowledge. Thus, as with our Lord, so with ourselves—our knowledge of self and of Christ is carved out of a prior relationship with God who is our Father.

What was less satisfactory, was the degree to which Moloney’s book completely failed to address the role of the Spirit in the formation of Christ’s self-knowledge. In so doing, he perpetuates the Achilles’ heel of traditional, Chalcedonian, two-nature Christologies: the divinity of the Son fulfils the functions of the Spirit. In essence, Jesus of Nazareth has no need of the Spirit. In so doing, the link between the risen Christ in his exalted humanity and my own struggling discipleship is broken. To this extent, Moloney replaces one problem in theology for another.