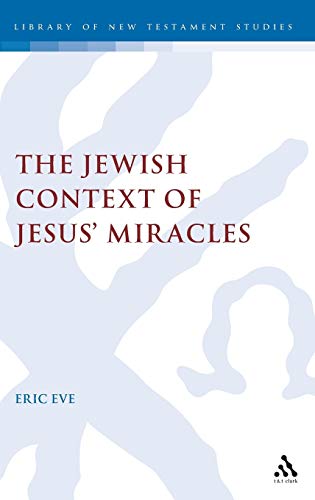 While similar phenomena and parallels in Jewish literature have been noted, critical scholars have more often turned to Greco-Roman sources in order to understand and/or explain the NT reports of the miracles of Jesus and his apostolic followers (e.g. the collection of ‘Miracle Stories in the Ancient World’ in a recent text-book contains two Jewish miracle stories and six Greco-Roman examples; cf. D. Burkett, An Introduction to the New Testament and the Origins of Christianity; Cambridge: CUP, 2002, 539–48). However, recent scholarship has increasingly noticed and paid attention to the roots of the NT in the OT and in Early Judaism and started to look there for analogies and possible similarities. The present exhaustive volume follows this welcome trend.

After a brief introduction Eve examines miracles in Josephus and in Philo, examining the concept and language of the miraculous, the distribution of miracles in their writings and the function of the miraculous. Further chapters address miracle and wisdom (Wisdom of Solomon, Ben Sira), miracles in Pseudo-Philo, the Enochic literature, in selected Qumran texts, in romantic literature (Tobit, Artapanus) and in other Second Temple literature.

Chapters 10–13 address those Jews who performed miracles (272–376), starting with charismatic holy men like Honi the Circle-Drawer and Hanina ben Dosa. Chapter eleven (296–325) examines the accounts and characteristics of the sign prophets who appeared in first-century ce Palestine and are mentioned by Josephus and in the NT (Acts 5:36; 21:38; Mark 13:22; Matt. 24:26). On Jewish exorcists Eve studies the NT evidence (Jesus and Beelzebul, the so-called Strange Exorcist, Mark 9:38f, and the sons of Sceva in Acts 19:13–20), Jewish evidence (Josephus, Qumran, Rabbinic) and later non-Jewish evidence (church fathers). Eve concludes:

Such evidence as there is suffices to show that Jesus was not unique in his cultural milieu in casting out evil spirits. He may nonetheless have been remarkably unusual, not least in his claim to be doing so by the spirit of God. The impression sometimes given in modern scholarly literature that Jewish exorcists were two a penny is apparently not supported by the literary evidence (349).

A final chapter is devoted to Jewish healers, magicians and to spirits (various aspects of spirit possession). A detailed bibliography and indices of references (including many NT references, which allow use of this volume as a reference tool) and authors round off this well-produced volume.

Eve concludes that while most Second Temple Jews were not preoccupied with miracles, they did believe in them. However, it was the great signs and wonders of the past, specially those associated with the exodus and conquest, which received most attention. Together with other miracles of national deliverance, they provided the basis for various hopes for signs and wonders in the future. The miracles of Jesus differed remarkably from this mainstream of Jewish expectation about signs and wonders. Yet Eve sees three links. First: the healings of Jesus resemble those attributed to the great miracle-working prophets Elijah and Elisha. Second: there are ‘occasional indications in Jewish literature of soteriological or even eschatological expectations of health, healing and the defeat of demonic powers’ (377). Third: some sea and feeding miracles of Jesus recall at least superficially the exodus events and thus link Jesus securely with the great signs and wonders of the past, and with Moses ‘who is both the Jewish figure through whom the greatest miracles were worked, and the figure with whom the great events of national deliverance and foundation were associated’ (377).

While this is primarily a study of the background of the NT which has been done well and it does shed helpful light on the NT itself in showing ‘how both the Gospel presentations of Jesus’ miracles and the miracles of the historical Jesus would appear distinctive within the Judaism of his time while making sense in a Jewish context’ (386). The volume is of interest to all students of the historical Jesus and his miraculous works, of the Gospels and of Acts and of Second Temple Judaism in general.