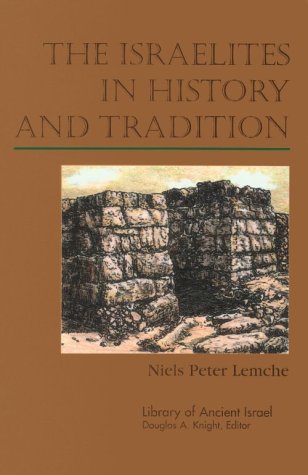 The Israelites in History and Tradition

This book asks whether the Israel of the OT is a reflection of a real historical society, or a negative literary contrast to the ‘new Israel’, understood by the author as an ideal society to be established in the near future.

The book opens with a useful discussion on the concepts of national state and ethnicity, and demonstrates how reconstructions of Israel’s history have often been governed by concepts derived from modern western civilisation. Lemche then highlights the lateness of the OT text as a problem for using it to reconstruct Israel’s history in the Iron Age. He does not preclude the possibility that it contains historical reliable information. But he claims, significantly, that in every single case it has to prove its status as a historical reliable source. The basis for his investigation into the early history of Israel is therefore the contemporary epigraphical and archaeological evidence.

So Lemche next analyses various references to Israel: the Merneptah stele (Egypt, late 13th century), the Tel-Dan stele (Palestine, late 9th or—as preferred by Lemche—early 8th century), the Mesha stele (Transjordan, mid 9th century), and the annals of Shalmaneser III (9th century). He concludes: ‘there is absolutely no reference that can be interpreted as a national or religious name of a special group of people living in these quarters and having some of the particular traits attached to them by the Old Testament tradition’ (63) … ‘There is nothing that may look like a national consciousness before the Assyrian invasion and conquest of Israel (Samaria) in 722’ (85n).

Turning to the biblical evidence. Lemche revives Noth’s amphictyony hypothesis as a literary device. He attributes the idea of the twelve tribes surrounding their central shrine to the literary imagination of late Persian and Hellenistic Jewish society, which saw itself as the heir of ancient Israel. The writers re-created the past as a tragic drama of Israel, constructing their origin myth as a programme for taking over a country in spite of its indigenous inhabitants.

Taking his cue from Davies, Lemche concludes with a few samples of the image of ancient Israel created by critical scholars (Wellhausen, Noth, Bright, Albertz). He argues that they are all more or less guided by the OT’s chronological and terminological framework. This procedure has to be abandoned, since the historian of Israel must use the primary sources alone, not the secondary sources of the OT.

Lemche acknowledges in theory that ‘a later source [can be] more reliable than a contemporary one’ (24). But in practice he refuses to allow the OT to link the Israels of Merneptah and Shalmaneser III, since such a procedure represents a premature blending of primary and secondary sources. However, his arguments are both unnecessary and circular. First, Lemche’s interpretation of the epigraphical and archaeological material is tendentious. To use a particular interpretation of the sparse primary evidence to dismiss a possibly reliable secondary source is circular argumentation. Secondly, the OT’s sophisticated literary devices and complex composition history do not necessarily detract from its historical reliability. Unless there are other reasons for doubting Its historical reliability, it should be allowed (with due attention to its religious, political or other biases) to testify to what happened to Israel in the Iron Age. Since other interpretations of the primary epigraphical and archaeological material are possible, which do not contradict the biblical narratives, a reconstruction which takes into account both primary and secondary evidence must be preferred to Lemche’s distinction between the ‘historical’ Israel of the Iron Age and the ‘literary’ Israel of the Bible.