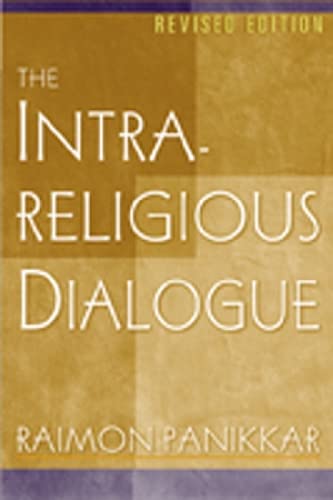 Dialogue is an ‘in’ word these days—praised by those who see it as the only way forward in a pluralistic age, dismissed out of hand by others who discern in the activity no more than the devil’s compromise. Raimundo Panikkar does us all a good service by describing more lucidly than most the essence of dialogue at its extreme.

Consider first the title of his collection of essays. Professor Panikkar, who has spent a lifetime in religious dialogue, writing twenty-six books in the process, is concerned to demonstrate that inter-religious dialogue is no real dialogue unless accompanied by intra-religious dialogue. By the latter he means a dialogue within one’s self, an encounter in the depths of one’s personal religiousness, in which the challenge of conversion to the other religions is genuinely accepted.

According to Panikkar, one enters dialogue ‘knowing full well he may in fact have to lose a particular belief or particular religion altogether. He trusts in truth. He enters unarmed and ready to be converted himself. He may lose his life—he may also be born again.’ In short, dialogue must be a truly religious encounter.

Not many evangelicals would be willing to follow Panikkar down this path wherein he insists on a ‘dekerygmatization of faith’. (To be honest, I wouldn’t, and I don’t know of a single one of my peers who would be willing to do so either.) Such a plunge is beyond our psychological capacities. Why is this? Undoubtedly, it reflects our deeply felt convictions as to the exclusiveness of the gospel’s claims, on the one hand (‘there is salvation in no one else’, Acts 4:12), and its inclusiveness on the other hand. By the latter I refer to the common idea that the best in all religions is summed up in Christ. Both attitudes are exemplified in Justin Martyr’s Dialogue with Trypho (The Ante-Nicene Fathers, Vol. 1). Both are regarded by Panikkar as hindrances to genuine dialogue.

Does this mean that Panikkar’s latest offering has nothing of value to evangelicals? Quite the contrary. In many respects the book is a gem. After all, Panikkar was born and bred in two major religious traditions, Roman Catholic and Hindu. He has lived what he argues. The book is filled with valuable insights, as in his distinction between faith and belief (chapter 1) and in his description of ‘the rules of the game’ (chapter 2). From the latter he draws some practical lessons, perhaps the most important being the need for equal preparation for dialogue on the part of both partners.

Similarly his critique of phenomenological ‘epoche’ in religious encounter (chapter 3) will be helpful to evangelicals. (The term refers to the supposed ‘bracketing’ or suspension of one’s faith, in an attempt at objectivity, as a necessary condition to dialogue.) Chapter 4 uncovers Panikkar’s basic presuppositions. This too is helpful in understanding where both he and we are coming from. His final chapter, analysing Buddhist and Christian responses to the human predicament is enlightening. It is a discussion of the doctrines of sunyata (emptiness) and pleroma (fullness).

These essays will stimulate the thoughtful reader to examine Panikkar’s basic assumption that there exists in Man ‘a fundamental religiousness, a constitutive religious dimension’, a root ‘that grows, flowers and gives fruit in the most multiform way’. Granted that this is so, what is its significance? Is it an expression of the depravity of Man, therefore untrustworthy, and therefore calling for an authoritative proclamation of salvation? Or is it the basis for faith that transcends the particularities of any religious system and, therefore, calls for a leap of faith into genuine dialogue as defined by Panikkar?

One final thought. Without doubt our evangelical communities in Buddhist, Hindu and Muslim lands need a deeper understanding of the religious life of their respective societies. Just as clearly such an understanding cannot be acquired by a kind of scientific analysis from the outside. Panikkar is bold to insist on the truly religious (faith commitment) dimension of dialogue. Are there evangelicals anywhere brave enough to attempt this? Would we accept them and their findings if they did so attempt? Or should we rely entirely on converts to Christianity for our insights into the higher religions of man?

God and family: from sociology to covenant theology

by A. Van Seters

The Reverse Order of Ezra/Nehemiah Reconsidered

The sword of the Spirit: the meaning of inspiration

The biblical basis of hope

by D. R. Denton
VIEW ALL VIEW ALL

Temples and Temple Service in Ancient Israel: an Enquiry into the Character of Cult Phenomena and the Historical Setting of the Priestley School

Reviewed by C. Peter White
Ethics and Pastoralia
VIEW ALL VIEW ALL