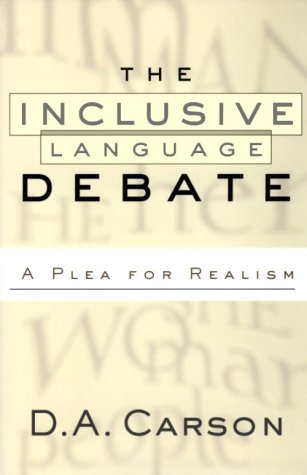 The Inclusive Language Debate: A Plea for Realism

This book begins and ends with a consideration of a phenomenon, by no means an exclusively modern phenomenon, which Carson calls ‘Bible rage’—the sort of furious and unreasonable reaction against novelty in Bible translation that leads Christian people to mutilate copies of Scripture with a power drill or hound teachers from seminaries. The current crisis erupted when World magazine, an American publication, spotlighted in a somewhat sensationalist fashion the intention of Zondervan to publish an inclusive language version of the NIV (NIVI) in the US. After a few months of intense and very public debate Zondervan backed down.

Opposition to the NIVI came mostly from churches, institutions and scholars who have adopted a strongly traditionalist or ‘complementarian’ stance on the broader issue of the relative status of men and women. Inclusive language translations were denounced as a capitulation to an insidious feminist agenda. What makes this book especially valuable, therefore, is that it is a defence of the principle of inclusive language translation from within the complementarian camp. Carson’s overriding concern is to show that it is neither biblical anthropology nor ecclesiology that are at stake here: the problem is rather one of the theory and practice of translation, and much confusion has arisen, in his view, because the arguments against inclusive language translation have been devised by people with good intentions but a poor grasp of linguistics and the practicalities of translation.

The theoretical core of the book is a discussion of the technical difficulties involved in the process of translation. Because languages differ widely in terms of structure, vocabulary and cultural presuppositions, it is never possible to convert a thought from one language to another without some loss or distortion of meaning. Translation is treason’, it is always a compromise. This is true not least with regard to grammatical gender. Carson treats the reader to a fascinating perambulation through the gender systems of some of the world’s more obscure languages in order to demonstrate both the largely arbitrary nature of linguistic gender and the impossibility of fully replicating the nuances of one system in another.

This then provides the basis for a discussion of the principles for gender-inclusive translation proposed by the leading protagonists in the debate: on the one hand, the Committee on Bible Translation (CBT), which is responsible for the NFV and NIVI; and on the other, the ad hoc group of journalists, Christian leaders and scholars who wrote what have become known as the Colorado Springs Guidelines. Chapters on passages of exegetical and doctrinal importance and on the slippery and subjective question of whether the English language is really in the process of abandoning generic masculine forms neatly round out the discussion. Carson is vigorous but even-handed in his assessment and quick to acknowledge the legitimacy of some of the criticisms levelled against the CBT. In the end, however, he remains convinced both for linguistic and pastoral reasons that the option of an inclusive language translation is highly desirable. His concluding admonitions to World magazine and the Colorado Springs signatories are forthright and permissible, one imagines, only because he shares their wider goals.

The debate over the validity of inclusive language translations of Scripture is still in its early stages and this book reflects the inchoate state of scholarship. Carson makes extensive use of private communications, magazine articles, unpublished essays, conference papers and material available on the Internet. How much further the matter will be carried remains to be seen, but at least we now have a well-reasoned, instructive and accessible rejoinder to the precipitate reaction of conservative evangelicals in the US to the NIVI.