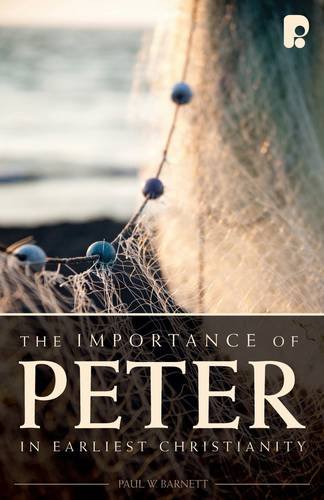 The Importance of Peter in Early Christianity

One of Paul Barnett’s acknowledged strengths is the historical interest he takes in the New Testament accounts, bringing together geographical, political, and cultural observations to inform exegesis. The Importance of Peter in Early Christianity continues this legacy. It is a small book, accessible to entry-level readers, comprised of short chapters with helpful subheadings and clear conclusions (though the choice of endnotes rather than footnotes was, for this reader, more distracting than simplifying). The book seems intended for a broad audience also in the sense that it often suggests rather than assumes the historicity of the New Testament.

Barnett begins by introducing readers to the apparent “paradox of Peter” (ch. 1), followed by a historical exploration of Peter’s geographic, cultural, and linguistic background (ch. 2). He makes the interesting claim that Peter was “almost certainly” a disciple of John the Baptist (p. 7). The book then examines Peter’s call (ch. 3) and his time with Jesus (ch. 4) prior to his fall and restoration, at which point Barnett makes the unusual assertion that Peter’s return to Jesus after his betrayal was his “conversion” (ch. 5, discussed further below). A discussion of Peter’s role as apostle (ch. 6) is followed by chapters on Peter as “President of the Council of Apostles” (ch. 7), the “eclipse” of Peter in AD 42–48 (ch. 8), the Antioch crisis and the Jerusalem Council (chs. 9–10). Next, Peter is examined according to his movements west (ch. 11), his time in Corinth and Rome (chs. 12–13), his first letter (ch. 14), martyrdom (ch. 15), influence on Mark’s Gospel (ch. 16), and enduring influence (chs. 17–18).

A strength of Barnett’s work, besides achieving a succinct explanation of the most germane texts relating to Peter, is the food for thought that he offers in areas beyond what is commonly known. His style is one which freely offers suggestions and quite speculative possibilities. He explores fruitfully, for example, the extent to which Peter was likely helpful to young Paul when they spent days together, challenging the argument that Paul had “no knowledge of the historical Jesus” (p. 41).

Having stated this as a strength, the scale of this practice arguably weakens the work overall, especially when compounded by questionable corollaries. On page 90, for example, I counted nine explicitly speculative assertions, most of which I found unconvincing. The result resembles eisegesis, and sometimes leads Barnett to make rather odd claims about significant theological matters, before the discussion simply moves on. As one example, reading of Peter’s “conversion” (p. 30, 33–34) had a jarringly anachronistic ring to it. Barnett says, “Remarkably Jesus’ words then imply that Simon was yet to be ‘converted’. This is the force of the words, ‘when you have turned again’ – epistrepsas.” (p. 34). Such a theologically significant assertion, which implicitly throws into question the continuity of covenants, demands far more theological and exegetical support than can be offered by the verb epistrepho, which can simply mean “turn” or “return.”

A second concerning feature of this work was the extent to which it seems to have been influenced by the approach and interests of critical Petrine scholarship, which leads to clashes with the New Testament’s emphases. Barnett in the Preface credits “Martin Hengel’s luminous Saint Peter: The Underestimated Apostle” (p. ix) for sharpening his interest in Peter, and the early chapters in particular share some of Hengel’s troubling interest in matters foreign to the text, and an implied distance between the historical events and that which is recorded in scripture (cf. my earlier review of Hengel’s book in Themelios 37.3).

The supernatural and superintending work of God is at times explained primarily by natural (by which we might include historical, psychological, or cultural) causes, and Peter’s character and personality are credited more explicitly to explain Peter’s rise and prominence in the Gospels. He writes, for example, “Apart from Peter’s influence Jesus might have been remembered as an unorthodox rabbi who gave unusual judgements about the law” (p. 3), which seems to imply Jesus’s success was dependent upon Peter’s influence, rather than on the God whose plans are not thwarted and who raises his servants at will.

Another example is the way in which Peter came to accept Gentiles as equal members of the covenant community. Barnett posits, “Although he was a strictly observant Jew, as leader of the Jesus movement after the resurrection he showed remarkable flexibility in welcoming non-Jews into membership of the new covenant people” (p. 5). (Peter’s change in “temperament and personality” [p. 14] is not so much to be credited, as the Spirit who filled and equipped Peter for his prominence and work.) The Book of Acts, however, would not have us credit Peter’s flexibility for such a monumental change; in Acts 10:1–28 God uses numerous miraculous events to overwhelm Peter’s reluctance to “associate with or visit” Gentiles (v. 28), let alone fully welcome them as God’s people. Barnett’s brief epilogue, however, provides a more explicitly theocentric, and I would add accurate, appreciation of Peter’s life and ministry.

Similarly, while Barnett does not deny that Peter wrote 2 Peter, it may have been critical scholarship’s distrust of 2 Peter that led Barnett to almost disregard its contribution (see references to it on p. 110 and pp. 173–74 n. 4). Christian readers buying a popular-level biography of Peter might wonder why the portrait was not informed by the riches of Peter’s second letter, even if critical scholarship has traditionally excluded it.

Overall, Barnett provides a stimulating biography of Peter, combining sound exegetical and historical perspectives with more speculative possibilities, many of which may inspire fresh investigation and discovery.