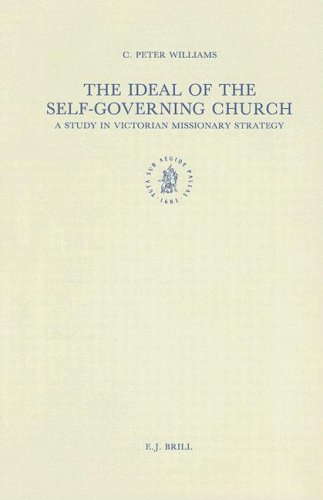 The Ideal of the Self-governing Church: A Study in Victorian Missionary Strategy (Studies in Christian Mission Series, Vol 1)

Peter Williams, formerly Vice-Principal of Trinity College, Bristol, has brought us a worthy first volume in Brill’s new series of Studies in Christian Mission. If the series maintains the standard of this pace-setter, it will prove a gold-mine for serious students of missiology.

For the church historian, this is an important book, carefully exploring the complex world of missionary attitudes in the 19th century towards indigenous leadership and structural independence in the emerging churches. For the serious missiologist, it is an even more important book; for the missiologist often has one foot in the academic world and the other firmly planted in the world of sharp-end mission activity and relationships. From that perspective, it is one of the strengths of this book that it not only researches and documents the past with integrity and thoroughness, but also illuminates a key area of current debate—namely, how, in the arena of pioneer church planting and evangelism (of which a very great deal remains to be accomplished world-wide, despite rumours to the contrary), can we ‘produce’ churches cheerfully in fellowship with the international family yet at the same time sensitively contextualized and with strong national leadership?

Williams’ book is primarily a study of the policies and practice of the Church Missionary Society in the 19th century in relation to self-government. It is his thesis that the famous ‘three self goals (self-government, self-propagation, self-support), normally associated with Henry Venn as chief advocate, were in fact widely held by Victorian missionaries and their supporters back home and that Venn was less of an innovator than may have been supposed. Williams examines the differing perceptions of what ‘self-governing’ might mean, and how such a state might be achieved—and then why it generally wasn’t.

There is, of course, the peculiarly Anglican dilemma: how to relate to Canterbury? That that relationship must be structural and expressed through English-style bishops was assumed by most and complicated things no end. Venn in his later years believed that there should be parallel structures: native churches led by native bishops and with freedom to adapt considerably, and separate, very traditional English churches for expatriates, including, if necessary, expatriate missionaries. Such a concept was radical, intensely realistic about the difficulties of getting Europeans to submit humbly to being led by Africans or Indians, and intensely unrealistic about the sheer unworkability of two systems operating side by side on an equal footing. It also begs the much-debated contemporary question as to whether homogeneous unit churches may be pragmatically effective at the unacceptable price of denying the gospel’s challenge to barriers of race and class.

Nonetheless, even here Venn had many sympathizers and many followers. To many, it was the implementation and not the theory that posed the problems. It was not until early in the 20th century that Venn’s ideas finally faded away under pressure for one integrated church and episcopal structure, theoretically equally open to Indian and African leadership but in practice generally closed to it. In the afterglow of high imperialism, few seriously challenged the arrogant assumption that European culture, education and experience was superior to all else.

Williams’ book is an intriguing study of the letters and Council papers, the experiments and struggles, the politicking and occasional skullduggery, the successes and failures, ‘on the ground’, that described, recorded and shaped CMS work through the 19th century. It is a densely packed account, and I was glad to read it twice to do justice to so much detail. Rereading was no hardship since it is attractively written.

Sadly, the inevitable high price for a specialized book will make it less widely accessible than it most usefully should be. I warmly recommend its purchase to academic librarians; I shall also be encouraging friends in the missions leadership fraternity to read it, precisely because it seems to me to have exactly the potential with which Williams closes his introduction: ‘It is my prayer that this work of history will provide perspectives and clues which will aid the Church’s outreach in the future’.