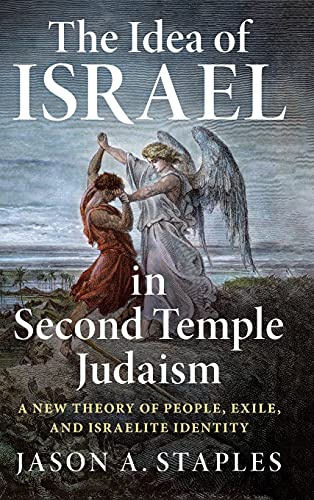 The Idea of Israel in Second Temple Judaism: A New Theory of People, Exile, and Israelite Identity

How would a first-century Jew think of herself? What terms would she use to describe her national, cultural, and social identities? A bulk of scholars have maintained that she would call herself an Israelite among those who share her identity. They argue that Israelite is an insider term. Those who were not Israelites would call her a Jew—an outsider term. She may appropriate the term Jew when in dialogue with outsiders or diaspora Jews that had accommodated on this term.

Jason Staples argues persuasively against this understanding of the terms. For Staples, Second Temple texts use Ioudaios (Jew) to refer to “a person descended from the southern kingdom of Judah or otherwise incorporated into that ethno-religious group” (p. 52). Israelite refers to a broader category including not only those descended from Judah, but the entire twelve-tribe people of Israel. Israel most frequently refers to either the ancient kingdom of Israel or a future, eschatological restoration of the twelve tribes of Israel. Staples divides his argument into three parts.

In part 1, Staples shows the history of the insider/outsider paradigm for understanding the terms Israelite and Jew. He shows that the paradigm arose from sociological concerns of nationalistic Germany in the early twentieth century and not from the Second Temple period sources. He also discusses the relationship of Samaritans to Jews, showing that Second Temple period sources refer to the Samaritans as non-Jews, yet of Israelite heritage. They remain Israelites, but not Jews.

In part 2, Staples shows that narrative, prophetic, and post-exilic canonical texts all present a rather consistent restoration eschatology. The Pentateuch, Former Prophets, and Chronicles all argue that Israel was, is not, but will be again. The prophets declare a future, restored Israel alongside a restored Judah. Post-exilic texts look at the return to Yehud as incomplete and ultimately failed. Those who returned are not a restored Israel and Judah but Persian “slaves” (Neh 9:36) in the land of ancient Israel. Across these diverse texts, Israel refers to either the northern tribes, the ancient covenantal people, or a future restored people.

In part 3, Staples addresses a wide-ranging group of Second Temple period sources—from the Old Greek to Josephus, Philo, the Dead Sea Scrolls, and even Second Temple period apocalyptic literature. He argues persuasively against those who claim some of these texts contain a diaspora-positive theology. He shows that they continue to assert the restoration theology of both earlier non-canonical and canonical sources.

Though technically the final chapter of part 3, chapter 12 serves as a summary and conclusion to the entire work. Staples concludes that across the wide array of literature assessed, “the partitive relationship between Israel and Judah established in biblical literature persisted … ‘Jew’ continues to refer to a subset of Israel” (p. 340, emphasis original). He concludes, “Jews in this period did not anticipate merely a Jewish restoration but a full restoration of all Israel” (p. 341, emphasis original). With helpful charts, he shows how a Second Temple period Jew would consider the relationship between the terms Israelite, Jew, and Hebrew. He notes that the New Testament is itself Second Temple period literature and suggests that we reassess terms like “kingdom of God” in light of Israelite restoration theology and reconsider passages like Romans 11:26—“all Israel will be saved.”

The book presents massive and wide-ranging research. Staples easily moves from discussions of Chronicles to Josephus to 2 Baruch. The footnotes are voluminous and helpful. Despite the occasional mistake, such as the misattribution of a quote by Franz Rendtorff to Rolf Rendtorff (p. 186), the book has been well edited. The immense bibliography of 56 pages will profit readers and scholars interested in further work on this topic.

For a book so well researched and presented, there are a few areas for improvement. First, in discussions of diaspora theology, the book would have profited by greater interaction with the Joseph narrative in Genesis—a text ripe with questions of cultural identity. Occasional mention of the Joseph narrative appears, but greater interaction could have strengthened Staples’s arguments even more. Second, although the initial thesis set out to distinguish Israelite, Ioudaios, and Hebrew, the latter term often appears extrinsic to the book’s argument. As Meir Sternberg has shown (Hebrews Between Cultures [Bloomington: Indiana University Press, 1999]), evolving Hebrew identity plays a significant role in Israelite and Jewish thought. Finally, the reader longs for more interaction with the New Testament and early Christian literature. The final pages leave the reader hoping for direct interaction with the New Testament, which one hopes Staples will present in a future monograph.

The Idea of Israel is an excellent resource—even if readers may disagree with a conclusion or presupposition here or there. Although technical, the book remains readable and engaging. Students of biblical theology will profit from the implications for understanding Israel in both the Old and New Testament—especially in relation to Israel, the church, and their relationship. Pastors will profit from consulting the book when preaching from texts as diverse as the Major and Minor Prophets, Ezra-Nehemiah, Esther, Ephesians 2–3, and Romans 9–11.