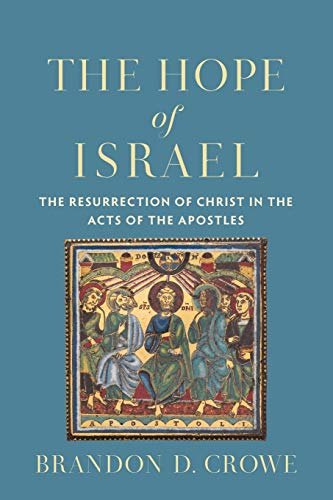 The Hope of Israel: The Resurrection of Christ in the Acts of the Apostles

The Hope of Israel is a masterful work that explores the centrality and significance of Christ’s resurrection in the book of Acts. Brandon Crowe, associate professor of New Testament at Westminster Theological Seminary, has already contributed significantly to biblical scholarship with several earlier books, including The Last Adam: A Theology of the Obedient Life of Jesus in the Gospels (Grand Rapids: Baker Academic, 2017). In both The Last Adam and The Hope of Israel, Crowe takes a biblical-theological approach to his subject matter, in the tradition of Geerhardus Vos and G. K. Beale. In his most recent book, Crowe calls Jesus’s resurrection “a major artery” connecting the stories and sermons of Acts, “a powerful theological adhesive” unifying the book’s overall message, and “the logical key” to the apostles’ preaching (p. 5).

Crowe presents his well-crafted argument in two parts, each with four chapters. Part 1 features a useful introduction (ch. 1) and careful exegesis of key texts in Acts related to the resurrection, focusing on the preaching of Peter (ch. 2), Paul (ch. 3), and other voices such as James, Stephen, and Philip (ch. 4). Part 2 then considers the resurrection’s theological ramifications for the accomplishment and application of salvation (chs. 5–6), the defense and demonstration of Scripture’s truthfulness (ch. 7), and the coherence of the New Testament canon (ch. 8).

Crowe opens his book by appealing to Acts 17, where Paul consistently proclaims Christ’s resurrection to Jews and gentiles in very different contexts, demonstrating that “the resurrection is firmly rooted in the Jewish Scriptures, yet is also a message with universal relevance” (p. 4). His survey of scholarship demonstrates that while many have noted how important the resurrection is in Acts, there are surprisingly few extended treatments of this major biblical theme. Crowe asserts that his project offers “a new synthesis” and suggests “new possibilities” for how Christ’s resurrection functions in Acts and early Christian teaching; in my view, The Hope of Israel delivers on these promises.

Chapters 2–4 offer careful exegesis of key passages in Acts, demonstrating that the resurrection is “a sustained emphasis” in the preaching of Peter, Paul, James, Stephen, and other early Christians. Throughout, Crowe’s exegesis is sensible, he is conversant with the scholarly guild and the Reformed theological tradition, and he appreciates the nitty-gritty details of the Greek text while maintaining a focus on the book’s larger narrative and theological aims. For example, Crowe explains that the Spirit’s outpouring on Pentecost “indicates that Jesus is the living, ascended king who reigns over the nations” (p. 28). According to Acts 3, the cosmic restoration of creation “is indissolubly tied to the resurrection of Christ” (p. 35). Crowe also connects the promises to “raise up” a prophet like Moses (Acts 3:22; cf. Deut 18:15) and David (Acts 13:22) to Christ’s resurrection (pp. 37–38, 51). Crowe’s handling of the use of Psalm 2:7 in Acts 13:23 illustrates his exegetical rigor and theological sensitivity, as he explains that “the resurrection marks a new era of the eternal Son’s messianic sonship—for ‘today’ the preexistent Son is enthroned as the resurrected, victorious king of glory” (p. 61).

Crowe’s exegetical chapters give “extended, though not exclusive, attention to speeches in Acts” (p. 15), which explains his decision to organize chapters 2–4 around major “voices” in Acts. He acknowledges that “the narrative contours and narrator’s comments” are essential for understanding the theology of Acts (p. 15), but I would have liked to see Crowe explain his rationale for prioritizing the speeches and give more space to key narrative portions in Acts (and Luke). For example, Crowe paraphrases Acts 1:3 on page 21 but does not elaborate on Luke’s foundational claim that Jesus “presented himself alive to them … by many proofs.” Similarly, he offers extended analysis of Peter’s speech in Acts 3 but treats the lame man’s healing more briefly; a fuller discussion of Luke’s allusion to Isaiah 35:6 in Acts 3:8 might have further supported Crowe’s claim that “the resurrection of Jesus marks the inauguration of new creation” (p. 35).

In Part 2, Crowe explains that Christ’s resurrection is “the great turning point in the history of salvation” that marks “the transition from the age of anticipation to the age of fulfillment” (pp. 105, 111). He attempts a balanced presentation of the resurrection’s theological significance by considering Christ’s accomplishment of salvation (historia salutis) alongside believers’ experience of salvation (ordo salutis), reasoning that “continuity and discontinuity are complementary” in Luke’s narrative (p. 128). For example, Crowe writes that the resurrection is both “an impetus for mission” and also a crucial part of “the content of the message” (p. 124). He also stresses that believers are united with “the resurrected Christ” and receive all his benefits as “a unified, package deal” (p. 129, emphasis original). Crowe relates his focus on Christ’s resurrection to long-standing debates about the purpose of Acts, arguing that the book offers “a thoroughgoing defense of Scripture” by showing the necessity of Christ’s resurrection (p. 149). Chapter 7 briefly reviews Jesus’s biblical exposition in Luke 24 and the use of the OT in Acts and suggests possible resurrection texts from the Law, Prophets, and Writings. The book’s final chapter situates Acts in its canonical context. Crowe notes that Acts “was remarkably flexible” in its placement alongside the Gospels and the Pauline and Catholic Epistles, and that the book—and its resurrection focus—serves as “glue” that binds together the NT’s theological message (pp. 176–77). He concludes that Acts challenges present-day Christians to “feature the resurrection as a prominent emphasis” in the gospel message (p. 193).

The Hope of Israel is the definitive treatment of the resurrection in Acts. Crowe’s study models a rare blend of careful biblical exegesis and faithful theological synthesis, leading readers to “a renewed appreciation” of the integral role of Acts in the NT canon and the resurrection’s centrality for Christian theology and proclamation (p. 193). This is one of the most significant monographs on the book of Acts published in recent years and should be required reading for all theological students, scholars, and pastors who study and teach Acts.