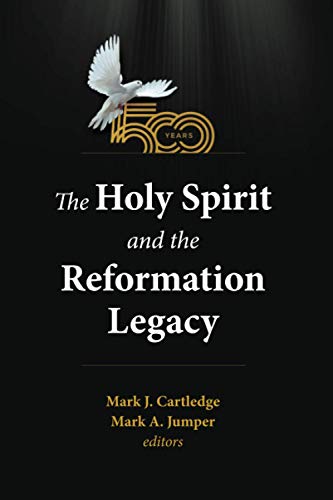 The Holy Spirit and the Reformation Legacy

A collection of essays arising from a 2017 conference by the same name at Regent University, Cartledge and Jumper’s edited volume The Holy Spirit and Reformation Legacy brings together a diverse team of scholars and pastors to highlight the relevance of Reformation theology for the contemporary Pentecostal-Charismatic movement. Encompassing such wide-ranging topics as Martin Luther’s presence in early Pentecostal literature, the impact John Calvin’s pneumatology exerted on Karl Barth, and Protestantism’s impact on the role of women within the church and society, it offers something for virtually anyone with interest in Reformation studies.

The editors introduce the volume with an overview of European Christendom immediately before the Reformation, particularly which factors helped give rise to it, asking “as Christians who affirm the providence and sovereignty of God, do we dare to discern the role of the Holy Spirit amid such momentous events?” (p. xix). They answer positively; though acknowledging new technologies like the printing press and the renewal of learning precipitated by the Renaissance as catalysts for the Reformation’s success, ultimately Cartledge and Jumper “dare to suggest that church, theology, and faith with its experience were the prime drivers of the era’s events” (p. xix).

The volume’s contributors heartily concur. In part 1, Samuel Muindi’s essay on Luther’s hermeneutics not only details the reformer’s commitment to sola scriptura but explains how “apart from the illumining work of the Holy Spirit, human rationality cannot decipher the divine message of Scripture” (p. 30). Luther’s potential to inform the Pentecostal movement’s exegesis is also discussed, given that neither party is inherently beholden to the assumptions of historical-critical scholarship. In chapter 3, Donald Kammer demonstrates how Luther has always been viewed favorably within Pentecostalism, with early literature sometimes appealing “to the authority of Luther and the Reformation as a means of establishing credibility and continuity with the past” (p. 48). The movement saw itself as a continuation of what God began in the 16th century, viewing “the Reformation as one stage in the continuing reformation of the church” (p. 48). Kammer’s essay indicates Luther may even help Pentecostals rediscover impulses of the primitive movement that have often been neglected. Though generally Arminian in soteriology, the early Pentecostals’ high doctrine of providence was evident in their preference “to embrace a view of their own genesis that portrays God’s direct intervention” in their lives (p. 55). Moreover, Mara Crabtree’s (chapter 4) subsequent piece on Luther’s view of suffering and Lance Bacon’s (chapter 5) on the reformer’s theology of the cross are, as the latter explains, “critical for an era in which problematic theologies seek power and possession above all else” (p. 89). This description has unfortunately come to embody certain fringe elements of the Pentecostal-Charismatic world.

Part 2, which focuses on Calvin’s legacy, commences with Andrew Snyder’s analysis of his pneumatology, specifically his doctrine of union with Christ. Like Augustine, Calvin taught that as “the Spirit binds together the Father and the Son, so too is the Spirit said to bind the elect to Christ” (p. 133). His pneumatological understanding of the sacraments, which Snyder later discusses, is also ripe for further conversation with Pentecostals (p. 140). Even readers familiar with Calvin’s pneumatology on such points may be intrigued by Fitzroy John Willis’s contribution on the reformer’s understanding of spiritual gifts. While Calvin viewed preaching and prophecy as synonymous, unlike most Pentecostals today, Willis’s claim that he “was not a cessationist” might be an overstatement and could benefit from further explanation. That Calvin views Old and New Testament prophecy differently may serve as a good starting point. Indeed, in the subsequent chapter Daniel Gilbert further discusses this gift, drawing on passages from his Institutes and commentaries to assert that “in Calvin’s description of the New Testament prophet, he left room for the continuation of the gift of prophecy as he defines it” (p. 199).

Part 3 concludes with several essays on major Reformation themes. Christopher Wilson again addresses cessationism in chapter 11, charging that while the reformers held miracles could occur in unreached areas, “their successors adopted a full-blown cessationism” (p. 205). Given his observation that Luther and Calvin frequently expressed their convictions in light of Roman Catholic claims of miracles, one wonders how they would have responded if they occurred in Reformed circles. Those keen to defend the traditional doctrine of imputed righteousness will appreciate James Henderson’s section (chapter 12), wherein he contends “only (forensic) justification by faith grants us a firm basis for seeking greater maturity”—contrary to some Pentecostal scholars who suggest the Eastern Orthodox doctrine of theosis might prove a fruitful alternative (p. 245).

The volume could have perhaps been enriched by moving beyond Calvin and Luther, indispensable as they are. Readers who treasure Zwingli’s legacy, for example, may be disappointed by the lack of essays specifically devoted to him, likewise for those influenced by the Anabaptists. These omissions are surprising given that the former’s position on the Lord’s Supper has been the majority report within Pentecostalism, as has the latter’s understanding of believer’s baptism and the separation between church and state. However, given that the pneumatologies of Luther and Calvin are often overshadowed by their doctrines of justification, ecclesiology, or other matters, this work will prove invaluable for Pentecostals looking for an introduction to their understanding of the Holy Spirit. Moreover, for Pentecostals and Charismatics who already recognize the richness found in their theologies and long for their wider tradition to do the same, this volume will undoubtedly be well-received.

Geoffrey Butler is a graduate of Tyndale Seminary and a current PhD candidate at Wycliffe College, University of Toronto in Toronto, Ontario.