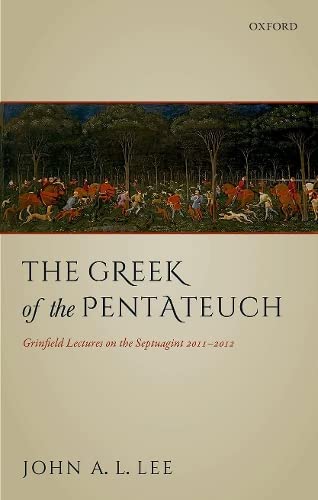 The Greek of the Pentateuch: Grinfield Lectures on the Septuagint 2011–2012

Written by John A. L. Lee Reviewed By William A. Ross
Old Testament

John A. L. Lee was trained in Classics and began his scholarly career writing on Septuagint lexicography at the University of Cambridge in the late 1960s. His doctoral work was decisive and groundbreaking. It quickly became a seminal guide for research in the Septuagint, as it has remained ever since (though perhaps now superseded by the book under review). Although in the intervening years he has worked in other areas—perhaps known best for his unexpectedly captivating book A History of New Testament Lexicography (New York: Peter Lang, 2003)—since his retirement Lee has largely returned to his original area of study. His new monograph, published nearly half a century after his doctoral work, brings decades of meticulous thinking about Koine Greek to bear upon the language of the Greek Pentateuch once more.

The contents of this volume were, for the most part, originally written as six lectures given for the prestigious Grinfield Lectures on the Septuagint at Oxford in 2011–2012. In its published form, Lee’s work presents a coherent and data-driven set of topics that address the language of the Greek Pentateuch and help draw conclusions about the translators’ methods, their knowledge of Greek, and their social context. Each chapter sets forth a wealth of information, insights, and leads for further research.

The first chapter begins where all research on the language of the Septuagint ought to begin: evidence. For Lee, the evidence of unrivaled relevance is in fact not the Hebrew text from which it was translated, but all contemporary texts in Greek. Without denying that the language of the Septuagint was influenced by the Hebrew original, Lee’s focus is on the text as what it is: a text in Greek. In many cases, this approach demonstrates that linguistic features in the Septuagint that were once considered “Semitic” are conventional Greek after all. To get to that conclusion, however, one must join Lee as he sets sail upon a sea of primary evidence, much of which is likely to be unfamiliar or uninviting to biblical scholars in the habit of taking only quick dips on the Septuagintal shoreline. Although accessing the evidence—most importantly the papyri and inscriptions—is easier than ever through digital platforms, handling it well remains a serious challenge. Through a series of case studies in the chapters that follow, however, Lee demonstrates the potential rewards.

Chapter two discusses different forms of variation within the work of the translators, whether due to personal taste, stylistic aspirations, or social context, all of which indicate their facility in Greek. Chapter three moves into educated language in the Greek Pentateuch, looking at numerous features that demonstrate the translators’ “education beyond the basics up to a higher level, at least to the end of the second stage of the ancient Greek curriculum” (p. 120). Chapter four then treats the use of fifteen features of Greek idiom with no corresponding text in the Hebrew, indicating the translators’ natural competence with the written language as native speakers. Lee then considers in chapter five whether the translators of the Greek Pentateuch collaborated in their work. He shows how numerous distinctive Greek-Hebrew translation equivalents are shared among the books, to the point that it indicates a “fully worked-out system” of collaboration, perhaps even working with a common glossary (p. 199, emphasis original). Notably, this conclusion runs directly counter to the obviously fanciful—but long accepted—idea promulgated in the Letter of Aristeas that isolated translators miraculously produced identical results. Chapter six focuses on freedom of choice, where Lee explores the presumed level of control the Hebrew source text exerted upon the translators. His basic position is that wherever they followed the Hebrew text closely in their translation—perhaps departing from conventional Greek usage in the process—they did so by choice and not due to incompetence. Historically, this view represents the minority report among Septuagint scholars, which Lee cleverly illustrates by citing a number of contrasting scholarly opinions about each case study he presents. In Lee’s view, the translators of the Greek Pentateuch were satisfied with producing an intelligible “Greek text with a Hebraic flavour,” which would become a style for later biblical literature (p. 257, emphasis original).

All of this material is drawn together helpfully in the concluding chapter. There, Lee reviews the main threads of his argument throughout the volume. The translators of the Greek Pentateuch had full competence in Greek, including specialized vocabulary that bespeaks their education, professional training, and social situation. As such, the Greek language is their point of departure—not Hebrew—as is evidenced in the areas of idiom, variation, and linguistic register, among others. On this basis Lee suggests that the Greek Pentateuch as a whole may be characterized as a kind of Jewish scholarly endeavor.

By way of critique, some might object to the minimalist role that Lee grants to the Hebrew text in his analysis of the language of the Greek Pentateuch. But there is a fair bit of Hebrew text and interaction throughout the discussion. Moreover, many of Lee’s examples are so potent for advancing his argument precisely because—as he constantly points out—the linguistic features under investigation cannot have been prompted by the source text. Rather, they demonstrate unforced decisions made by the translators for how their text communicates in and as Greek, even where the linguistic product may follow the Hebrew largely word-for-word. It takes considerable skill for a translator to accomplish both feats, and Lee does a masterful job illustrating how such skill is manifested throughout the Greek Pentateuch. Perhaps a more valid critique might be directed at how Lee handles linguistic data. While tables, primary text citations, and indices abound, it is certainly not the case that Lee “shows his work” for every issue addressed in the book. Often he presents the broad strokes of the linguistic data, providing only salient examples in order to move more efficiently towards his conclusions. One might guess that Lee’s counter to this critique would be to point to the relevant online databases he cites at the outset (e.g., www.papyri.info and epigraphy.packhum.org), and then cheerfully invite others to check over and build upon his work.

Lee is to be regarded as an authority on this topic. He has lectured on Greek for nearly thirty years at the University of Sydney and worked extensively in Koine Greek lexicography with widely respected scholars like G. H. R. Horsley and Trevor V. Evans. His insights are conveyed in prose that is clear and engaging, even as he handles less flashy business such as linguistic terminology or statistics. Lee manages to put onto the page his thrill of the chase through the vast and intricate evidence, and time and again he leads the reader towards conclusions that, in a number of cases, are almost humorously obvious once you arrive. As such, Lee’s work generously repays careful reading, since it also serves de facto as a lesson in research method. Those who wish to engage in Septuagint research for themselves cannot afford to overlook this volume. For at the center of Lee’s research agenda is a mindset that runs counter to that which tends to prevail, yet represents an important direction for the discipline: a hermeneutic of generosity towards the language of the Septuagint and of humility before the multifaceted reality of Koine Greek, which is still so far from being fully in hand. On that note, Lee’s exhortation is worth setting forth as the last word here:

It is too easy to assume that anything in the LXX that is not immediately recognizable as normal Greek is due to Semitic interference. Our procedure ought rather to be to assume that it might be normal Greek, that is, to begin with the presumption of innocence, and not decide on a verdict until the evidence on both sides has been fully investigated. (p. 22, emphasis original)