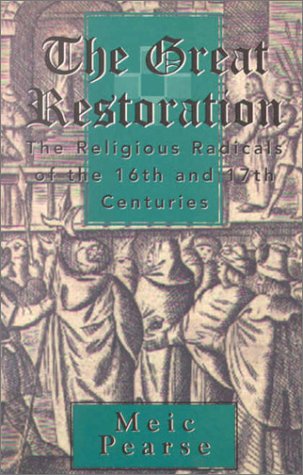 This work is an apt introduction to the continental and English radicals of the sixteenth and seventeenth centuries. Pearse’s approach is to view the material from a dynamic rather than an organic perspective. Instead of trying to discover historical connections between individuals or groups through their actions or confessional statements, Pearse simply indicates the similarity of thought. This is especially true in Pearse’s comments on the relationship between the continental Anabaptists and the later English radicals. He says that he does not claim an ‘organic connectedness’ between these groups, but suggests that they had a similar purpose. Each individual or group that Pearse spotlights had the ultimate goal: ‘the restoration of primitive Christianity along (in the sociological sense) sectarian lines’.

The various groups that Pearse surveys include the Lollards, the Swiss Anabaptists, the North German-Dutch Anabaptists, the Mennonites, the Spiritualists and the English Anabaptists of the sixteenth century. The seventeenth-century groups which receive attention are the Separatists, the General Baptists, the Particular Baptists, and the Quakers. As Pearse begins his treatment of the continental Anabaptists, he is especially keen to point out that many of these radicals were simply acting on the logical conclusions of the thought of the magisterial Reformers, for example, Karlstadt and Grebel began as impatient followers of Luther and Zwingli, respectively.

Menno Simons is characterised in an inspiring manner. He is presented as the catalyst for rebuilding Dutch Anabaptism on an evangelical foundation. Pearse describes Simons as having ‘the most fruitful ministry of all the Anabaptist leaders of the sixteenth century’.

On the English scene, Pearse concentrates his efforts on the early leaders of movements. Robert Browne, John Smyth, Henry Jacob, and George Fox are presented respectively as pioneers for the Separatists, General Baptists, Particular Baptists, and Quakers. The contrasts in the ecclesiology and theology of these four groups are discussed in detail. However, the similarities in their thought are also indicated.

The strengths of Pearse’s work include his clear writing style. Even those students with only a casual interest in church history will find the text interesting and cogent. Pearse has organised his material well, the manner in which the individuals and groups are presented does not sacrifice their diversity in an attempt to place them within a specific movement. Also, Pearse interjects something which is missing in many historical texts, humour. His sarcasm appears in statements such as the one about the General Baptists of England who apparently had no concern if ‘the Church of England kept bishops, abolished them, or converted to Islam’.

The drawback of the work would be for those historians who are looking for a detailed examination of certain figures of the radical movement, but this is not the author’s purpose. He provides an introduction to the radicals for those who are just entering their study of these fascinating groups. In general, the author attempts and achieves to create an interest in the sectarian movements of the sixteenth and seventeenth centuries.