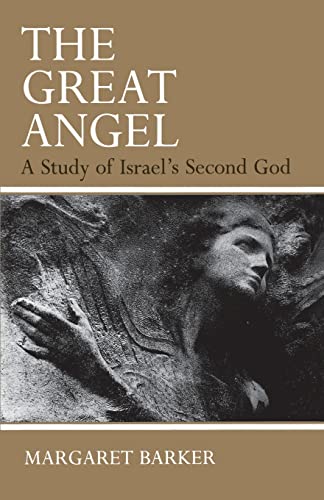 Margaret Barker’s latest book aims to challenge the view that Judaism in the first century was monotheistic in the way that we have traditionally understood it to be. In doing so she is tackling an area at the centre of NT studies at the moment, both at the scholarly as well as the popular level. The monotheism of Jewish belief is a vital cornerstone of the arguments of both Maurice Casey (From Jewish Prophet to Gentile God) and A.N. Wilson (Jesus). The basic argument was summarized by Wilson in an article in the Sunday Times during the week his book was launched: ‘… [T]hat a monotheistic Jew should have supposed himself to be divine … is historically impossible.’ It is this idea of historical impossibility that Barker seeks to undermine, through a study of the nature of Jewish understanding of (the) divine being(s).

Lamenting the narrowness of those who focus on one minute area of NT study, and thereby fall into error by failing to appreciate the wider context, Barker takes on a broad range of material through the history of Judaism ‘from Canaan to the mediaeval Kabbalah’ (p. xiii). The chapters are organized accordingly, starting with the evidence from the exile and the OT, through Philo, Gnostics and late Jewish writings, to the first Christians and the NT. She also considers material along more thematic lines, including studies of the Wisdom tradition, angels, and the occurrence of ‘the Name’ of God. Broadly speaking, her conclusion is that Jesus was seen as the divine angel figure Yahweh, who was himself one of the company of divine beings subject to El Elyon, the Great High God. This all sits within the range of possible Jewish beliefs about God—indeed, it sometimes appears that she sees this as ‘mainstream’ Judaism—and therefore it is historically likely that later Christian belief about Jesus as divine is entirely consistent with his own self-understanding as a Jew.

As she warns us, Barker aims to cover a vast range of material and this inevitably gives rise to frustration at the thinness of the argument in many places. She sees her earlier works (The Older Testament, The Lost Prophet and The Gate of Heaven) as, in effect, extended introductions to this one. It is sometimes difficult to know how far she assumes knowledge of these other works during her argument.

But the most striking thing about the book is Barker’s peculiar approach to the question of method in understanding texts. She acknowledges that her own approach is quite speculative, and her defence of that (p. 21) is that all other theories that deal with questions of origins are speculative too. But surely she misses the point: a theory or hypothesis may arise out of speculation, but its validity must rest on its satisfying some criteria, and it is any sense of these criteria, that could convert mere speculation into something of value, that is missing. So at one point Barker sounds the call to go back to the author’s intention in order to discover the meaning of the text. But she herself either bypasses the author’s intention, so that her agreement with a later interpreter shows us the true meaning of the text, or she holds to rather fanciful notions of what the author’s intention was. Do Gnostic interpretations of the Name (of Yahweh) as a separate divine being really help us interpret OT texts (p. 102)? Did Paul really mean to say that Christ was an angel in Galatians 4:14 (p. 223)? Can Revelation 21 really leave us in ‘no doubt that for John the heavenly Christ was the ancient Yahweh’ (italics hers, p. 203)? All this is oddly combined with a certainty about her own conclusions.

This methodological carelessness spills over into considerations of being and existence as well. Because Yahweh is said to slay the firstborn of Egypt (Dt. 32:35) but elsewhere (Jdg. 2:2) an angel of Yahweh is claimed to be the agent, source and redaction criticism allow us to deduce that Yahweh was known earlier to have been an angel (p. 32). In the NT, Jesus as the Power of God and the Wisdom of God is a twofold incarnation which shows that the Christians remembered the Jewish tradition of two great angels. All these peculiarities look like a misunderstanding of some of the straightforward ways in which language is used by real people concerned with something other than perfect consistency, and an overlooking of the comparative lack of concern in Hebrew thought with questions of ontology.

This is really a great shame, since Barker touches on a broad range of important issues in biblical studies—her reading is clearly extensive. She brings us face to face with many of the most difficult problems arising from the diversity of thought in the OT and NT, the NT’s use of the OT, and the methods employed in the hermeneutics of the early church. Her section on the NT is a useful survey of many of the important issues here. She also makes the most of the ambiguities inherent in the church’s historical discussions of the problems of heresy and orthodoxy. This is therefore a most challenging book. But too many questions with too few convincing answers make for frustrating reading, and I would rather turn to the more complete and compelling theses of (for example) Hengel and Hurtado.