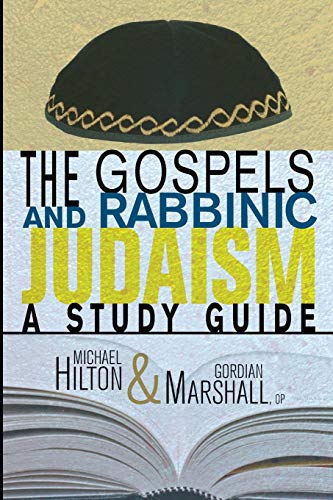 The Gospels and Rabbinic Judaism: a Study Guide

This book arose out of the experience of discussion groups conducted jointly by a Jewish rabbi and a Roman Catholic priest. It consists of seven ‘units’ designed to form the basis for similar groups where Jews and Christians wish to come together to discuss their common roots and the reasons for their differences.

The subjects studied include the more theological (‘The Great Commandment’; ‘Who Can Forgive?’), the historical (‘The Synagogue’), the literary (‘The parable and the Mashal’), and the halachic (‘The Ox in the Pit’; ‘Shabbat’; ‘Divorce’). More fundamental issues which separate the two religious traditions, such as Messiahship, salvation or resurrection, are deliberately omitted.

The Hebrew Scriptures are taken for granted as common ground. The passages for study are drawn from the texts written after Christianity and Judaism began along their separate roads, from rabbinic Jewish writings and from the NT. It is assumed that those who use the book will need some fairly elementary instruction on the basics of the other religious tradition. This means that the Christian reader is likely to find the comments on the chosen gospel passages brief and unsophisticated (and, for me at least, often questionable!), but may expect to find the Jewish material more useful.

Rabbinic literature is a notoriously difficult and treacherous area for the non-specialist to explore, and not a few NT scholars have been rightly chided for ill-informed or simplistic use of Jewish ‘background’ material. Introductions to rabbinic literature are typically complex and forbidding, full of obscure words half understood. This book will not give you a comprehensive grasp of rabbinic scholarship, but Rabbi Hilton’s considerate guidance through a number of specific issues and texts offers a more ‘user-friendly’ introduction. The result should be a more sympathetic awareness of what the rabbis were trying to achieve, once we realize that their apparently illogical arguments derive from a context of shared traditions to which we come as outsiders. It is a pity, however, that the nature of the project means that we are presented only with short extracts from both rabbinic and NT writings, and have no opportunity to get the feel of these writings as literary wholes.

The book is not designed primarily for solo reading, but for group discussion. I am not sure how many Themelios readers are likely to be able, or wish, to join or to initiate the sort of open-ended Jewish-Christian dialogue here envisaged. The authors see it as a process of mutual discovery and understanding, and discourage any idea that either religious tradition is ‘better’ than the other, still less any desire to win converts. They expect the process of dialogue to be surprising, and often painful, and encourage the users of the book to bring their suspicions and prejudices into the open. If the book is used as they intend, the result is likely to be more in the area of exploring the attitudes and relationships of those involved than in any ‘objective’ understanding of the texts studied.

The origins of Israel in Canaan: an examination of recent theories

Prosperity theology and the faith movement

Writing the history of ancient Israel: a review article

by David G. Deboys
VIEW ALL VIEW ALL

Studies in the Religious Tradition of the Old Testament

The Sermon on the Mount: Utopia or Program for Action?

Hostility to Wealth in the Synoptic Gospels

Reviewed by Robert Willoughby
New Testament
VIEW ALL VIEW ALL