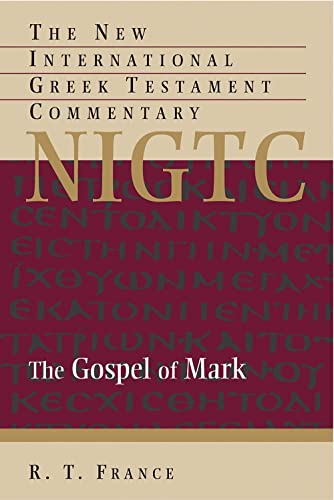 THE GOSPEL OF MARK (NIGTC)

Commentaries are about making judgements. In working with a gospel the commentator has numerous ‘calls’ to make about what to include and what to leave out so as to benefit the reader most. Commentaries that are judicious in what to include and exclude are rare. R.T. France’s commentary on Mark is one of those rare commentaries that makes solid judgements about what is most needful in thinking through Mark. Though some might wish for more exhaustive discussion on some matters, France usually gives enough information about a given debate that one has a further direction to pursue if desired. The reader is spared long-winded discussion of things in which one might not really be interested. The goal of the commentary is set out right at the start by saying he did not wish to write a commentary on commentaries. So he concentrates (rightly so) on exegesis of Mark and on the text Mark gives us, not its origins.

France regards Mark as a kind of ancient biography, rooted in Mark’s interaction with Peter, and laid out as a ‘drama presented in three acts’ with a prologue (Prologue: 1:1–13; 1:14–8:21; 8:22–10:52; 11:1–16:8). Mark focuses on Jesus and desires to present who Jesus is, what he came to do as ‘the dying Son of Man who is in truth King of the Jews’ (26). Out of this understanding develops Mark’s concern for discipleship, the presentation of the kingdom of God, the portrait of Jesus as revealed with a mystery element that challenges normal human thinking, and an eschatology focused on God fulfilling his promises in history, an eschatology not of the end of the world but of a new beginning operating within human history.

One matter in the commentary that certainly will be discussed is the handling of the Olivet Discourse and the interpretation of end time metaphors. As always the question is posed how ‘literally’ we should take such metaphors. France, like many others in the UK, opts for a reading that emphasises the figures as figures, not to be over-pressed for their literalism. France is clear that his reading is rooted in an approach like that of G.B. Caird (535). So we should not expect cosmic elements in the end nor is the discourse about ‘about a collapse of the universe’ (533). They are about ‘drastic events on the world scene, interpreted in light of divine judgement and purpose’ surprisingly applied to Jerusalem, the temple, and its fate (533). Mark 13:26 is about enthronement, not parousia. He reads it in line with Mark 8:38 and 14:62; all three texts treat exaltation. Now those who are ‘more literal’ about such matters simply note that when Jesus was crucified the testimony of creation was a part of these events. This is something that could well be viewed as a lesser foretaste of what is to come as a ‘pattern’ of judgement common in Jewish readings of divine history: that to speak of Jerusalem and worldly events is not to rule out a final, greater, more intense eschatological consummation, so that one judgement pictures well in microcosm and mirrors the other judgement at the end. Things are apparently described that represent the cosmic evidence that God was at work in a special way. The early church as well seems to have expected something quite unusual at the end as 1 Thessalonians 4:13–18 indicates. The language of gathering looks to a consummation and vindication, which enthronement commences but return accomplishes. So this discussion about how to read Jesus’ remarks about the end will surely continue. There is no doubt that some of this imagery has been over-read in the past. The question is whether the pendulum has now swung too far in the opposite direction. However this internal discussion about eschatology should not cloud the overall merit of what is surely a fine commentary.

In sum, R.T. France’s commentary is a most useful addition to a gospel that is served by many solid commentaries (Cranfield, Taylor, and Marcus, Hooker, Guelich-Evans and Gundry just to name a few). It is often worth the first read among these as it sifts data well and keeps the reader’s focus on what is most important to appreciate. France set out to write a commentary on Mark, not on Marks commentators. He has succeeded very well to our great benefit.