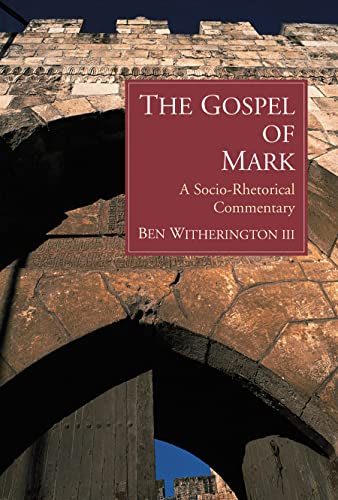 THE GOSPEL OF MARK: A SOCIO-RHETORICAL COMMENTARY

The prolific Ben Witherington has put us in his debt once again. This commentary joins three others in which he has used a socio-rhetorical approach, The Acts of the Apostles, Conflict and Community in Corinth and Grace in Galatia.

Witherington is convinced that Mark’s Gospel should be classed as an example of ancient biography. He is also largely persuaded by arguments for a substantial Aramaic component in the biographer’s source-materials. He believes Mark has chosen to present this story in an ‘apocalyptic’ framework, where the world is a spiritual war zone and where Jesus does battle with human and demonic adversaries. Witherington is doubtful about many modern readings of Mark as story, because the Gospel is not a work of ancient or modern fiction.

Taking Mark’s narrative as a whole, Witherington sees it as structured to answer two key questions. The question behind the first half is ‘Who is Jesus?’, and the answers culminate in Peter’s confession in 8:27–30. After this pivotal moment the focus shifts to the second question, ‘What is the mission?’. That it is one of suffering is then made explicit, and the passion narrative shows that mission being accomplished.

As a socio-rhetorical commentary, this work aims to keep in view the two social contexts of Mark’s Gospel, Galilee and Judea in the 20s and 30s on the one hand, and Rome in the 60s on the other. Witherington argues for a date just before 70 ad, with John Mark writing from Rome for Roman Christians. His readers were living in volatile times, and were facing persecution and possibly execution. His Gospel was designed to encourage them to follow Jesus in the way of the cross and also to avoid the mistakes of the first disciples.

As a socio-rhetorical commentary, this book takes us through the text with key concepts from Greco-Roman rhetoric in mind, to try to understand how and why Mark shaped his telling of the individual stories. Mark’s rhetoric is of the sort one finds in the elementary handbooks, and it operates primarily at the level of the pericopes rather than in broader patterns in the work as a whole. Witherington continually reins in scholars who have discovered elaborate and sophisticated rhetorical devices in Mark, of the kind that he himself is happy to recognise in Paul.

Witherington does not ignore the traditional debates, on issues such as the messianic secret or the original ending. For example, he believes ending with 16:8 is implausible, judged by ancient biographical standards. Such an ending might be subtle, ‘but it hardly comports with the rest of the Gospel where Mark is about as subtle as a sledgehammer’ (46). ‘Mark’s narrative begins with the gospel, and we may expect it to end in like fashion’ (417).

There is an Introduction of 62 pages, and an Appendix, ‘Mark’s Perspective on the Disciples’. There are also Indices of Modern Authors and of References, but unfortunately no Subject Index.

This is an excellent commentary, written by a top evangelical scholar in a clear and engaging style. Two groups of Themelios readers will want to consider it. First, the student of biblical studies will find it explains the text in detail, engages with key figures and debates, offers socio-rhetorical readings, and supplies occasional excurses on more technical issues. Second, the preacher will find it a useful companion on a journey through Mark’s Gospel, updating knowledge, providing background, unpacking passages, and offering fresh and sometimes provocative insights. However, the ‘Bridging the Horizons’ sections are not as helpful as I had hoped. There are only ten in total, three of these on chapter 1, so most tend to deal with too large a section. A little and often would have been preferable.