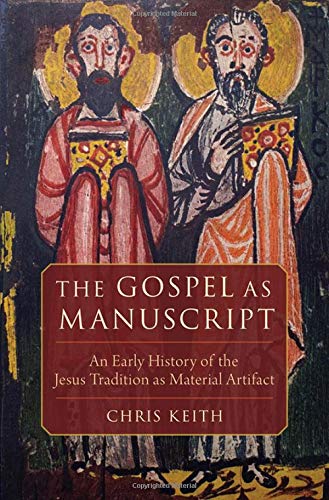 The Gospel as Manuscript: An Early History of the Jesus Tradition as Material Artefact

Manuscripts, rather than being merely a vehicle for text, are material objects more akin to a finely crafted sculpture or work of art. In his latest work, The Gospel as Manuscript, Chris Keith adds his voice to the growing chorus of scholars giving greater emphasis to manuscripts as material objects in their own right (p. 9). Chris Keith is Research Professor of New Testament and early Christianity and is the Director for the Centre for the Social-Scientific Study of the Bible at St Mary’s University, Twickenham.

The main thrust of The Gospel as Manuscript is clearly articulated in the introduction: “the Jesus tradition that unfolded in the first three centuries of the Common Era would not have happened in the precise way that it did without manuscripts” (p. 9). Keith places this thesis in tension with but not in complete opposition to theories of orality that prefer “living traditions” over the written word (p. 6).

This work is composed of three parts. Part 1, “The Gospel as Manuscript,” consists of chapters 1 and 2. Chapter 1 engages with the work of both William A. Johnson and Jan Assmann (p. 17) and proposes that manuscripts and the texts they contain functioned as cultural “identity markers” (p. 33). Chapter 2 orients the present study within both past and present scholarly trends (pp. 36–39), though the bulk of the chapter primarily dialogues with the work of Eva Mroczek and Matthew Larsen (pp. 40–64).

Part 2, “The Gospel as Gospels,” containing chapters 3, 4, and 5, analyzes evidence from the Synoptic, Johannine and Thomasine traditions indicating that they were in competition with the textualized Markan tradition. Chapter 3 postulates that “Mark enabled an open-ended reception history for the Jesus tradition when he shifted it into written medium” (p. 13). Chapter 4 highlights the importance of Mark’s mention of its own “reader” (ὁ ἀναγινώσκων, Mk 13:14; p. 111), Matthew’s self-reference as a book (βίβλος, Matt 1:1; p. 115), and Luke’s competitive posture towards other Gospels such as Mark (p. 112). Chapter 5 focuses on the Johannine attitude towards other written Jesus traditions (John 20:30–31; 21:24–25; p. 135) and the Thomasine incipit positions itself in competition with other written Gospel predecessors (p. 154–55).

Part 3, “The Gospel as Liturgy,” includes the final two chapters. Chapter 6 discusses the instances of the “public” reading of the Jesus tradition referred to in early Christian sources and argues that it was public reading during worship gatherings that helped to shape the canon. Chapter 7 evaluates the relationship between Jewish synagogue worship and the liturgical reading of the Torah and the practice of reading Jesus traditions in Christian assemblies. In the final segment Keith concludes the work by stating that “the Gospel book, and what one did with it, became a physical space on which Christian standing with the rest of the world was negotiated” (p. 235).

The main thrust of the book works from the premise that Mark “offers no indication whatsoever of why it was placed on a manuscript” (p. 90). In addition, it is noted elsewhere that it is “a fact that textualization of tradition was not a predetermined eventuality or organic outgrowth of the tradition process” (p. 97). According to Keith, Mark and the other Gospel writers then began to see their textualized traditions in competition, either with the Jewish scriptures (p. 129), or, as in the case of Luke and John, in competition with Mark and other textualized Jesus traditions (pp. 130, 154).

In light of this, it is surprising that Keith does not consider passages such as Deuteronomy 18:18 (that a prophet like Moses was foretold) and the role this prophecy played in second temple Jewish messianic expectations. Keith already noted that Matthew likely viewed Jesus as a Moses-like prophet (p. 118) and, as Deuteronomy 18:18 reveals, this coming Moses-like prophet was to receive and to speak a new message from God. This is evidenced within the Qumran community in writings like DSS 4Q175, which quotes from Deuteronomy 18 and refers to a coming prophet like Moses and it is obvious that this community textualized their own messianic traditions. It appears that if the early Christians viewed Jesus as a fulfillment of this prophecy—that Jesus came with a new message from God (see Matt 1:1; John 5:46; Acts 3:2–23)—the natural progression then would be to write this new message from God into a book in the tradition of Moses (Deut 31:9). This places the Gospels not in “muted” competition or in tension with the Jewish scriptures as Keith argues (p. 129) but as a natural continuation of messianic prophecies in the second Temple Jewish tradition.

Despite this, The Gospel as Manuscript gives a detailed overview of the impact that the written Jesus traditions and their reading in worship gatherings had upon the Christian community in the shaping of the New Testament canon. Keith is to be commended for this thorough and up-to-date engagement with the relevant scholarship on orality, liturgical reading of the Jesus traditions, and early Christian book culture. The work is approachable yet rigorous, making it beneficial to scholars, students, pastors, and teachers alike.