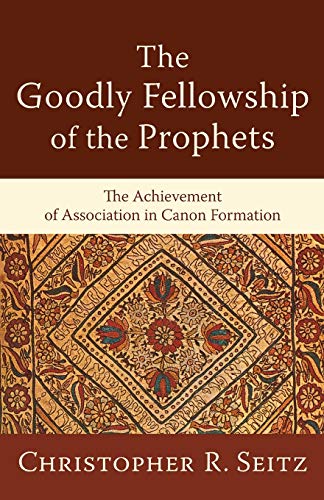 The Goodly Fellowship of the Prophets: The Achievement of Association in Canon Formation

This book, dedicated to the memory of Brevard Childs (died 2007), summarises and builds on Seitz’s earlier studies of canon formation. As a sincere admirer of Childs, Seitz seeks to take seriously the theological dimension of the historical process that led to the canon of Scripture as we know it. This book is a further contribution by Seitz to the program initiated by Childs, who spoke of “the search for the Christian Bible,” namely, how is a believer in Christ to read and apply the Scriptures of the Old and New Testaments.

The material in the book began its life as public lectures at Acadia Divinity College in Nova Scotia in 2007. There is inevitably some overlap in his discussion of the Book of the Twelve (= Minor Prophets) in his earlier book Prophecy and Hermeneutics: Toward a New Introduction to the Prophets (2007), as Seitz himself acknowledges. More annoying is the frequent repetition of ideas within the boundaries of the present volume; a little editing may have reduced this without loss of clarity. No doubt this is due to its origin as public lectures of a popular nature where repetition is a requirement.

Seitz sees an analogy between the Book of the Twelve as a coordinated prophetic anthology and the Pauline letter collection, with the first possibly influencing the formation and pattern of the second. This observation is a subset of his wider thesis that the OT is of central significance for NT canon formation. The thesis of Seitz is that Law and Prophets (excluding the disparate collection of Writings) provided an essential model for the arrangement of the NT.

The prophetic books (encompassing both Former and Latter Prophets) are, according to Seitz, coordinated by a number of important interconnections (e.g., synoptic passages, cross-references in the headings of certain prophetic books), in contrast to the books of the Writings, which remained discrete compositions and which can be found in a number of alternative orders. Seitz views the prophetic division of the Hebrew Bible as “a canonical achievement of the first order” (p. 44). He disputes the assertion of John Barton that the order of biblical books is of small importance or that a theology was only “read in” to the canonical order at a later date. Nor does he follow Marvin Sweeney, who thinks in terms of rival Hebrew and Greek orders. This reviewer staunchly approves of Seitz’s judgment in these matters. Controversially, in the contemporary scholarly climate, Seitz argues that we can conceive of canon and scriptural authority prior to the closure of the sacred collection of books. Viewing as he does Law and Prophets as the core of the OT canon, Seitz asserts that the possible fluidity of the third canonical section (Writings) for a long period (even to post-NT times) is not crucial to the concepts of canonicity or authority.

The widespread conception of “Law and Prophets” in Seitz’s eyes gives priority to the tripartite Hebrew ordering of books over against the various Greek orders, and, for him, the fundamental divide is not Law/Prophets but Law-Prophets/Writings, given the evident fluidity of the order of books in the Writings. The works of the Writings have a “stand-alone” character; the order of books is more variable; and any particular order is of less hermeneutical weight.

Seitz provides a brief history of scholarly work on the Minor Prophets, wherein there has been an increasing appreciation of the literary cross-references between the twelve prophetic sections, so that the twelve prophets are to be read in the light of each other. Seitz himself tries to maintain a delicate balance between preserving the individuality of the twelve witnesses and appreciating the overall effect of the Twelve as a unified corpus. Likewise, he notices the links between Isaiah and Micah, Kings and Jeremiah, Kings and Isaiah, etc., that he views as editorial efforts at an achievement of association. An entirely different canonical logic applies to the Writings, whose books are not so much related to each other as they are to books in the Law and the Prophets, so that they can migrate in subsequent listings (e.g. Judges-Ruth, Kings-Chronicles).

The Rule of Faith properly understood, says Seitz, relates the confession of Jesus as Lord with the OT (e.g., as in Irenaeus), so that it is really the OT that is the most significant factor in the formation of Christian theology and then the NT canon. The target of his comments, among others, is the recent work of C. D. Allert, wherein the Rule is elevated at the expense of the OT. So, for example, Deuteronomy’s function within the Pentateuch finds a correlation with John’s relationship with the Synoptics (p.103). The Twelve find an analogy in the Pauline corpus; Hebrews, Catholic Epistles, and Revelation have a similar hermeneutical role as the Writings (e.g., Hebrews can migrate to the Pauline corpus; 1–3 John and Revelation have obvious connections with the Fourth Gospel).

I am a little amazed at his off-the-cuff remark that von Rad was correct in seeing apocalyptic as derived from wisdom circles, for I thought that von Rad had managed to convince only himself of such an unlikely thesis. Seitz needed to argue this case rather than just state it. Certainly the strong wisdom theme in Daniel helps to explain its home in the Writings rather than among other (?) prophetic books, but in the book of Daniel itself, wisdom is not really brought into relation with apocalyptic thought forms. This, however, is a quibble on my part. It is another example of Seitz’s fertile mind at work on an immensely important subject.