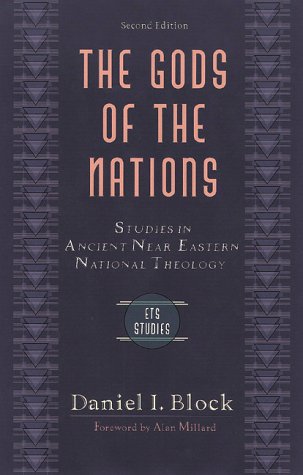 The Gods of the Nations: Studies in Ancient Near Eastern National Theology (Evangelical Theological Society Studies)

This is the second edition of a book first published in 1988. Yet, as the author says, this is not merely a reprint, but ‘modifications appear on virtually every page, and several chapters have been thoroughly reworked in light of the new discoveries’. Its aim is to examine the relationships between deities and nations and to determine the ancient Near Eastern perceptions of these.

Block poses four questions, largely corresponding to the main chapters: the origin of the deity-nation relationship; its everyday expression; its nature; and the circumstances and manner of its termination. He concludes with an examination of Ezekiel 8–11, to illustrate the significance of his study for the interpretation of the OT. Overall, the book shows that in many ways the Israelite approach to their relationship with their patron deity resembled that of their neighbours. At the same time it highlights those areas in which the Israelite perspective differed drastically.

The author demonstrates from a number of extra-biblical sources that the most common concept of the deity-nation relationship was territory-based. This contrasts with the OT where the primary association is with a people. The conclusion that Israel was unique among her neighbours in this respect and in their belief that God had called them to himself to be his people, is difficult to escape. This is reinforced by a comparison of the way in which deity-nation relationships are expressed. A discussion of human names and divine epithets leads to the conclusion that the notion of ‘national deities’ is somewhat misleading, since among nations outside Israel no exclusive allegiance is demanded, but rather other deities are tolerated.

Block draws an analogy with the feudal association of lords and vassals, and to test its appropriateness he then examines deity-land and land-people relationships. While several expressions relate to Yahweh’s ownership of the land of Israel, the most explicit statement of this demonstrates that his primary association is still with the nation. As for the relationship between peoples and lands, the available extra-biblical texts seem disinterested in the notion, whereas for Israel it was a critical issue. At the same time there was a widespread notion that the deity’s favour or disfavour was seen in the state of the land. Finally Block turns to the motif of divine abandonment, focusing particularly on Mesopotamian texts and Yahweh’s abandonment of the temple in Ezekiel. Again he notes similarities but also significant contrasts between Israelite and Mesopotamian thought.

Block presents his study with logic and clarity, covering all the major questions. If it has a drawback, it is that material is drawn from various periods of history, as the author himself acknowledges, with no place given to the evolution of thought in Israel or surrounding nations. Yet the nature of the work precluded this, and it is of great value in painting an overall picture, and in extracting principles which seem to hold good whatever the period. As a book that sets Israelite religious thought against the wider ancient near eastern background, displaying similarities and contrasts between them, it is to be highly recommended.