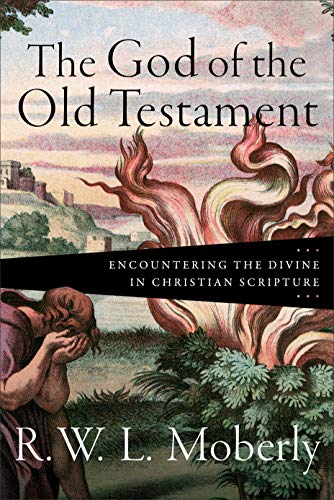 The God of the Old Testament: Encountering the Divine in Christian Scripture

Walter Moberly is professor of theology and biblical interpretation at Durham University and has composed many works on the interpretation of the Bible, especially the Old Testament. As someone who has been inspired and instructed in thought and life by Moberly’s oeuvre, I eagerly anticipated the publication of this tome. Here, he offers close readings of eight Old Testament texts in six chapters with a view to giving accounts of their significance as Christians Scripture for the concern of what it means to know that the Lord is God (Ps 100:3). Along the way, he judiciously converses with an impressive range of past and present thinkers on matters not only relating to biblical texts and Christian thought but also in contemporary culture, literature, and psychology.

The six chapters are flanked by an introduction and an epilogue. In the introduction, Moberly provides the rationale for his choice of Old Testament texts and sets out his approach to reading them as Christian Scripture. The latter he summarizes with the following words: “I propose to read the received form of the biblical text with a second naiveté in a mode of full imaginative seriousness that probes the subject matter and recognizes its recontextualization into plural contexts in relation to which I bring to bear a text-hermeneutics and reader-hermeneutics and also utilize a rule of faith” (p. 5). The terms he italicizes are then accessibly unpacked. The first chapter, entitled “The Wise God,” studies Proverbs 8:21–31 to consider what it means to live in God’s world here and now in the light of God as the wise Creator. “God creates in/by/with/through Wisdom” (p. 27) then “those who learn to love wisdom are in some way engaging with the true nature of the world, with reality as it is, and conforming themselves to it” (p. 28). Towards articulating what this might look like in the contemporary world, Moberly not only engages John Gray and Thomas Nagel on meaning and living but also gives generous space to discussing “was there a time when Wisdom was not?” and points out resonances between the calling voice of Wisdom in Proverbs 8 and the shining light of the Word in John’s gospel.

The second chapter brings us to Exodus 3 to reflect on the revelatory nature of “the Mysterious God,” focusing on the disclosure of the Divine Name in vv. 13–15. Technical and translational issues surrounding these verses are meticulously discussed. Their interpretative clues in the narrative context are also suggested: “the burning bush provides a fully appropriate symbolic resonance for the divine name ‘I AM WHO I AM’” (p. 66) as well as the ways of the Lord that frustrated and perplexed Moses’s hope in his first engagement with the pharaoh (5:1–6:13). This chapter includes a brief account of the history of interpretation of the Divine Name and concludes with reflections on the nature of divine revelation and human activities in the formation and reading of the Bible.

Psalm 82 takes center stage in the third chapter, “The Just God.” Moberly asks: “How should this psalm about an assembly of deities, in which all but one of its members are condemned to die, best be understood?” (p. 97). Classic readings that view “gods” in vv. 6–7 as speaking of human judges and contemporary religio-historical readings that view them as deities are evaluated. Moberly then offers a fresh reading of this psalm as “a conceptual analysis of what is, and is not, meant by the term ‘ělōhīm … conveyed in imaginatively concrete form rather than in a theoretical or abstract mode” (p. 109). He suggests that Psalm 82, among other texts, presents justice as a criterion for discerning and entering into the presence and way of God.

Chapter 4, “The Inscrutable God,” focuses on Genesis 4:1–15. Moberly argues and demonstrates that the narrative could also be meaningful if the question of why God favored Abel’s offering over Cain’s is acknowledged as inscrutable, and attention is directed towards how Cain handled God’s guidance on being an unfavored one. Moberly suggests that “the issue at the heart of the story of Cain and Abel is not the avoidance of being half-hearted or only giving the second best to God.… Rather, the issue is how to handle life in a world where some are more favored than others and, especially, how to cope with being, in one way or another, the one who is unfavored” (p. 135).

The fifth chapter, “The Only God,” turns to the story of Naaman’s healing in 2 Kings 5 to reflect on the significance of his confession in v. 15 in relation to the term “monotheism.” Views on Naaman’s requests for Israelite soil and to genuflect in the temple of Rimmon are assessed to consider how Naaman’s requests might continue to inform Christians seeking to live faithfully in challenging and hostile circumstances. The final chapter, “The Trustworthy God,” deals with Psalm 46, Jeremiah 7, and Micah 3, with particular focus on their distinctive voices concerning the security of Jerusalem and its temple. The chapter reflects on how and why trust in God might become self-serving and how it might be authentic and sustained. Along the way, Moberly discusses accounts of Zion’s theology by Jon Levenson and Konrad Schmid.

So, in what way is this work valuable? First, much has been written in recent years about theological interpretation of Scripture. This often talked about discipline is here masterfully and elegantly practiced by Moberly. In other words, for very fine examples of theological interpretation of Scripture, consult this book. Second, Moberly’s close readings and theological reflections of biblical texts are exemplary, being instructive, imaginative, and thought provoking. He has a knack for articulating familiar texts in fresh ways and finding ways forward in interpretative impasses by reframing and weaving together insights, concerns, and debates across different disciplines. Third, sophisticated hermeneutical notions and issues are handled in an accessible manner and in the service of reading Scripture. Fourth, there is much here that preachers will find suggestive and helpful. Moberly renders the gap between the Old Testament texts he considers and our contemporary (postmodern) world less apparent. In sum, scholars, students, and pastors will find here treasures that inspire and instruct thought, prayer, vocation, and life. Admittedly, I was initially rather disappointed that in a book about the God of the Old Testament, Moberly does not return to his earlier studies on God’s self-disclosure in Exodus 32–34 (At the Mountain of God: Story and Theology in Exodus 32–34, JSOTSup 22 [Sheffield: JSOT Press, 1983] and “How May We Speak of God? A Consideration of the Nature of Biblical Theology,” TynB 53 [2002]: 177–202). However, I discovered later in the epilogue that Moberly gives a brief account for this lacuna. Nevertheless, I hope he will revisit Exodus 32–34 in future works.