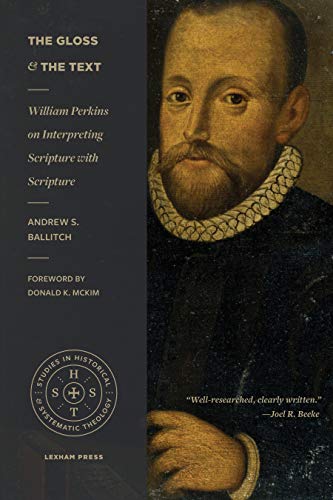 The Gloss and the Text: William Perkins on Interpreting Scripture with Scripture

This book is a light revision of the author’s 2017 doctoral dissertation from the Southern Baptist Theological Seminary. It examines William Perkins’s interpretation of Scripture as seen across the full range of his written works. Ballitch’s main historiographical foil is Donald McKim, who argued that Ramism held a central place in Perkins’s interpretive arsenal (Ramism in William Perkins’ Theology [New York: Peter Lang, 1987]). Yet it is worth noting that McKim, in a fine display of scholarly generosity, has written a short foreword to Ballitch’s present work. Against McKim’s argument for the centrality of Ramism, Ballitch contends that biblical exegesis and Scripture itself were the animating principles behind Perkins’s written corpus. In making his argument, Ballitch also aims to combat charges against Perkins of rationalism, eisegesis, and proof-texting. He states, “While the central role that Scripture played in [Perkins’s] thought has been recognized, that exegesis was at the heart of all his efforts has yet to be demonstrated. I intend to fill this gap in the historiography” (p. 17).

This rather fine distinction between Scripture as central and exegesis as central animates the book’s argument. Ballitch bases his argument regarding the centrality of exegesis on a statement by Perkins himself. In The Arte of Prophecying, Perkins said that the Bible should be interpreted with three tools: context, collation, and the analogy of faith. Ballitch’s work is essentially a sustained argument that when Perkins wrote this, he told the truth. Perkins, according to Ballitch, stayed consistent with his own stated interpretive ideals, regardless of what genre he was writing in. In other words, across Perkins’s corpus, one can see him interpreting Scripture by paying attention to context, by comparing Scripture with Scripture (collation), and by staying within a Reformed understanding of the analogy of faith.

Chapter 1 lays out this thesis against the backdrop of previous historiography and offers a brief analysis of the approach to Scripture laid out in The Arte of Prophecying. Chapter 2 then turns to give a broad overview of Perkins’s exegetical method, briefly comparing him to patristic, medieval, and earlier reformed antecedents. The next four chapters constitute the heart of the argument and attempt to prove Ballitch’s thesis by examining Perkins’s works in thematic groupings and arguing for the centrality of biblical exegesis across all of them. Chapter 3, therefore, looks at Perkins’s sermons and his commentaries, all of which originated as sermons. Perhaps unsurprisingly, Ballitch finds exegesis central in these works and argues that Perkins consistently uses his three stated methods. Chapter 4 examines Perkins’s practical works, such as those dealing with conscience and the assurance of faith. Chapter 5 looks at theological works, such as Perkins’s famous A Golden Chaine, and treatises on free will and predestination. Chapter 6 closes by examining polemical works, including those written against the Roman Catholic Church, such as A Reformed Catholike, and works that Perkins wrote against witchcraft and astrology. In all these genres, Ballitch repeatedly contends that exegesis is central to Perkins’s efforts and that he consistently interprets Scripture according to context, collation, and the analogy of faith. A short conclusion then restates Ballitch’s argument and briefly suggests some questions his work has left unanswered.

Ballitch’s study would serve well as a helpful entryway into the works of Perkins. Much of the book essentially consists of summaries of the contents of Perkins’s numerous works. By reading Ballitch, one can easily gain a sense of the full range of Perkins’s published endeavors and the concerns they address. Ballitch also writes lucidly and with a clear, logical flow, which admirably mirrors Perkins’s style.

While Ballitch summarizes Perkins’s writings lucidly, as a reader, I did wonder if the range of works he chooses to address hindered his argument. For example, some of Perkins’s works are treated so briefly as to be covered in less than a single page (e.g., pp. 133, 137–38, 140–41). This leaves little room for true analysis, and the reader must often take Ballitch’s word that biblical exegesis was central to these writings. Further, occasional arguments seem to strain credulity. Ballitch, for example, contends that all of Perkins’s 1597 work, A Reformed Catholike, is simply an extended exposition and application of a single verse, Revelation 18:4 (p. 196). Yet the work is more than 350 pages long! This begs the question of what legitimately counts as exegesis, a methodological question that the study never addresses. Finally, when Ballitch searches for Perkins’s English intellectual context, he relies solely on works written in or translated into English (pp. 48–54). Perkins, however, often wrote, spoke, and read in Latin, as did a great many of the English (and continental) contemporaries that he read. Examining only works written in English, therefore, gives a lopsided view of Perkins’s intellectual world.

Despite these misgivings, Ballitch argues a straightforward thesis and writes with great clarity. His book could also serve as a helpful primer on Perkins’s written corpus. Ballitch succeeds in showing any who are skeptical that Perkins was deeply steeped in biblical exegesis. However, in doing so, he only minimally accounts for other sources of intellectual and cultural influence on him, Ramism included.