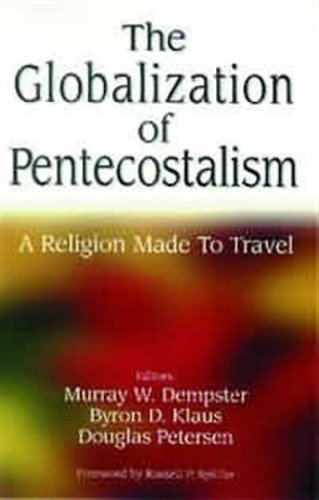 The Globalisation of Pentecostalism A Religion Made to Travel

This is a compilation of sixteen chapters, most more than 20 pages long, including generous helpful endnotes, analysing characteristics and developments within and relating to Pentecostalism on the world scene. As such, it is another landmark in the critical assessment of Pentecostalism mainly by scholars from within its ranks, though, given the title of the volume, it was surprising that only five are not working in North and Central America whilst only one of the respondents is based in Britain. One suspects that the reliance on North American contributors will rapidly change, given the globalisation of Pentecostalism, especially in its concentration in the two thirds world.

The book is split equally into three sections. It covers the era of Azusa Street and also discusses the Toronto phenomenon; discusses missiological issues and ecclesiological concerns; questions features precious to Pentecostals whilst also tenaciously holding to others; provides academic analysis whilst, via Harvey Cox, reminds Pentecostals to maintain their spiritual heritage and moral integrity by not allowing the modern world to detach them from their roots.

The first section concentrates on changing paradigms in Pentecostal scholarly reflection. The first chapter, written by Frank Maachia, surveys the development of critical thinking among Pentecostals within the areas of theological and biblical reflection, Spirit baptism, divine healing and eschatology. Given the fundamental nature of these issues to Pentecostalism and noting the paradigm shifts being entertained and initiated by Pentecostals with regard to these and other topics, the chapter acts as a market for that which follows in the chapters to come.

Pentecostalism is global because it is diverse and because Pentecostals are recognising that a doctrinaire approach to integral subjects is not healthy and less authentic than a self-assessment that incorporates an awareness of its multi-culturality as noted in Everett Wilson’s chapter in which he explores the Pentecostal identity. Wonsuk Ma’s bibliographical resource chapter concerning the theological development of Pentecostalism demonstrates the self-analysis and transparency of contemporary Pentecostalism that is resulting in changing paradigms. As long as Pentecostals stimulate the agenda, these paradigms will not be forced upon them but be of their own making.

This book illustrates the process that is currently taking place, at least in the more scholarly environs of the movement. The challenge ahead is how to transfer and translate this development into mainstream Pentecostalism which is increasingly being located in the two-thirds world, where the theological agenda is set by social, pragmatic and practical concerns, as explored especially in section two.

The second section provides an overview of Pentecostalism as a global culture while the third explores issues facing Pentecostalism in a postmodern world, reflecting on hermeneutics, church leadership, prophecy, the role of women, ecumenism and religious experience.

Given the number of Pentecostals (450 million) and the diversity of beliefs and praxis within Pentecostal culture, the editors are to be commended for seeking to offer specific insights into contemporary Pentecostalism despite its being such a heterogeneous phenomenon. As an insight into a movement that, at least in its academic echelons, is talking to itself in the language of academic reflection whilst still tenaciously holding to a Spirit theology close to its centre, this will be a fascinating journey for any reader who has the time to read it, a chapter at a time.