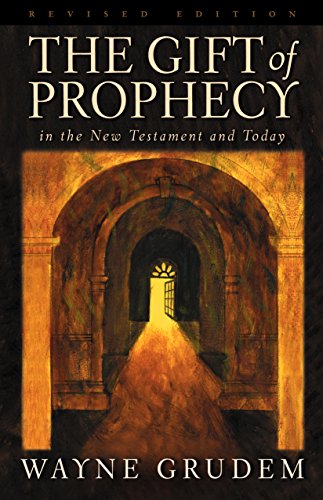 The Gift of Prophecy in the New Testament and Today

Wayne Grudem’s Cambridge PhD thesis was a careful exegetical discussion of the gift of prophecy in 1 Corinthians. That dissertation, only modified by the addition of two short sections on apostleship and Ephesians 2:20, was subsequently published by University Press of America (1982: and reviewed by this reviewer in Evangelical Quarterly 58 (1986), pp. 368–370), and its findings have already been disseminated to the church, in part, in several excellent less technical works by Don Carson, Roy Clements and others.

It is a token of the importance of the subject for the church today that Dr Grudem (now teaching Systematic Theology at Trinity Evangelical Divinity School) has been called to rewrite the whole thesis at a semi-popular level, elucidating more fully a number of points that were only implicit in his earlier writing, and spelling out clearly (and most graciously) the significance of his findings for the church (‘charismatic’ and ‘non-charismatic’) today.

Essentially Dr Grudem believes that two opposing sides—‘charismatics’ who insist that prophecy is for today, and ‘cessationists’ who say it was for the early church alone—both stand for right principles, but are drawn into conflict largely because of their misunderstanding of the nature of NT prophecy. That is because they both generally understand New Testament prophecy principally by the model of canonical Old Testament prophecy, and thereby misunderstand it. OT canonical prophets gave the word of God in the very words of God. Hence, e.g., they used the formula, ‘Thus says the Lord, “I say …” ’; so to disobey them was to disobey God’s revelation, and hence, too, false prophecy was a capital offence (so Grudem, ch. 1). When ‘charismatics’ use the divine ‘I’ formula for prophetic speech today they thus imply (or are taken to imply) the words spoken are directly God’s words, with all his authority.

All this, the ‘cessationists’ feel, brings biblical prophecy into disrepute (because modern ‘prophecies’ are so often banal, and not infrequently prove false) and jeopardizes the primacy of Scripture as God’s authoritative word for the church today. In that fear they are surely right, Grudem concurs. But they are wrong to oppose ‘charismatics’ with the claim that the NT expected the cessation of prophecy in the post-apostolic church: the NT writers expected prophecy to continue to the end (so Grudem, ch. 12). Rather, the finality of the canon is preserved when we recognize that what the NT writers meant by ‘prophecy’ (when they referred to the phenomenon in ordinary NT churches) ‘was not equal to Scripture in authority, but was simply a very human—and sometimes partially mistaken—report of something the Holy Spirit brought to someone’s mind’ (p. 14). Grudem sharpens this up exegetically (chs. 3–7) to show that (for the NT writers) ordinary congregational prophecy was regarded as based in a revelation given by God to an individual (1 Cor. 14:30ff.; contrast ‘teaching’, which is (inspired) elucidation of Scripture/Tradition—see ch. 6), but a revelation that was perhaps as incomplete, indirect and hazy as the image seen in dull polished-metal Corinthian mirrors (1 Cor. 13). Further distortion or error may be introduced as the one who receives the revelation attempts to put what has been ‘revealed’ into speech. Thus, for example, the disciples who ‘through the Spirit told Paul not to go to Jerusalem’ (Acts 21:4) may have rightly foreseen, by revelation, that suffering awaited Paul in Jerusalem, but wrongly expressed what they saw as a prophecy that he should not go there. Agabus perhaps rightly saw Paul bound, and in the hands of the Romans, but wrongly expressed it as a prophecy that Paul would be bound by the Jews and handed over by them to the Gentiles (21:11)—he was in fact rescued by Lysias’ soldiers from a Jewish mob who were trying to kill him (Acts 21:32ff.).

Because prophecy was a charisma of mixed quality, it needed to be weighed and the good retained; and, in contrast to the quite different OT situation, it would no longer be fitting for an Agabus to be stoned for getting even major elements wrong. Prophecy was indeed so prone to fallibility that in Thessalonica it was liable to be despised (1 Thes. 5:20). Because it was not authoritative the gift was open to women (1 Cor. 11), while judgingprophecies (1 Cor. 14:33f.) was debarred them precisely because it was an authority function (so Grudem, ch. 11).

The implication for today is that charismatics should by all means continue to expect prophecy, but should refrain from giving their prophecies with formulae that suggest the Lord is speaking directly through them (e.g. ‘Thus says the Lord’ or ‘I’ formulae: and Grudem is supported here by many leaders within the charismatic movement). By the same token, the ‘cessationists’ need not fear ‘prophecy’ understood this way; indeed, it finds a direct analogy in their own sense of being ‘led’ by the Spirit, whether in being given direction with respect to future ministry or to speak a mot juste to another Christian or to a whole congregation, or whatever. None of these activities jeopardizes the primacy of Scripture’s authority, which is absolute and brings us God’s very words. In this respect, Grudem argues, it was the apostles (not ordinary NT prophets) who inherited the mantle of fully authoritative revelatory prophecy (chs. 2 and 9). So Grudem can finish with chapters encouraging ‘prophecy’ today—and its careful regulation—for both ‘charismatic’ and ‘cessationist’ congregations.

There is a lot of ground covered by the book, and little opportunity in a short review to enter into detail (for more of which see, e.g., Vox Evangelica 15 (1985), pp. 7–64). Some aspects of Grudem’s argument appear questionable, most particularly in chapter 2. Thus, the reader may agree with Grudem that Paul considered his gospel to be God’s word, and his own apostolic teaching to have great authority for his churches—certainly to have an authority over that of the Corinthian charismatics, whose charismata he subordinates to his own apostolic advice. And, beyond that, he may happily affirm with Grudem (and 2 Peter!?) that Paul’s writings are infallible inspired Scripture. But he may not so easily be convinced that Grudem has really demonstrated, from what Paul himself says, that the apostle considered his very words to be infallibly inspired and that he saw himself as having inherited the mantle of the OT prophets in being the conveyor of the very words of God (and the appeal to 1 Cor. 2:13 surely entirely misses Paul’s irony: see e.g. G.D. Fee’s commentary, ad loc.). Nor are many liable to be as confident as Grudem of the probability that the word ‘apostle’ was chosen by Jesus because of an alleged semantic weakening of the word ‘prophet’ (in respect of some such putative component of meaning as ‘carrying full divine verbal authority’); nor, for that matter, that ‘apostle’ would necessarily have better conveyed such meaning. It seems to me the whole argument that NT apostles correspond to OT prophets, and that this guarantees the divine authority of their witness and general advice (not merely their prophecies), while suggestive, is not without considerable difficulties. There is room for further thought here.

No doubt one could find plenty of other quibbles beyond chapter 2. Thus, for example, Grudem often illustrates his view of the mixed nature of NT prophecy by appealing to the case of Agabus who, according to Grudem, is recorded as giving a prophecy that proved wrong in two important details (Acts 21:11—see above). But it is frankly implausible that Luke considered Agabus’ prophecy about Paul to be mistaken, not least since he later has Paul himself claim, ‘Though I have done nothing against the people or the customs of our fathers, yet I was delivered prisoner from Jerusalem into the hands of the Romans’ (Acts 28:17)—a statement which clearly sums up the whole affair in a way that is intended to indicate the overall responsibility of hostile Judaism for Paul’s present plight, if not to indicate the precise historical mechanics of it; and as such it asserts a fulfilment as close to Agabus’ prophecy as even an OT oracle could reasonably be expected to be.

But such quibbles are indeed of relatively minor significance. I think Grudem has made a substantial case for the view that congregational prophecy in the NT was not considered the authoritative form of communication it was in (the majority of) the OT, and that his exegesis of the phenomenon is fundamentally along the right lines. And as such he has not only made a contribution to NT research, but has paved the way towards reconciling two opposed movements within today’s church. It is a delight to be able to commend a book that is so readable and significant, especially when one can at the same time wholeheartedly invoke the Lord’s blessing of peacemakers.