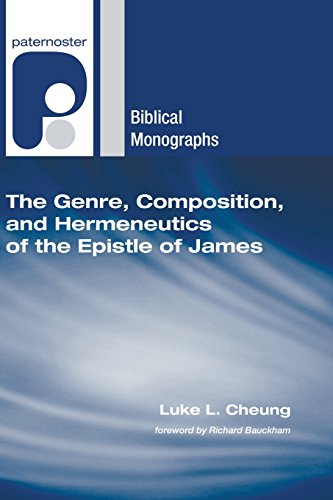 THE GENRE, COMPOSITION AND HERMENEUTICS OF JAMES

This monograph is a revision of a doctoral thesis carried out under the supervision of Richard Bauckham. It makes a major contribution to studies on the letter of James, following on from the recent work by Luke Johnson and Bauckham himself that have allowed the letter of James to speak for itself out of shadow of comparison with Paul on the issue of faith and works (cf. Jas 2:14–26). It breaks new ground in understanding the argument and structure of the epistle and also makes a contribution to the present scholarly trend of understanding the epistle in relation to the Jesus tradition and comparable Second Temple literature.

The work begins with a study of the genre of James; where all major attempts at classifying James are discussed with particular attention paid to the influential work of Martin Dibelius. The author argues strongly for seeing James as Wisdom instruction, giving due attention to the abundance of imperatives, the catchword construction and the use of traditional materials. The objection to this hypothesis, that the prevalence of eschatology in the epistle is incompatible with the Wisdom genre, is overcome by Cheung who highlights the eschatology of the Wisdom of Solomon and especially the Qumranic material, to show that this is no valid objection to identifying James as Wisdom Instruction.

He concludes this section by outlining the relation to social setting, and sees to objection to authorship by James, the brother of the Lord. He takes seriously James 1:1 as indicating the letter is a circular letter written by James from Jerusalem (in a tradition of such letters) to the messianically renewed people of God in the Diaspora.

Cheung then moves to treat the composition of James. Again, there is a review of scholarship, and in his discussion, he finds a greater deal of cohesion to the letter than many previous attempts (particularly that of Dibelius) and sees the themes of Law and Shema as central to its composition.

Then Cheung turns to treat the themes of Law and Wisdom in James. This section is full of interesting insights and instructive parallels to the literature of Second Temple Judaism. Especially noteworthy is his comparison of the treatment of the Law in James and Matthew. He emphasises the centrality of the love command, and the corresponding emphasis on mercy as showing the influence of Jesus on his brother.

Cheung then turns to the eschatology of the book of James, showing that it is not a side issue, but integral to the outlook of the work. This is explored in terms of the outlook and self-understanding of the community (cf. 1:1) and in the motivation for ethical behaviour.

There is very little to criticise in this study, which is a goldmine to those involved in study on the epistle or those with a general interest. The style is dense and yet readable, and attention given to this work is rewarding, James is rightly treated in its own right, not merely in relation to Pauline theology, and is shown to have a distinctive voice, that takes its place in early Christianity, decisively influenced by Jesus. This work represents a substantial contribution to Jamesian studies and comes complete with a very helpful and full Bibliography of works on the Epistle.